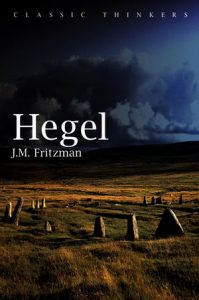 William Sharkey is a research student at the University of Southampton. He is currently working on …

Fritzman opens his book with the bold assertion that philosophy has had “only two heroic moments – times where it cast aside everything that is external and became fully itself” (1). Such controversial and unqualified assertions are ubiquitous throughout the work and readers with a penchant for rigour may find themselves frequently at odds with the author. The purpose of such a claim is to begin the process of locating Hegel historically, specifically, in relation to the previous philosophies of Plotinus and the Neo-Platonists generally, right through to the contemporary McDowell – the ‘locating’ section proper begins in chapter two ‘Hegel’s Life and Influences’.

After some considerable, useful, pre-amble – in which outlines of the divergence and points of tension between the ‘metaphysical’ and ‘non-metaphysical’ readings of Hegel are offered – Fritzman, correctly, identifies Aristotle, Spinoza, Kant, Herder and Schelling as the most important influences on Hegel (some may be tempted to add Parmenides to the list, but that is neither here nor there). Fritzman’s tactic here is to give a brief account of a certain philosophy (for example, the philosophy of Heraclitus) and then tack on to this a quick sentence relating Hegel, for example:

Given the quickness of the account, Fritzman fails to give a qualified and accurate account of what is going on in Hegel (this will come later, Fritzman – in several ‘forward gestures’ – assures us). As such his accounts are often lacking to the point that they are unrecognizable as Hegelian. Indeed, Fritzman’s account of the (in)famous Hegelian ‘Absolute’ is just plain incorrect, it conveys a surface tension that appears contradictory to the reader, yet could easily be overcome with just a little more precision in the exegesis. Problems of exegesis are not restricted to discussions of Hegel. His outline of Spinoza (amongst others) is highly problematic; at one point Fritzman claims that “Spinoza denied that there is a free will”. While it is certainly true that Spinoza denies what Hume refers to as the ‘liberty of indifference’ (man is not, Spinoza famously tells us, a dominion within a dominion), it is certainly untrue that Spinoza denies that there is freedom as such. His conception of freedom is the lack of external determination coupled with the presence of internal determination. Man can (and does) achieve this to varying degrees and while it is true to say that no man can, for Spinoza, be completely free it is equally true to say that no man is always completely unfree. To say that Spinoza does not believe in freedom is a gross oversimplification (and certainly, not something Spinoza himself would accept – especially given that the fifth part of the Ethics has the title: ‘Of the Power of the Intellect, or on Human Freedom’). Unfortunately, the whole of the second chapter is a series of oversimplifications, the result of which is that Fritzman doesn’t provide an accurate outline of anyone discussed. Instead the accounts offered are caricatures (something Fritzman himself says he is trying to avoid) and, most-damningly, unhelpful and ultimately misleading.

Indeed this seems to be the main problem with the book. No doubt, the author has tried to make his account of Hegel (and others) as accessible as possible. This has, unfortunately come at the expense of accuracy. It is a difficult task, even when dealing with a thinker who writes as clearly as Hume, to give an accessible and accurate account; and it is absolutely unenviable to be asked to do this of Hegel, whose thought is resistant to overviews and clarifications. Trying to deal with themes as conceptually loaded as the much-feared Logic narrative in no fewer than fourteen pages is not only ambitious, but wholly inadvisable (Fritzman treats both the Greater Logic and the Encyclopaedia Logic in the same section). It is impossible to summarize a work so complex in such a short space, one might as well try to summarize Kant’s first Critique in a few sentences.

However, it is the section dedicated to the Philosophy of Right that will most disappoint the reader. Many use this text as a ‘gateway’ to Hegelian thought – its style is a lot clearer, the narrative easier to follow, and its subject matter a little more ‘concrete’ and less opaque. This work, while certainly far from being an ‘easy read’, is probably the most accessible and, therefore, the easiest to get right. Fritzman begins problematically by dismissing the famous Preface, claiming that it was written simply to get the book passed the censors. This tactic is not unusual in Hegel scholarship: Hegel does, after all, appear to be defending the worst sort of conservatism and providing a terrifying justification for a never-ending status quo. Much has been made of the famous ‘tautology’, “The rational is actual, the actual is rational”, much of the sound and fury regarding this dictum has come from Hegelians themselves who claim (with a torrent of reasons) that this is actually a reference to his speculative metaphysics and the people who think this is a vulgar apologetic are ignorant of Hegel’s technical terminology (the actual, for example, is not that which simply exists). Fritzman, in perhaps the worst exegesis of Hegel ever written, also fails to capture the meaning of the ‘owl of Minerva’ passage in which Hegel’s outline of history is summarized.

Even more startlingly, Fritzman tells his reader: `As we know by now, Hegel likes to punctuate things by threes. It comes as no surprise, then, that the Philosophy of Right is divided into Family, Civil Society, and State.’ (111) Fritzman is quite correct to inform his reader that the Philosophy of Right is divided into three sections (if one ignores both the Preface and the Introduction), however, a cursory glance at the table of contents reveals that Hegel labelled these sections Abstract Right, Morality, and Ethical Life, the last of which deals with Family, Civil Society, and The State. The only sense that can be made of Fritzman’s outline is that he owned an aggressively abridged copy of the work. This is unfortunate as it is within Abstract Right that Hegel gives us his interesting and sophisticated (indeed, many would argue ‘unsurpassed’) account and justification of private property. Abstract Right also contains sensitive and insightful discussions of crime and punishment (on the latter, to be fair, Fritzman does offer some summary comments). It is in Morality that many of the most carefully developed criticisms of Kant’s moral philosophy were ever articulated. While doing Hegel a disservice by not discussing these issues (are we not still discussing the legitimacy of private property and the justification/role of punishment?), Fritzman does Hegel even more of a disservice by failing to give an honest account of his more shameful shortcomings: ‘there is no reason to believe that Hegel – the text, if not the man – would be opposed to women also having jobs and careers’ (111). Unfortunately, feminists (and others who have read the Philosophy of Right) have not failed to notice the rampant misogyny in Hegel:

Women may well be educated, but they are not made for the higher sciences, for philosophy and certain artistic productions which require a universal element. Women may have insights, taste, and delicacy, but they do not possess the ideal. The difference between man and woman is the difference between animal and plant […]. When women are in charge of government, the state is in danger, for their actions are based not on the demands of universality but on contingent inclination and opinion […] (Philosophy of Right, §166A)

Alas, it appears (to his eternal shame) Hegel ‘the text’ does oppose women having jobs and careers.

Throughout this, and almost every chapter, Fritzman bullet-points Hegel’s conclusions/assertions. The chapter takes the form of ‘Hegel thinks x’, ‘Hegel does not believe y’. This is a shame as many of Hegel’s views are controversial in isolation and can only be made sense of by relating them to his arguments and qualifications. Indeed, the richness of Hegel’s account has been entirely stripped in Fritzman’s treatment and the reader is left, ultimately, with an incredibly impoverished sense of who Hegel was and what he thought. Readers will be left completely confused as to why Hegel was so influential, and why it is still worth reading him today.