Marx & Philosophy Review of BooksReviews‘Beyond the Left: The Communist Critique of the Media’ reviewed by Sheryl Bernadette Buckley 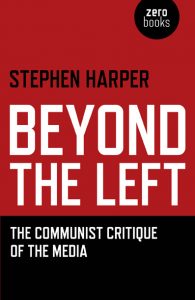 Stephen Harper
Beyond the Left: The Communist Critique of the Media

Sheryl Bernadette Buckley is a final-year PhD student at the University of Salford. Her thesis …

Stephen Harper’s work is unapologetically and refreshingly bold. Moreover, it is highly engaging, not least because of its arguments, but also because of its relevant examples. It opens with a quote from Edward Bernays, whom Harper describes as the ‘American father of public relations’, and who states that the power of the media has the capacity to ‘pull the wires which control the public mind’ (1). Harper’s own politics are immediately clear. He informs us that ‘capitalism today is an obsolete system whose continuance offers humanity only increasing misery’ (4). From that starting point he builds a convincing case for the need to make fundamental changes to the existing system, although he is alert to the public perception of communism as something that is ‘decidedly unfashionable’ (2). Harper acknowledges that the book may be perceived as ‘biased’; but he feels that as ‘capitalism drags humanity towards annihilation … political neutrality is hardly an option’ (5).

Harper rapidly establishes the central argument of the book, which is that the power of the dominant media, motivated by commercial interest, has successfully constructed the ‘news’, the main purpose of which is ‘to uphold the capitalist status quo’ (4). This argument is not new, but Harper uses it as a catalyst to make his main, and most original, point: that not only is the advance to communism impeded by the media oligarchy, so too is capitalism perpetuated by the so-called ‘left wing’ press. Thus, Harper writes that ‘journalists and the left-liberal commentariat – in their advocacy of such shibboleths as “humanitarian intervention”, ”national defence”, ”green politics”, and ”anti-fascism” – play an even more insidious role in the ideological justification of capitalist social relations than the system’s right-wing apologists’ (4).

Harper uses various case-studies to make his argument. The thematic structure of the book works particularly well: the chapters are generally short, pithy and engaging. There are twelve in all; three are particularly good at making the author’s argument. The first example that Harper uses concerns immigration. The book appears to have been finished in late 2010. Anti-immigration was the order of the day, and the primary issue on the political agenda (34). At the time of writing this review, the media has reported the recent deaths of migrants at Tilbury. Harper’s examples, then, continue to be applicable. There is nothing new in his observation that the media vilifies immigrants; but, as in other examples, Harper extends this argument to serve his broader purpose. He contrasts the BBC Panorama programme, Is Britain Full? (9 April 2010) with Philippe Legrain’s article in New Statesman, where Legrain suggested that immigrants contribute to society, because they would do the jobs that indigenous people would not (34). Harper argues that the dominant discourse of the left in relation to immigration has undermined the left’s cause; instead, he suggests, the focus of the left should be on a reversion to Marx’s claim that workers are not bound by geographical borders (33).

The second example, which is particularly effective, is Harper’s discussion around the theme of war. This is particularly poignant in 2014, the centenary of World War One. Harper draws on a televised interview with Harry Patch, the last surviving veteran of the conflict, which was recorded in 2005. Patch, claims Harper, represents ‘working class principles of international solidarity’ (61), and Patch himself remarked that ‘if two governments can’t agree, give them a rifle each and let them fight it out’ (61). But Harper demonstrates how, upon his death in 2009, Patch was made emblematic of heroic militarism. This example is contrasted with Michael Foot, who Harper argues was positively pro-war (62). But when Foot died, in early 2010, he was commemorated as a ‘man of peace’ (62). Taken together, Harper claims, both these examples demonstrate the capitalist media’s ability to distort reality. As well as drawing on these two individuals to make his point, Harper uses various other conflicts to show that, in the post-Cold War period, wars have often been portrayed as ‘humanitarian interventions’, and not as the ‘imperialist wars’ that they actually are (63).

Another of Harper’s detailed case-studies is of ‘the fascist threat’. Using the example of Nick Griffin’s appearance on Question Time in October 2009, Harper suggests that the BBC played the role of anti-fascist prosecutor perfectly (74). But, rather than acting as responsible custodian of moderate political activity, the BBC turned the Griffin appearance into something of a charade (80). This, argues Harper, was to deflect attention from ‘the repressive nature of political parties’. (74) The ultimate purpose of these efforts, Harper claims, was to present the 2010 General Election as a showdown between ‘the legitimate agents of “democratic” freedom and the dark forces of fascist tyranny’ (80). This example demonstrates Harper’s central argument, that the media were able to manipulate the fascist threat in order to legitimise the capitalist state. As Harper has already argued that all the main parliamentary parties sustain capitalism, the result of the BBC’s handling of the Griffin interview and its subsequent role in the General Election, was to create a ‘dangerous mystification of political reality’ (81).

As well as making an interesting argument, Harper’s work also has a use for those wishing to understand fundamental Marxist concepts. The first three chapters establish a theoretical framework for the book, and they combine this with engaging examples so that they are accessible to readers, even those who may not be overly familiar with the concepts. One of the initial concepts that Harper explores is that of ‘class’. Harper uses the example of John Prescott’s documentary, John Prescott: the Class System and Me (2008), to show how Prescott eats chips and drinks beer in an effort to retain his working-class roots; but through this example Harper argues that class is not measured by lifestyle. Instead, it can (and should) be conceived according to Marx’s basic criterion, that to be working class is to be somebody who is obliged to sell their labour in order to exist (11). This example is tremendously effective in demonstrating Harper’s point, but it also makes Prescott emblematic of a broader problem for the radical left: namely that under liberal democracies the perception of relative wealth has weakened the class struggle.

‘Not neoliberalism: why the state is still the enemy’ explores the concept of the state, and how it functions as a source of oppression (13). The fact that the state is controlled by the capitalist class, Harper argues, is clear through what he calls ‘the charade of elections’; the fact that, in a parliamentary system, the various political parties all serve ‘the interests of the national bourgeoisie’ (14). Harper’s personification of the state as ‘centaur-like; half-beast and half-human’, is an effective image to suggest that the state is able to mix both repression and propaganda to achieve its overall aim of oppression (16).

Harper’s book is a captivating read which uses engaging examples to make its central argument. The author is unapologetically clear about his own political stand, and this helps to give the book an identity that is often missing in what might be called more ‘moderate’ or ‘unbiased’ texts. Harper is passionate about the arguments in the book, and because the work uses relevant examples that readers can follow, it is not a heavy read. Harper’s choice of publisher adds to the sense of the book’s almost maverick qualities. The final page of the book is given over to a note from Zer0 Books, which says: ‘Zer0 books knows that another kind of discourse – intellectual without being academic, popular without being populist – is not only possible: it is already flourishing, in the regions beyond the striplit malls of so-called mass media and the neurotically bureaucratic halls of the academy’ (115). Harper’s work is a perfect example of these qualities.