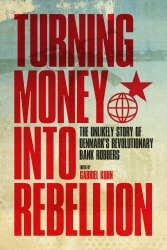 At the end of the 1980s five men robbed a cash-in-transit vehicle in Copenhagen, stealing over thirteen million crowns. The subsequent investigation led to the discovery of an apartment in the district of Blekingegade that contained: ‘crystal radio receivers, transmitters, and antennas; masks, false beards, and state-of-the-art replicas of police uniforms; numerous false documents and machines to produce them; extensive notes outlining the … robbery and other unlawful activities; and – in a separate room, accessible only through a hidden door – the biggest illegal weapons cache ever found in Denmark.’ (3)

Unimaginatively dubbed the ‘Blekingegade Group’ based on the location of the apartment, the five suspects in the robbery turned out to be undercover revolutionaries who had been carrying out various robberies for close to twenty years in order to help fund third world Marxist revolutionary movements. A small and clandestine group within a Marxist organization that based its praxis on a particular understanding of Lenin’s theory of the labour aristocracy, the Blekingegade Group spent decades providing material support for organizations such as the Popular Front for the Liberation of Palestine.

The story of the Blekingegade Group, though largely unknown outside of Denmark, has seized the imagination of the Danish public, particularly in recent years after the release of a two-volume history of the group by Danish journalist Peter Øvig Knudsen in 2007 and, due to this book’s popularity, a subsequent television documentary. It is in this context that Turning Money into Rebellion, edited by Gabriel Kuhn, was written. Composed of an essay and interview with the group’s surviving members, as well as excerpts from some documents by the group’s above-ground organizations, Turning Money into Rebellion is intended not only to introduce the story of the Blekingegade Group to English speakers but to counter Knudsen’s liberal narrative.

In this review I want to focus on a few salient aspects of this book: i) its unique window into the past anti-imperialist movement when people were convinced that capitalism’s defeat was close; ii) its relevance to contemporary debates about the theory of the labour aristocracy; iii) its existence as a possible counter-narrative to a mainstream discourse about anti-imperialist action.

From the 1960s until the 1980s there was a worldwide anti-imperialist movement that witnessed the emergence of a variety of people and organizations in the first world who, convinced that third world revolutionary movements were leading the struggle against a moribund capitalism, attempted to place their theory and practice within this context. Some of these groups – the Red Army Faction (RAF) in West Germany, the Red Brigades (BR) in Italy, the Weather Underground Organization (WUO) in the United States, etc. – took to heart Che Guevera’s remark about making revolution ‘in the belly of the beast’ so as to destabilize imperialism from within. Other groups and individuals – such as the Japanese Red Army (JRA), Carlos, and others – went to the global peripheries and worked directly under the political command of third world guerrilla movements. The members of the Blekingegade Group, however, embarked on a different strategy: rather than emerging in Denmark as an urban guerrilla front, they chose to disguise their practice as purely criminal – releasing no communiques, no explanations of their activities at the time – and functioned solely to provide material support for those movements they felt were leading world revolution.

The reason for the Blekingegade Group’s particular practice was based on its political assessment of Denmark and the entire first world. Originally belonging to the Maoist-identified Kommunistisk Arbejdskreds (KAK), these undercover revolutionaries were convinced of the KAK founder, Gotfred Appel’s ‘parasite state theory’ that ‘claimed that the working class of the imperialist countries had become an ally of the ruling class due to its privileges in the context of the global capitalist system.’ (4) Under the impression that there was no point in organizing a working class that benefited from global oppression, and therefore had far more to lose than its chains in the event of a revolution, Appel – and hence the people who would become part of the Blekingegade Group – decided that the revolutionary subject was located in the third world and that, in order to be properly revolutionary in the first world, it was the duty of anti-imperialist communists to do anything possible to support Marxist movements in the global peripheries. Since far more material support could be accumulated by robbing the state, a clandestine group eventually emerged within the ranks of the KAK that, after making contact with several third world organizations, embarked on the path that would lead to their arrest at the end of the 1980s.

As some readers might have noticed, the parasite state theory prefigures a long-standing Marxist debate about whether or not the working class at the centres of global capitalism, benefiting from the super-exploitation of imperialism, are what Lenin once called a ‘labour aristocracy’ and thus no longer proletarian. This debate regarding the existence of a labour aristocracy has most recently manifested in the exchange between Zak Cope and Charles Post, but possesses an earlier theoretical basis in the work of theorists such as Arghiri Emmanuel and Immanuel Wallerstein. Indeed, the former even wrote an introduction to a document produced by the Manifest-Kommunistisk Arbejdsgruppe (M-KA), the organization that split from the KAK and that contained the members of the Blekingegade Group: Imperialism Today: Unequal Exchange and the Possibilities for Socialism in a Divided World.

Hence, Turning Money into Rebellion offers an earlier perspective on this debate since it contains an excerpt from the aforementioned document, an essay by Appel on the parasite state theory, and a discussion by the surviving members about the significance of this theory in light of their own activities and the contemporary conjuncture. Whether or not readers agree with the above theoretical assessment, Turning Money into Rebellion is important because it demonstrates how a political line can and should dictate strategy. To proclaim that there is no reason to organize in one’s country due to a lack of revolutionary potential could, after all, produce inaction – a common charge leveled, rightly or wrongly, against people who make similar pronouncements today. The significance of the Blekingegade Group, however, is that its members discovered a way in which to put their theory into practice, perhaps the only way it could be put into practice: return the profit generated by imperialist super-exploitation to the peripheries, specifically to those communist organizations that appeared to be leading world revolution.

Although these undercover revolutionaries were eventually caught, and though the organizations they chose to support are no longer leading world revolution, so were the other anti-imperialist groups and individuals who possessed a different theory and practice. There are a variety of reasons for this worldwide collapse of anti-imperialist foment, all of which are beyond the scope of this review, but books like Turning Money Into Rebellion might be useful in teaching us something about these reasons, as well as excavating a history of resistance that is often obscured by mainstream narratives.

In recent years there has been a resurgence of books and films about this past period of anti-imperialism. Aside from the treatment the Blekingegade Group was given by Knudsen, there are also recent films such as Carlos and The Baader-Meinhof Complex (based on Stefan Aust’s book of the same name) that have garnered significant attention. The problem with this depiction of armed anti-imperialism is that, whatever we might think of the tactics involved during this period, these books and films are usually designed to promote the ideology that resistance against capitalism is useless and that those who resist are narcissistic psychopaths. The anti-imperialist revolutionary is depicted as an egocentric rock star, their politics are presented as vague, and the forces they are resisting are treated as a fact of nature. In such a context, whatever we might think of the theory and practice of such people, the publication of books like Turning Money into Rebellion are important because they provide a voice for the people who sacrificed decades of their lives attempting to bring a better world into existence. Effectively silenced by the mainstream narrative, forced to witness distorted depictions of their actions and beliefs, books that attempt to tell their story according to the way they saw the world allow us to recapture aspects of that revolutionary heritage the culture industry generally suppresses.

It is significant, then, that the first essay in Kuhn’s edited collection is entitled ‘It Is All About Politics’, written by three surviving members of the Blekingegade Group, is a response to the manner in which the official narrative of their activities silenced their political commitments. ‘There have been many stories circulating about the Blekingegade Group for the past twenty years,’ they write, ‘They aren’t going away. […] The media always returns to the subject and law enforcement officers and politicians are happy to jump on the bandwagon. They have a particular motive: a hatred of the left of the 1970s. Apparent “investigations” are actually part of a political battle.’ (91) Thus, Turning Money into Rebellion should be seen as part of this political battle, but from the side of those who struggled, according to the reality with which they were presented, on the side of the oppressed.