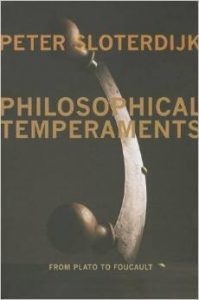 In Philosophical Temperaments: From Plato to Foucault, Peter Sloterdijk attempts to offer an alternative to the typical “history of philosophy”-style introduction by first introducing philosophy as “a way of thinking” (xviii). By exploring “a gallery of character studies and intellectual portraits” (xix), Sloterdijk presents this “way of thinking” as the interaction of the individual philosopher with his social and cultural milieu which produces a particular philosophical temperament, and in turn a particular philosophy. By presenting a multitude of diverse philosophical temperaments, Sloterdijk hopes to demonstrate that there are as many ways of “doing philosophy” as there are philosophers, since the possible convergences between individual personality and the wider culture are virtually limitless.

Philosophical Temperaments is divided into nineteen chapters, covering Plato, Aristotle, Augustine, Bruno, Descartes, Pascal, Leibniz, Kant, Fichte, Hegel, Schelling, Schopenhauer, Kierkegaard, Marx, Nietzsche, Husserl, Wittgenstein, Sartre, and Foucault. These vignettes were originally published as prefaces to primary philosophical texts, and as such they vary substantially in terms of content and style. Indeed, they were not compiled in Philosophical Temperaments because of any innate interrelatedness, and Sloterdijk admits that “something like a cohesive whole” (xviii) emerged only accidentally. What this means is that every chapter is highly individual: not only does Sloterdijk focus on different aspects, causes, or consequences of philosophical temperaments from chapter to chapter, but some chapters cannot really be said to deal with temperaments at all (such as the chapter on Bruno). Systematic assessment would be difficult, if not impossible. Thus, rather than treating every vignette contained in the book, this review will focus only on several which best exemplify and contribute to the main focus of the book: philosophical temperaments which emerge in the interplay between individual and society.

The first chapter focuses on Plato and is perhaps the best exemplar of the book’s purported focus. Sloterdijk observes that Plato’s youth coincided almost exactly with the Peloponnesian War, such that he “rarely experienced a world that was not distorted by the passions of war” (6). Thus, Plato’s “ominous distance from empirical reality and [his] idealistic tendency … to withdraw from the merely given are easier to understand” (ibid). Plato also grew to intellectual maturity in a world marked by “the emergence of a new, risky, and power-charged world system … that of urban cultures and empires” (5). Growing cosmopolitanism expanded one’s field of vision beyond the tribe and increased one’s awareness of the world as a “vicious marketplace of gods, customs, and opinions” (6). This changing perspective impacted both the content and temperament of Plato’s philosophy. In terms of content, Plato’s philosophy sought to transcend the temporal chaos of appearances “through an orderly return to secure foundations” (ibid), the “single, good unity” of Being (5); the “growing complexity of the world” is countered with “a continuous effort at expanding the soul” which allows the philosopher to “be at home everywhere” (ibid). Plato’s philosophical temperament can perhaps best be described as a “pious rationalism” aloof from the phenomena (3).

In the following chapter on Aristotle, Sloterdijk continues parsing out the implications of this new imperial cosmopolitanism by drawing a strong parallel between the nature and course of Alexander’s empire with the “intellectual empire” of his tutor, Aristotle. The latter’s “logical and empirical investigations … [constituted] Alexandrian campaigns of curiosity,” creating an “empire of knowledge” which, like Alexander’s empire, was bound to fragment into separate disciplines (16). Mirroring Alexander’s insatiable hunger to conquer all before him, Aristotle’s philosophical temperament was characterized by “asceticism … unflagging practice, [and] the daily exertion of the logical and moral powers” (15). One issue here is that Sloterdijk derives two markedly different temperaments from one, shared cultural background: whereas growing cosmopolitanism/imperialism and the experience of warfare created in Plato a certain rationalistic aloofness from the world, in Aristotle the same factors resulted in an enthusiastic empiricism, a joyful engagement with the world. This is indicative of a much more fundamental issue with the book: given the almost endless cultural, personal, and material factors involved in each philosopher’s particular situation, and given the often complex philosophical systems and temperaments under consideration, one can imagine nearly any relationship between the two that one wants. So, for instance, Bertrand Russell takes it as self-evident that Greek philosophy through Aristotle expressed a merely polis mentality, whereas it was not until the Stoics that there emerged a philosophy expressive of cosmopolitanism.

The chapter on Leibniz is one of the highlights of the book, as it contains a particularly clear illustration of the philosophical temperament and its production from cultural forces. Sloterdijk argues that the Leibnizian philosophical temperament was only possible when two factors converged. First, the “Baroque universal scholar,” men of “polyvalent scientific enthusiasm” such as Da Vinci and Giordano Bruno; second, the “courtly intellectual and multi-tasker,” the “argumentative diplomat” (37-9). These two historical ways of doing philosophy combined to create “the specific Leibniz effect – that marvel of intellectual polyathleticism in which the happily restless, proficiency-addicted, multi-focused intellect of the thinker radiated in all directions” (39). If the chapters on Plato and Aristotle demonstrated that philosophical temperaments can be produced by largely material causes (war and the expansion of empires), then the chapter on Leibniz demonstrates that “intellectual” or cultural causes can be just as crucial. Thus, Sloterdijk refuses to rely on simple explanations and recognizes that temperaments have a multitude of diverse sources.

The ninth chapter covers Fichte, and Sloterdijk depicts his particular philosophical content and method as largely a reaction against the dominant bourgeois culture. During Fichte’s career, Napoleon had conquered Fichte’s native Germany and established a “bourgeois empire” characterized by French materialism. However, bourgeois society is more basic and more pervasive than this particular manifestation, being “an alienated world, populated by beings whose roots of the ability to be free have been cut off by their erroneous belief in the autonomous, a priori existence of things” (48). Beset on all sides by this bourgeois “realm of the dead,” Fichte “countered with the foundation of his empire of the spirit,” seeking to resurrect the dead by removing the “veil of dogmatic and ontological delusion” and returning the subject to a state of authenticity (47). Philosophical emancipation would illuminate the “all-transforming dignity of subjectivity” (ibid). To be thus a “teacher of idealism in an age of the bourgeoisie” necessitated taking on the philosophical temperament of “thunderous eloquence, powerful discernment, and fanatical loyalty to an arduous fundamental idea” (46-7).

Sloterdijk’s section on Nietzsche connects the latter’s temperament and method to the “secular changes in the educational conditions of the modern world” (79). Sloterdijk argues that one of the defining characteristics of modernity is the “impossibility of educating individuals to completion” (ibid). Classical education involved inculcating in the student a mature conformity to the “finished world,” Since, however, in the modern age our world has “crumbled as a result of dynamization,” there is no longer a finished world to which the student may conform (ibid). Nietzsche, reacting against this situation, envisions an “aesthetic Weltanschauung” which will function as a program for human elevation in a post-classical age, emphasizing self-realization in the place of self-understanding. To make this radical change, however, Nietzsche first had to “transvalue” the texts and values of the old educational system. This task required a particular temperament, a “parodistic genius” which exulted in “explod[ing] all traditional genres of discoursing” (81).

In the chapter on Wittgenstein, Sloterdijk argues that the “luminescent enchantment” of his philosophy and the “standoffish nimbus of his life” are part of the “monastic” or “eremitic” element that Wittgenstein reintroduced into an “age of political philosophies and warring illusions,” a “totality of mediocre conditions” (87). This dissonance between an aloof, introspective philosopher and his civically-minded, bourgeois culture created a philosophical temperament colored by high tension and “decency under stress” (90).

Overall, Philosophical Temperaments is a highly engaging read, and the book as a whole accomplishes the author’s stated goal of revealing the diversity of philosophical temperaments. Even when Sloterdijk doesn’t offer a clear relationship between culture or material cause and temperament, in most chapters the temperament is so memorably and evocatively described that nothing is missed. For instance, Pascal is described as having a “penchant for miserabilism,” being “first among the philosophical secretaries of modern despair,” (34-5); Schopenhauer recognized the arational with “horror and amazement,” and in response preached renunciation, “calling it out against the roaring surf” of Will (64-5). And even the minority chapters which don’t cover temperaments at all (such as the chapters on Bruno and Marx) are worth reading for their insights into other aspects of their respective subjects. Readers interested in Marxism will find much of interest in the book. First, Sloterdijk’s chapter on Marx offers a fascinating discussion of the historical interpretation of Marx in particular and the nature of interpretation in general. Second, the book’s interest in the intimate relationship between cultural and material factors and individual philosophy and temperament is also central to the concerns of Marx and neo-Marxists. Marx emphasized that the potentialities of human nature are intertwined with, and enabled or restricted by, the particular configuration of the economic base and the social superstructure. Our choices, whether of philosophy or temperament or whatever, are free only to a limited degree and are reflective of our social situation. Sloterdijk’s concerns especially resemble those of the Hegelian Marxists (such as Lukács) and the critical theorists, who rejected historical determinism and instead emphasized the subject’s activity in Marx’s subject/object dialectic and a greater role for the cultural superstructure in determining human possibilities. Since this book assumes a fairly firm grasp of these figures’ philosophical opinions, it will probably be most rewarding for graduate students and scholars with a prior understanding of the history of philosophy.