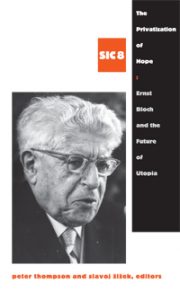 Slavoj Žižek and Peter Thompson (eds)
The Privatization of Hope: Ernst Bloch and the Future of Utopia

The German expressionist Ernst Ludwig Kirchner would perform a curious gesture whilst creating those works of utopia-laden nudes and ominous Berlin street scenes for which he has become renowned. As the curator for a recent exhibition of Kirchner’s works in Munich explained: ‘Kirchner’s enormous productivity is expressed not least in the fact that he did not paint his canvasses just on one side. Often he would remove one of his paintings from its stretcher, rotate it, and stretch it out again with the unpainted side facing up. The former recto of the painting thus became the verso.’ If there is a simple gesture encapsulating Ernst Bloch’s philosophy of hope, as far as it comes across through the essays in the present volume, Kirchner’s would be it.

Of the gesture Kirchner had little to say. When he did speak of it his comments were usually ironic, pointing to the gesture’s everydayness, its inanity, banality, conventionality or what have you: ‘a canvas has two sides, thank goodness.’ That the gesture may have saved the artist a few Papiermarks/Reichmarks (depending on the period) is beside the point, for the gesture expresses Kirchner’s sensitivity to what Ernst Bloch calls the not-yet which always overspills the frame of what is (222). At the same time as attesting to the non-fixity of the canvas, Kirchner’s gesture shows for us observers the always ‘embodied actuality’ (228) of the not-yet – Kirchner in a Berlin studio dismantling canvas stretchers whilst naked men and women dance around him in a bacchanalian revelry. Bloch is to philosophy what Kirchner is to paint, charcoal and canvas. Or, Bloch is revelation of the recto’s verso, ‘the poetic excess’ (213) constitutive of, but moving beyond, reality, ‘the redeemed world that hovers on the other side of bourgeois social existence’ (207), and thus is revelation of the incompleteness of what was incorrectly believed complete. For Bloch the S of the human being, of nature, of social existence, of the recto, is not yet P (64). The verso is always there. Indeed we can almost hear a Kirchnerian ‘thank goodness’ sounding out across the pages of Bloch’s pen, a pen dipped as it is in the wonder of the not-yet (84).

But does this not-yet exist for us today, have we not lost sight or sense of it? The near anonymity of Bloch (at least in the English speaking world) is not so mysterious if one considers the threadbare condition that hope endures today (170). Hope’s dereliction seems so thorough as to render hope for the Novum, the totally new, a strict impossibility. It seems as if our direction and destiny were stuck in the mirror house of capitalism (speculum); it seems as if we are powerless to look out (speculari) towards other horizons and to be able to collectively summon future forms (121). Despite a growing acknowledgement of the need for capitalism’s negation, any hope of its actual passing indeed appears hopelessly quixotic (166). It is what Bloch calls an educated hope that our current constellation demands most, but it is precisely this form of hope we seem incapable of learning: we are conditioned by capitalism to hope within the recto, within and through our own private desires; we are seemingly incapable of hoping within the verso (166). So the question of Bloch’s relevance thus shifts its axis: the question is not whether Bloch can be worthy of us, of whether and how he is relevant, but of whether we can become worthy of Bloch (xv).

However, like Bloch, contributions in this volume instil in the reader a sense that partisans are not obliged to consider contemporary states of affairs as perfected facts, as if facts amounted to the world’s completion. Instead we are guided by a transgressive thought to take up with renewed vigour Bloch’s insistence on the world’s being just as little finished as we are. This is not it ladies and gentlemen. Our splintered, privatised hopes, which are presented to us as tolerable ends of history, these hopeless hopes only heighten the sense of a need for the Novum, and hence a need for Bloch. For when we speak of this ‘irregular’ (23) philosopher and his heretical theoretical sojourns (84, 88), we speak of the idea that even in the darkest of times, even with hope almost completely enseeled within the wasteland of ego directed inwardness, there yet glimmers forth a passage to freedom (167). I cannot know for sure but I believe that that mad genius Kirchner, that Farbenmensch, working away frenetically in his Berlin studio, also experienced something of these ‘pre-illuminations of a better world.’ (84)

That, according to Bloch, there are possibilities of better worlds can be traced to his unique approach to the problem of materialism. Bloch kindles this materialism through a recuperation of Hegelian speculation guided by Marxian dialectic (138). Indeed it is Bloch’s special conception of matter as found in Das Materialismusproblem, Seine Geschichte und Substanz (1972), and as discussed in this volume, that is perhaps the basis upon which his militant hope thrives. Foreshadowing theorisations of the recent speculative turn (e.g., Meillassoux) by some seventy years (121) through his developing the Left-Aristotelianism of Avicenna and Averroes, Bloch conceives of matter itself as immanently and dialectically agentic (Agens-Immanenz) (128). In a somewhat similar sense to the context of Hegel’s diatribe against Spinoza, substance for Bloch thus becomes subject, and yet this is not to say that for Bloch this ‘subject’ loses any substantiality, as it were.

In harbouring such a radical conception of matter it does seem strange that the philosopher of the October Revolution would be largely unseen on the contemporary scene of Marxist thought in Britain. Ought this absence not to disturb us into thoughtfully meeting with Ernst Bloch? And yet as strange as it may be that during this, our crisis of negation, the philosopher of the greatest negation of the previous century has failed to be taken up for our own time, does this not simply attest to the ‘something’s missing’ that wefts its way through the Marxian theoretic itself – its not-yetness (84, 91); and does this not point to Bloch himself as an unfulfilled moment of the past (xv) waiting to emerge with that “reddening dawn” expressed so splendidly in The Principle of Hope (Bloch 1954-9)? Is Bloch himself not a verso? Have we only then to rotate the canvas? Any Marxist worthy of the name has to be heretical (5): Das Kapital ist ein Kapitel. What is needed to overcome the present state of things is not only cold economic analysis (86, 91), for such analysis can always fall prey to the economic reductionism governing capitalist society itself (1). No, what is needed to make an astute economic analysis heretical is precisely the movement of the warm stream of hope, for only then can Das Kapital potentially become a negated chapter of world history.

But if this volume foretells of a much needed coming future engagement with Bloch and the warm stream of hope, what is lamentable is that this foretelling comes with a strange price tag knotted to the front of it, or, more exactly, to the book’s first page: the French psychoanalytical theorist Jacques Lacan. Indeed, as part of Žižek’s SIC series at Duke University Press, The Privatization of Hope is plunged into a project the aim of which is to provide ‘a bundle of Lacanian interventions into a specific domain of ongoing theoretical, cultural, and ideological-political battles.’ The reader is told that the series ‘unabashedly’ avows ‘its exclusive Lacanian orientation’. This is all fair enough, but given that the fundamental theoretical conclusions of Lacan are at odds with those of Bloch, one cannot but wonder whether a Lacanian appropriation is being attempted here. That Bloch is a coming Kampfplatz is an interesting prospect, but ‘facile adaptations to other schools of thought’ (72) will ultimately leave the uniqueness of Bloch’s thought hidden from a time that needs it most.

Good then that a number of the volume’s contributors reject this attempt to reduce Bloch’s ontology of the not-yet to Žižek’s Lacan. If Bloch were to be received in this manner then one of his most fundamental moments (finality) would be rendered inedible excrescence (much like the absolute in Kantianism). Like Kant’s infamous proscriptions in the critique of pure reason (65), Lacan and Žižek similarly block the possibility of subject-object reaching that for which they strive: the non-‘preexisting telos’ (83, 89) of Heimat, identity, the communistic coincidence of subject-object. While the question of whether the lack can be transgressed is an idle one for Lacan, for Bloch redemption cannot be denied as a future possibility, principally because redemption is an objectively real possibility inhering within matter itself (122, 134). Hope for a better world has not yet had its hemlock, then.