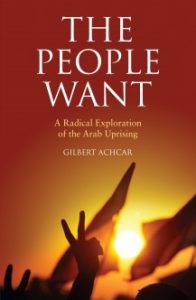 Gilbert Achcar
The People Want: A Radical Exploration of the Arab Uprising 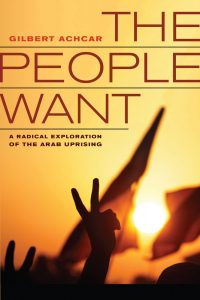 Gilbert Achcar
The People Want: A Radical Exploration of the Arab Uprising

Reviewed by Kevin B Anderson

Kevin B Anderson (kanderson@soc.ucsb.edu) is a Professor of Sociology, Political Science, and …

[Published in different editions in the UK and USA]

Up to now, we cannot agree even on how to name the explosion of popular movements in the Arab world from 2011-13 and beyond: Arab Spring, Arab revolution(s), Arab uprising(s)? Indeed, these events are too close to us, are too unfinished, and are too important in terms of their regional and global impact for any such consensus to have formed. What is clear is that these were political revolutions in some cases and that they swept across an entire region, from Morocco to Iraq. Their impact was also global, as seen in the Occupy movement, the Spanish indignados, Gezi Park, and elsewhere.

The Marxist scholar Gilbert Achcar settles upon the term “Arab uprising”: “The more neutral term ‘uprising’ has been used … because the term ‘revolution’ has more than one sense” (2). He sees these events as at most political rather than full social revolutions in certain countries, and above all as part of an ongoing process still unfinished at the time of his writing. (The book appeared in French in early 2013 and in English later that same year.) Achcar keeps “uprising” in the singular in order to emphasize the commonality of revolutionary experiences across the region.

Thus begins the most careful, insightful, and erudite study to date of the Arab uprising, written at a time when its fires were still burning strongly.

Achcar locates the Arab uprisings in their economic context in a two-fold manner. First, he analyzes the specific character of the economic conditions in the Middle East and North Africa (MENA) in the years leading up to 2011, comparing them to other developing regions like East Asia or Sub-Saharan Africa. He finds that while it did not stand out from the other regions in terms of absolute poverty or precariousness, the MENA region has in recent decades experienced catastrophically high levels of unemployment, especially youth unemployment. In addition, he singles out the region’s particularly high levels of female unemployment and underemployment. While the “Bonapartist nationalism” of the Kemalist regime in Turkey and that of Nasser in Egypt helped bring about significant economic development, this has waned in the period of neoliberalism.

If the above might be considered the “objective” side of economic relations in the region, in a second set of discussions, Achcar lays out the “subjective” economic context of the 2011 uprising in terms of class and labor relations. He analyzes carefully the specificities of the class struggle in several countries, particularly Tunisia and Egypt. In the former case, the trade unions were repressed and later co-opted by the state, but retained some autonomy, and more importantly, developed more left-wing currents within the rank-and-file. These currents not only supported the Gafsa miners’ strike of 2008, but also helped to create the conditions that allowed Mohamed Bouazizi’s self-immolation to become the spark for a nationwide mass movement that toppled the government in January 2011. (Since then, it could be noted, Tunisia’s trade unions played no small role in forcing the Islamist Ennahda Party to compromise with its more secular and leftist opponents, giving birth to a remarkably progressive constitution in early 2014.) In Egypt as well, the labor movement played an important part in both the prelude to the uprising (the 2008 strikes) and the 2011 uprising itself; but here, Achcar takes as his starting point the fact that Egypt’s unions were tied closely to the ruling political party, which meant that the workers’ movement has most often taken the form of wildcat strikes.

Achcar’s study also contains some remarkably subtle political dimensions. At an objective level, here in terms of state and power structures, he critically appropriates Max Weber’s concept of patrimonialism as part of his analysis of rentier capitalism, crony capitalism, and nepotism, whether within nationalist parties or monarchies. He also carries out a detailed analysis of tribalism, religious sectarianism, and ethnicity across a number of countries, both in terms of their general social composition and in terms of that of the hard core of the state, the military and security apparatus. He gives particular attention to Syria, “where the military-sectarian complex” within the armed forces “is such that they are willing,” unlike in Egypt, “to go against the majority of their country’s populace to defend the regime” (141). This does not mean that such a regime is impossible to overthrow, Achcar argues, but this cannot be carried out in such a context by a mass nonviolent movement alone; such a regime’s “hard core – its praetorian guard, above all – must be completely shattered by force of arms” (142).

At a second, subjective level, Achcar examines the variety of creative, oppositional forces that made the Arab uprising possible. Among these are not only the working classes, discussed above, but also various other social groups and tendencies. Here he focuses again on youth, not as before as victims of a moribund economic system, but as social actors who used new communication networks like Facebook. But in contrast to some other accounts, he emphasizes that many of the youth using social media in the protests were too poor to have their own devices and instead used Internet cafes. At a more general level, Achcar stresses the importance of “the workers’ movement, women’s movement, and youth movement,” in addition to “the role of satellite television and the Internet,” as “the ‘agencies’ of political and social change” (119).

The book draws repeatedly upon both the latest historical and social science studies and on core notions from Marxism, among them Lenin’s concept of the preconditions of revolution, Marx’s notions of the contradiction between forces and relations of production, and his concept of Bonapartism.

Finally, I would like to mention Achcar’s lucid critique of the crude forms of “anti-imperialism” that plague much of the global left. To the claims of some that the Qaddafi and Assad regimes represented some sort of defensible anti-imperialism, a stance endorsed by none other than the late Hugo Chavez even as the Libyan and Syrian peoples launched their mass popular uprisings against these leaders, he asks: “Of anti-imperialism and the right of the peoples, which value determines the other?” (197). He adds that if “one considers anti-imperialism as such to be the supreme value, one will unhesitatingly endorse the crushing of peoples who assert their right freely to choose their own future, if only imperialism opportunistically supports them, or if one considers the despotic regime oppressing them to be ‘anti-imperialist’” (198). These are hard questions for the left, and one hopes that Achcar’s reflections on these points will get the hearing they deserve, especially since he poses them not in terms of liberalism but of Marxism.

Overall, Achcar presents a sober yet hopeful view of the Arab revolutions. He points to their deep contradictions and limitations, while at the same time keeps referring to the uprising as part of a revolutionary process that will probably go on for years to come. He is probably right to do so.