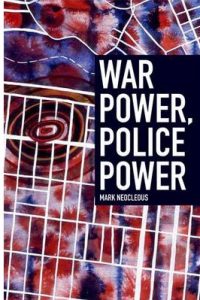 Margaux Portron is a PhD candidate in political philosophy at Paris 8 University and Queen Mary, …

Mark Neocleous’s book, War Power, Police Power, aims at deconstructing what he considers to be a false assumption: that times of war and times of peace have become harder to distinguish. This theory has been developed by Alain Badiou, Giorgio Agamben and Michael Hardt and Antonio Negri – thinkers of a Marxist tradition to which he belongs. Neocleous considers war and peace have always been hard to distinguish since military power and police power combine, for the purpose of civilisation, in an economic and political project.

The war on terror and its contemporary form of drone warfare are subjects being increasingly researched in disciplines as varied as law, philosophy, political science and geography. However since interest in this type of conflict emerged in the last five years in academia it has been mainly in articles while few books on the subject have been written. Neocleous’s War Power, Police Power is one of these books and it stands out because it does not belong to war theory but rather to the discipline of political economy.

As noted on the back cover, the author steps away from war studies and does impressive work in studying political, military and psychiatric discourses, which means that his book does not look at the military and police as institutions, but rather as discourse-producing, social ordering powers.

Neocleous starts by demonstrating how war studies fail to see the reality of war, for they consider as new the blurred line between peace and war. He maintains that pacification is in itself a form of war and that the process of civilisation cannot exist without violence because of the combination of military and police power in the pacification process. The combination of these powers takes the form of the suppression of revolts and public punishments, but also of actions which aim at taking control of economic powers and resources. Neocleous then proceeds to point out the logic of primitive accumulation (in its Marxist sense) which underlies the writing of international law, from Grotius in the sixteenth century to the Obama administration. He deconstructs international law as being the legal structure of colonisation.

Looking at discourses in media, politics and academia, the author demonstrates in the next chapter the role played by gender and the representation of gender in military discourse. He describes how the war on terror prompted a call for the return of “real men” willing to risk their lives to save people in the aftermath of 9/11 and also who were willing to sign up for wars in Afghanistan and Middle-Eastern countries to promote American freedom and Western values.

Neocleous continues by demonstrating how strategies such as bombing and no-fly zones are in fact police powers, for they serve mainly as tax-collecting and security measures, in spite of being named described as forms of pacification. For instance, he devotes an entire chapter to demonstrate that when Western countries decree a no-fly zone over a country, they strip it of its sovereignty by taking control of the air. This implies that no-fly zones are seen as being strategic because their first objective is to take total control of air power, essential for winning the war, as well as securing territory on the ground, by preventing the bombing and attack of cities or key posts by other air or land forces.

However, according to Neocleous, the transfer of sovereignty from one state to another belongs to an economic and political process which has everything to do with a contemporary form of colonisation. The establishment of a no-fly zone is only the first step in a lengthy process which seeks to reshape the transport networks, limit or minimise commercial exchange and eventually the entire state economy. Following this logic, drones are, according to the author only a sophisticated form of police power, serving no other purpose than primitive accumulation.

Finally, Neocleous highlights the lack of research on air power and demonstrates that existing studies have focused on the effects of drone warfare on the ground. In his final chapter he proceeds to show that the space to be policed is not tri-dimensional but rather layered, carefully locked down in a disciplinary fashion.

What Neocleous achieves is a commentary on war which has nothing to do with classical war studies. He does not look at the “traditional” military literature: Carl Von Clausewitz’s On War, or Sun Tzu’s Art of War. Rather he studies the theories of political economy which have served to justify, legitimise and even legalise war. Although it might seem like a classical approach, it is in fact a creative and original deconstruction of the justifications which has been made for war. Apart from Foucault, whom Neocleous acknowledges as the author closest to what he himself is intending to do, few writers have worked on police and discourse from this perspective.

Looking at conflicts, and particularly at colonising wars, from the perspective of political economy, shows the underlying logic of primitive accumulation in the development of liberalism; liberalism being understood both as an economic system and as the promotion of a definition of freedom by Western countries. Primitive accumulation, central in Marx’s Capital, cannot exist, recalls Neocleous, without violence, dispossession and a war on waste: non-productive individuals, empty spaces and unused resources. In order to justify this violence, countries have developed an extensive legal corpus which is now read as international law.

Neocleous has an extensive knowledge of the literature written at the time empires were expanding, and he connects this literature to the latest discourses on drone warfare. His work demonstrates the logic of primitive accumulation in the latest conflicts such as wars on terror, elsewhere justified as wars for freedom and formerly called wars for civilisation.

Throughout his book, Neocleous distances himself from war studies and studies the discourses produced by military and police powers. He focuses on the genealogy of words to show the consequences of the process of civilisation on language. For example, a word such as ‘feudalism’, Neocleous states, was founded on the term ‘feud’. Thus a word which belongs to the vocabulary of economics has its roots in the vocabulary of conflict.

This genealogy of the discourse of civilisation and pacification highlights the difficulty of distinguishing between conflict and peace. The difficulty of separating times of war from times of peace coincides with the difficulty of separating spaces of war from spaces of peace. Military power and police power combine not only in zones of conflict but also impact on the national territory. By getting away from “classical” war studies, Neocleous shows how they miss the point about conflict being a part of the social contract. Violence is part of the process of civilisation, not only in the ‘enemy’ space, but also on the national territory via the work of police as social ordering, and via social ordering serving economic purposes.

The integration of the national space – the space in peace – in international conflict is what makes Neocleous’s work unique. In this respect, he achieves the stated purpose of his book by looking beyond the military and the police as institutions; he shows that when combined for the purpose of social ordering, military and police are powers exerted not only in battlefields but also ‘at home’. The military and the police are legitimised and legalised by scientific and political discourses.

War Power, Police Power is an ambitious work. One is genuinely surprised by the variety and depth of the subjects covered, including gender issues, air power, economy and security. This diversity of subjects is at times overwhelming and one wishes Neocleous would spend more time on subjects which have not been covered in previous books such as his understanding of post-traumatic stress disorder (PTSD). He takes a subversive standpoint on this by arguing it has been developed more as a political discourse than a psychiatric one. PTSD highlights how soldiers suffer heavy psychological consequences after fighting in the context of war. However Neocleous states that it serves to transform executioners into victims in the eyes of the public. Such an unusual view excites the reader’s curiosity and deserves longer treatment.

All the sections of the book convincingly serve the argument that the war on terror is now police work, and that police work serves mainly primitive accumulation and economic purposes – carrying on the logic of colonialist war in the form of civilisation. Where his book is so creative is that it takes different routes, looking at various discourses, to lead us to this conclusion.