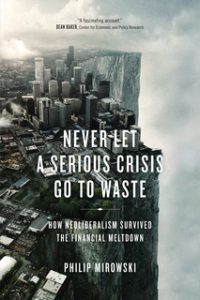 Mirowski has produced a profound and important book which deserves to be read, however his prose may be distracting for some readers. He also avoids discussion of my two favourite writers on political economy, Marx and Ostrom. I nearly gave up reading it on several occasions, mainly because of the frankly odd writing style. His book discusses why the financial crisis of 2008-9 has strengthened mainstream economics, rather than made it possible to challenge it.

Mirowski first outlines how a range of commentators proclaimed that the neo-classical economics that was so dominant in the early years of this century had been damaged, perhaps fatally, by the financial crisis. He explains carefully why it has instead survived, and is perhaps even stronger. In many parts of the world, the UK being a good example, initial caution about deregulation was soon replaced with an enthusiasm for extending neo-liberalism even further. In the UK, and to some extent in the European Union, greater austerity as a response to debt has seen the extension of market relations to new areas of society, rather than a challenge to deregulation. While it was widely agreed that global economic imbalances, growing inequality and financial deregulation contributed to the crisis, such agreement was forgotten swiftly and neo-liberal policies have been continued with greater enthusiasm.

Mirowski argues from popular culture to economic theory, advocates of neo-liberal economics have reacted swiftly and effectively against any challenge to their ideas. He notes the existence of a ‘full spectrum’ defence of neo-liberalism, which includes responses from mainstream academic economists, ideological neo-liberals and purveyors of popular culture.

Mainstream economics is so conservative that cognitive dissonance seems the order of the day. In the same way that fish are unaware of the water they swim, economists seem unaware of the discipline within which they move. Economics as an academic discipline is famously closed and despite demands for an economic alternative heterodox currents have virtually no space within academic departments. Mirowski argues that challenges from neuro and behaviourial economics are used to protect the discipline from fundamental change rather than to extend understanding.

One element of heterodox economics is the Austrian economics of von Mies and Hayek, yet this, has, and Mirowski produces much evidence to back up his thesis, been used to deepen rather than challenge market based assumptions. Austrian economists like Hayek, while criticising elements of mainstream economics, especially around knowledge, have used such criticism to enhance a market based logic, instead of challenging it. Mirowski suggests the existence of a neo-liberal thought collective that evolved from the Mount Pelerin Society and still shapes policy-making to an extraordinary degree.

Finally neo-liberal economics is defended ideologically as a common sense we can all buy in to. Popular culture, from TV shows to tabloids, demonises those who are poor and excluded and promotes a society based on `Dragons Den’, entrepreneurial self-striving. We are all in a competitive race with each other. A market logic extends ever further through society, if some are rich and others poor, this is because only a few of us can win the race. Economics shapes society so that society identifies with a market based logic.

This is only the barest outline of what Mirowski discusses along with his suggestion that we need a full spectrum response to market based mainstream economics, stretching from popular culture to academic work. However there are gaps in his account and weaknesses in his presentation. Mirowski’s avoidance of any serious discussion of how Marx or other Marxist thinker’s such as Althusser, might help us understand the role of ideology in maintaining the influence of a particular social class was a failing for me. The potential contribution of Marx to understanding economic crisis, which I feel is as fresh and relevant today as in the nineteenth century, is another gap. Marx and Marxism are ignored other than passing remarks such as the supposed incompatibility of Foucault’s perspectives with Marx (99-100). There are a range of more recent challenges to the foundations of mainstream economics. I have long been fascinated by Elinor Ostrom’s attempt to think through economics beyond purely private property relations, the state, the commodity and notions of ‘rational economic man ‘ [sic]. Mirowski completely ignores the existence of her work.

Presentation seems, though, most problematic. The prose is so rich and odd, it almost made me dizzy. Ideas, including economic ideas, are transmitted and such transmission, the subject of Mirowski’s book, is a product of culture. Economists, of course, are not well known for the clarity, persuasiveness or beauty of their words. Mirowski combines obscure phrases with colloquialisms, colloquialisms which are variously clichéd or in themselves bizarrely obscure.

Open the book at random and you find statements such as:

Returning once more to our insistence on the importance of agnotology, it takes some diligence and not a little digging to come to understand why the populace was being lured up the garden path; those seeking enlightenment were lured to waste their time in dalliance with ideas that did little more than divert attention from deeper structural causes of the crisis. (256)

Few of us write well consistently, and yes ‘agnotology’ is explained earlier in the text, and yes ‘diligence’ sounds pleasant with ‘digging’ but ‘enlightenment’ and ‘garden path’ do not work well.

There is very much important detail here, for example, the use of doubt to prevent action on climate change is a fascinating aside. So ultimately Mirowski’s book is important, however Richard Seymour’s recent Against Austerity (2014), which is clearly influenced by Mirowski, is an easier read which picks up on many of the important points. Unlike Mirowski, Seymour examines the continuing success of neo-liberal ideology with reference to Marx, Gramsci, Althusser and a range of illuminating thinkers. Mirowski calls for a full spectrum approach to combating neo-liberalism, from high theory to cultural interventions, but largely fails to specify sources of inspiration for such interventions. Mirowski asks a vital question and provides some answers, but additional work is needed to provide a convincing alternative to neo-liberal economics and to develop strategies for advancing such alternatives.The test of a text, according to Spinoza, is its effects. In my opinion Mirowski diminishes the likely positive effects of his book with his prose.