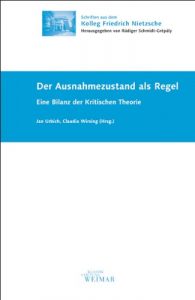 Adrian Wilding is currently a visiting scholar at the Institut für Philosophie, …

This book collects a series of lectures given in Weimar in 2012-13 by major figures of the contemporary Frankfurt School (among them Axel Honneth, Oskar Negt, Albrecht Wellmer, Christoph Menke and Alfred Schmidt) and key names in Frankfurt School scholarship (including Martin Jay, Rolf Wiggershaus, Peter Bürger and Sigrid Weigel). Taking as its theme a concept of Walter Benjamin’s recently revived by Giorgio Agamben – The State of Exception as Rule – the lecture series sought to show the enduring topicality and relevance of Frankfurt School ideas. A provocative backdrop to the debates was Axel Honneth‘s (2007, 45) claim that “the basic historical-philosophical and sociological assumptions of the Frankfurt school can no longer be defended.” Each of the contributors to the Weimar lectures (including Honneth himself, who here tempers his earlier claim) were in different ways arguing against this thesis.

The volume opens with Martin Jay’s essay “After the Eclipse: The Light of Reason in Late Critical Theory” which charts a history of the concept of reason from the early work of Horkheimer, Marcuse and Adorno up to the theories of Jürgen Habermas where it is “restored but chastened”. Questioning the early Frankfurt School’s tendency to equate reason with self-preservation, Jay comes out in qualified support of Habermas’s communicative, interactive alternative. He endorses Habermas’s turn to the analytic philosophy of Sellars and Brandom, for whom reason is no monological or monolithic faculty but arises in the everyday giving of “reasons”: “the temporal centre of gravity of giving reasons is a future potential consensus rather than a recovery of a past foundation or ground” (46). There is, however, as Jay notes, an equivocation in Habermas’s thought (in fact a change in opinion over his lifetime) about whether such consensus can ever be “practically realized in real-life discussion” or “remains doomed to be eternally regulative” (47). This last issue is actually very important for any thorough assessment of Habermas’s work and could have received more extensive discussion.

More critical of Habermas is a joint article by Peter and Christa Bürger. Peter Bürger defends Adorno against criticisms made in Habermas’s Theory of Communicative Action, noting his “disappointment” when the book was first published (58). Habermas’s “system” versus “lifeworld” distinction seemed “blurry” and to have sacrificed much that was incisive in Lukács’s earlier notion of reification. That Adorno’s philosophy is often merely “gestural” is a claim of Habermas that Bürger emphatically rejects, and he sets out via an analysis of Adorno’s idea of “mimesis” to show its value as a critical concept. In a parallel piece, Christa Bürger traces the ethical implications of mimesis via readings of Ingeborg Bachmann, Colette Peignot and Goethe’s Faust.

Some recent commentators on Adorno, seemingly unhappy with his negative dialectic, have argued that it must rest on implicit positive principles, whether ethical or anthropological. Martin Seel’s essay “Traces of an Eudaimonic Ethics in Critical Theory“ contributes to this – it must be said – rather extraneous approach, arguing that the Frankfurt School’s longstanding scepticism towards the Aristotelian notion of a “good life” (eudaimonia) hides essentially eudaimonistic presuppositions. Particularly Adorno’s high regard for Proust rests, so Seel argues, on the positive (even if only momentary) experiences of a fulfilled life (gelungenes Leben) described in his writing. Seel admits that any such notion in Adorno is hidden behind a Bilderverbot, the unspoken obverse of a more thoroughly catalogued “wrong life”, but argues that Adorno deceives himself if he believes that “freedom and happiness, morality and justice, above all the individual and social good under present conditions can only be determined negatively.” (151) Critical theory, Seel goes on to suggest, is missing an opportunity to learn from the more sophisticated versions of eudaimonistic philosophy developed in recent years.

One of Adorno’s former students, Alfred Schmidt, provides a subtle reading of his teacher’s “materialism”, from the early work on Husserl through to Aesthetic Theory, concluding with a reappraisal of the “Meditations on Metaphysics” which close Negative Dialectics. Schmidt argues that these meditations are in no way outworn in our supposedly “postmetaphysical” times, defending Adorno’s insistence that the somatic is ineluctably linked to metaphysical interests and needs. Schmidt’s encyclopaedic knowledge of the history of philosophy is on display in this engaging piece. The essay’s final pages, which explore the meaning of mortality, take on new poignancy when we realise this was one of the last things Schmidt wrote before his death in 2012.

If these contributions seem predominantly philosophical, others are more directly political. Taking its cue from the slogan “Another world is possible”, Albrecht Wellmer’s “On the Critique of Critical Theory” puts Frankfurt School thinkers in dialogue with such writers as Rancière, Balibar, Negri and Žižek. Wellmer’s piece is a breath of fresh air in its readiness to question Habermasian and Honnethian orthodoxy. He is surely right to doubt whether the Habermasian public sphere alone can repel the “colonisation of the lifeworld” by economic and administrative “subsystems” and correct to say that Honneth has overestimated the moral foundations of market exchange. And though he finds no convincing political solutions in the theories of Negri or Žižek (they are caught on the horns of an anarchist versus Leninist organisational dilemma), Wellmer does endorse Hardt and Negri’s dual politics of “rebellion” and “constitution”. That this is to further a “domestication of the capitalist economy” and a “regulation of finance markets” (198) is a rather disappointing conclusion (something of the narrowed horizon of recent critical theory is visible here) but Wellmer’s political focus is certainly commendable.

Christoph Menke’s essay deals with Marxism and law. For Menke any “critical theory of law (Recht)” must acknowledge an irresolvable contradiction in law between “normativity” (establishing an order of equal rights and justice) and “domination” (law’s practical effect as compulsion and State violence). Menke expounds what he calls Marx’s “social logic” of law, whereby “legal equality simultaneously hides and enables social oppression” (103) before criticising this logic for aligning law with domination in an ahistorical and functionalist way, giving law the very appearance of eternal validity Marx wished to deny. A critical theory of law, Menke argues, must also examine its “political logic”, namely how laws originate historically as outcomes of particular struggles. Taking both logics into account can avoid two errors: “apologetics – the cheerful work of critique towards ever-improving laws” and “cynicism – the mournful consciousness that all critique is compromised” (110). Though interesting, Menke’s piece would have benefited from discussing Chapter 10 of Capital Vol.1 where Marx develops just such a “political logic” in analysing struggles over legislation on the working day.

In his “Challenges of Freedom: The Actuality of Critical Theory”, Axel Honneth draws upon his recent work Freedom’s Right (reviewed here 2012). Reconsidering his earlier view that the basic tenets of the earlier Frankfurt School are “no longer to be defended” he now suggests that, at least in terms of their understanding of freedom, critical theorists have always offered “the better and more persuasive alternative” (159). What unites Frankfurt School theorists across the generations is that each has adopted a concept of “social freedom” which “derives from Hegel and is extended by Marx” (160). What does Honneth mean by this? Briefly put, social freedom implies that another person is no obstacle to, but rather the precondition of, my liberty. When we mutually recognise each other’s freedom we mutually enable one another, expand each other’s capacities. Through being recognised at a social level, freedom becomes institutionally anchored and historically actual, in contrast to the negative freedom of liberal theory or the positive freedom of communitarianism. As I have argued elsewhere (Gunn and Wilding 2013), this theory has strengths but also considerable weaknesses, particularly in underestimating the alienating character of institutions and in diluting the original revolutionary meaning of Hegelian “mutual recognition” – but Honneth certainly ends his Weimar lecture on an intriguing note: one key legacy of critical theory is its “large dose of mistrust towards all currently prevalent promises of freedom” (171), a line of thought whose implications may be more radical than the author intended.

It is Oskar Negt’s contribution that most clearly recalls the radical political spirit of first generation critical theory. His “The Halved Person: Democracy as Life-Form” is a powerful, wide-ranging critique of contemporary society – the amassing of extreme wealth alongside extreme poverty, the growing chasm between centre and periphery, the ideology of “flexibility”, the reality of precarious labour: “fragmentary jobs, from which no one can live properly anymore, short-term contracts in universities or other fields which generate a fragmentary life-perspective and contribute, for example, to the fact that planning a family is no longer easy” (141). With great acuity Negt pinpoints sites of present injustice and unfreedom, underlining that these are no mere “misdevelopments” (Fehlentwicklungen), as Honneth would put it, but inherent features of “the new form of capitalism” (143).

The remaining articles can be more briefly summarised. Rolf Wiggershaus sets out “Elements of a Critical Theory of Nature” which, with the help of concepts drawn from Horkheimer and Adorno, refocus attention on our ecological crisis. Sigrid Weigel argues for the renewed relevance of Hannah Arendt and Walter Benjamin in the wake of postmodernism. Finally, Wolfgang Kraushaar examines how the 1960s German student movement and extra-parliamentary opposition used Walter Benjamin’s call for a “real state of emergency” to counter emergency laws and the criminalisation of protest. Here, surprisingly, we find one of the few moments of engagement with the title of the lecture series.

The volume’s subtitle, on the other hand, speaks of “taking stock” (eine Bilanz) of critical theory. In what sense is this achieved here? Certainly, the above summary indicates something of the lasting topicality of the ideas of Adorno, Horkheimer and other early figures of critical theory. Can one unequivocally recommend the work being done today under the heading of critical theory? This is harder to answer in the positive. The conceptual and political radicality of the Frankfurt School’s first generation, their refusal to succumb to hidebound ways of academic thinking, is matched only rarely here: in Oskar Negt’s barnstorming lecture, for instance. In other contributions it often appears – frustratingly – only at the margins. In this context the editors have helpfully appended the Institut für Sozialforschung’s original “mission statement”, which speaks of a “duty to pursue non-conformist thinking” (241). How far this principle has been adhered to by later generations only the reader can decide. Nevertheless this book is an important retrospective, one which also gives a vital snapshot of left-wing theory in Germany today. One hopes that it will soon be translated and reach a wider audience.