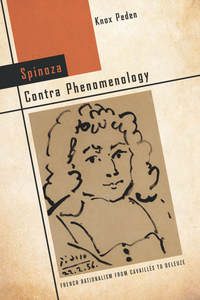 Though it is tempting to do so, it would be incorrect to label Knox Peden’s Spinoza Contra Phenomenology as a history. The book’s subject, the tradition of twentieth century French Spinozism, is famously antagonistic to the conflation of reason and history that it sees as endemic in post-Hegelian philosophy. Spinoza himself counseled his readers to see things “under the aspect of eternity” (13). A purely historical account of Spinozist thought, then, would run the risk of diverging too greatly from its object; of examining it from a position external to its own methods and concerns. Peden is well aware of this. His command of and sensitivity to Spinoza and his descendants is too strong for this not to be the case. At best, for these thinkers, the historical realization of concepts and ideas, their “discovery,” is external to their value. When asked by his doctoral committee why he had not covered the history of philosophical speculation on mathematics in his thesis on set theory, Jean Cavaillès, one of the books primary figures, “claimed that his work was concerned solely with set theory itself, not with its influence on the conceptions of philosophers” (35). At worst, reason and history are seen as opposed: reason the hero, and history the villain. Discussing Cavaillès’ political activities in the French Resistance during World War II, Peden paraphrases Georges Canguilhem saying, “If ‘History’ might explain the advent of Nazism, just as it accounts for Napoleon’s arrival in Jena, then what explains Cavaillès is the force of reason against history” (22).

Nonetheless, the book does have a diachronic scope; it is concerned with the movement of thought from Jean Cavaillès to Gilles Deleuze. Though history is secondary to reason for the thinkers in question, reason is understood as dynamic, and consequently its unfolding is of primary importance to them. Peden writes;

A key terminological distinction for Cavaillès, was that between histoire and devenir. Histoire was the realm of the contingent, the world as experienced, in short, the lived. Cavaillès did not deny that mathematics had an histoire; more important, however, was the need to uncover the devenir, the becoming or evolution, that subtended that history and that possessed a rational integrity independent of historical contingency (42).

While this unfolding may be accessible in purely theoretical terms, the conceptual diaspora of a tradition is also revelatory of its processes, tensions, and mutations. Peden purposefully utilizes a capacious definition of Spinozism for just this reason, covering “thinkers for whom aspects of Spinoza’s thought played an instrumental role in their own projects,” rather than only specialists (7). By doing so, he is able to unpack the myriad resources latent in Spinoza’s thought and trace its otherwise obscure fault lines. Thus, even the more historical material in the book is only included insofar as it is revelatory of something conceptual.

Additionally, calling Spinoza Contra Phenomenology a history neglects the sense in which the “contra” of the title denotes a relationship. Though this relationship is localized in a time (the twentieth century) and a place (France), Peden’s principle focus, again, is theoretical. His concern is with how the two discourses developed out of a tension that preceded each individual term, at least logically. This is also why it would be much too simple to say that Peden sides with the Spinozists. He does to the extent that his book is an attempt to redress an imbalance in historical and philosophical scholarship, one that portrays twentieth century French philosophy as irrational and antirational and which identifies phenomenology as the source of these tendencies. One of his aims is to replace this understanding with one that gives sufficient weight to the influence of rationalism, in this case Spinozist rationalism, on the philosophical discourse of that era. But only roughly half the book concerns die-hard Spinozists (Martial Gueroult, Jean Cavaillès, Louis Althusser), while the other half concerns a critic of Spinozist rationalism (Ferdinand Alquié), a thinker torn until the end of his career between the two positions (Jean-Toussaint Desanti), and a thinker who attempted to synthesize them (Gilles Deleuze). Disrupting this dichotomy further, Peden shows us that rationalism itself is a disputed territory. He begins the book by outlining the German reception of Spinoza and the widespread fear, maybe best exemplified by Kant, that Spinozism entails an overextension of reason and moral destitution.

He goes on, after addressing Cavaillès, to delineate the debate between Gueroult and Alquié regarding Descartes and Spinoza. According to Peden, the rationalist critique of phenomenology that Cavaillès inaugurated was “codified and effectively institutionalized as a stand-off between Cartesianism and Spinozism in French thought,” with Alquié representing the former and Gueroult the latter (65). In line with their respective philosophical commitments, Gueroult “sought to eliminate from philosophy the insights of first-person experience in favor of a proliferation of structurally interconnected concepts indifferent to their source,” while Alquié argued that the core of philosophy is represented by “the ontological experience dramatized in the Meditations: man’s ability to move beyond the world of objects gaining closer proximity, not to say convergence, with Being itself” (66, 74). What their historically grounded debate demonstrates is that the tension which drove 20th century French philosophy is, if not perennial, at least recurring. This expands its importance from a limited historical purview to that of a general problematic.

If Peden does favor Spinozism, in the end, it is only because, in his view, it is better equipped to address this problematic. For him, it would seem Spinozism is a methodological position. Peden’s summary of Cavaillès’ project could serve as a summation of the tradition as a whole when he writes: “the Spinozist rationalism Cavaillès seeks to develop is, if not quite an organon, a primarily dispositional and methodological ‘philosophy’ (62). This type of rationalism is necessitated by the Spinozist metaphysics and epistemology that unites the book’s figures (7, 8). Because all determinate beings are uncreated, insofar as they are modes of a single eternal substance, which is itself split permanently between the incommensurable yet identical attributes of Thought and Extension, knowledge of them does not consist in understanding their origin or their purpose. They are not bound by their cause in either sense. Peden writes, “the qualitative changes that occur on a modal level can never be completely reduced to their ground in the attributes; modal change occurs through relations among modes” (85). Understanding thus consists in grasping the relational networks in which the modes co-determine one another and the constitutive disjunction between Thought and Extension that serves as their “formal and substantial condition” (85).

Althusser offers an “applied” example of this sort of thinking. Taking the chasm between Thought and Extension to its limit, he characterizes philosophy (and politics) as dealing with “an insubstantial object, a non-object, a pure happening as such, the moments of convergent `effects’” (175). He would eventually conclude that Spinoza’s substance is “a literally insubstantial category and thus a ‘void’” (132). The consequent methodological task of philosophy is to understand determinate beings as accumulations of effects without making recourse to substantial unity or external causes to explain these effects. Beings are purely relational in this framework, and therefore must be approached in terms of their interconnections, frictions, and discontinuities. Peden’s positive appraisals of Desanti’s late-career move to “ascetic” epistemology, and what he sees as Althusser’s unrelenting commitment to Spinozist formalism’s humble goals, seem to indicate how he would situate his own methodological work. Yet, it is unclear if this humility is fitting. As Peden notes when discussing Cavaillès, Spinozist formalism is not restrictive, unlike its Kantian counterpart, which “attempts to legislate the contents of science in advance through a recourse to formal restrictions” (62). For Cavaillès and the tradition that follows him, “forms are never restrictive; they are essentially enabling” (62). If this is true, then the methodological work Peden is doing is productive and creative, and Spinozist philosophy’s abandonment of an adjudicating posture does not commit it to passivity. It would also suggest that the possible social and political impact of Spinozist rationalism is, perhaps, greater than Peden explicitly argues it is.

His general contention with respect to politics is that Spinozist rationalism is an effective tool to critique phenomenology and its associated political projects but is not capable of generating a politics of its own (14). This is because, according to Peden, Spinoza’s rationalism “can be used to undermine the pretensions of any mode of political thought that seeks a metaphysical foundation—even if that metaphysics is Spinoza’s” (15). His immanentism opposes itself especially to revolutionary politics, insofar as they tend to entail an external goal to work towards and an external principle to justify themselves by. Further, his resistance to classical causal accounts frustrates attempts at political diagnostics, which are often seen as essential to revolutionary enterprises. Put more plainly, the Spinozist metaphysics presented by Peden gives us a reality without a past (in the form of an origin) and with an uncertain future. Such a reality is not amenable to theories of political change because it is, by definition, unpredictable. Ultimately, we are returned to Cavaillès’ example: “Whereas others invoked partisan imperatives, be they communist, social, or democratic, to justify their Resistance activity or pointed instead to a general notion of national honor, for Cavaillès the Resistance was simply a question of necessity: ‘I’m a Spinozist,’ he said; ‘we must resist, fight, and confront death. Truth and reason demand it” (19). Correct action, like correct thought, requires no justification beyond itself for the Cavaillèan Spinozist. Armed only with tenacious but humble reason, what must be done is done.