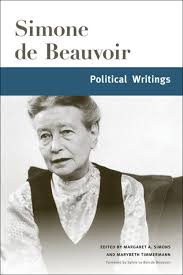 Simone de Beauvoir is best known as the author of The Second Sex, considered by many to be the manifesto of modern feminism, and as the life-partner of arguably the most controversial philosopher of the previous century, Jean-Paul Sartre. That apart, she was also a novelist, a playwright, a literary critic, and, though she refused to make a claim to the same, a philosopher. Political Writings is a carefully selected and newly translated compilation of some of Beauvoir’s essays that reflect the eclectic nature of the writer’s thoughts, the depth of her analysis and the sheer literary and aesthetic force of her language.

The essays cover a three decade period, from the mid 1940s to the mid 1970s, and are presented in the book along with introductions by experts in Beauvoir studies. Not only are the introductions a pleasure in themselves to read, they also provide the politico-historical context in which the essays were written, allowing the reader to appreciate them all the more.

Reconciling Marxism with existentialist humanism was a lifelong project for both Sartre and Beauvoir. Both attempted to free Marxism from the determinist thinking that dominated the political discourse of several leading left-wing French intellectuals of that time. In Political Writings, Beauvoir’s political philosophy emerges as a vigorous defence of a humanistic Marxism, one that places man at the centre of its enquiry. Her reports from America, Portugal and Spain in the mid 40s, her preface to Djamila Boupacha (1962), a book which she jointly authored with Gisele Halimi about an Algerian militant who was captured and tortured by colonial France, her account of a factory fire in Paris that killed dozens of workers, all show her deep empathetic concern for the oppressed both as a social category and also as individual subjects.

All the same, Beauvoir does not slip into an abstract celebration of subjectivity, which, she alleges is the hallmark of reactionary thinking. In her essay on “Right-Wing Thought Today” she argues that to the anti-communist ‘A man’s material reality and situation count for nothing; only his subjective reactions matter.’ (122) Beauvoir’s Marxism on the other hand locates man within a situation, considering him as a sum total of the possibilities that are given to him in that situation. Neither predetermination nor non-determination can provide sound solutions.

Thus, she takes on historians like Oswald Spengler and Arnold Toynbee for their pessimism and for their beliefs about the insignificance of the common man in creating history, and also philosophers like Raymond Aron, Vilfredo Pareto and Max Scheler for their esoteric approaches to social reality, critiquing how bourgeois ideology depends on grand words like ‘pluralism’, ‘merit’ or ‘chance’ to sustain itself. She condemns with vehemence the right-wing thought that ‘man is an evil and stupid animal.’ (132)

Ironically, this is precisely the view of man that informed the thinking of Marquis de Sade, whom she defends in an earlier essay. In “Must We Burn Sade?” Beauvoir argues that Sade was neither a consummate artist nor a coherent philosopher but a great moralist. (75) According to her, Sade attacked the liberal idea of ‘the harmonious reconciliation of individual interests with the general interest’ (77) and denounced ‘bourgeois mystification which consists of establishing class interests as universal interests.’ (81) While that might indeed be the case, Sade was an incorrigible misanthrope. While his penetrating insights into the dark recesses of the human mind and the driving force that the sexual instinct plays in both private and public life were unprecedented for his time, Sade had a habit of taking as examples the worst of the human lot and passing it off as the norm. Beauvoir is right to note that in his time, Sade tried to live an authentic life, without hypocrisy; but that life was lived with contempt for everything human and everything humane. It is one of the paradoxes of history that some of the greatest thinkers found their inspirations in their ideological antipodes. Friedrich Engels for instance was inspired by Honoré de Balzac, an arch-royalist. The humanist Beauvoir, who was horrified by the existence of torture, was inspired by the man who gave his name to sadism.

Beauvoir’s essays on Israel provide a sober and ethical approach to a contentious issue. As the recipient of the Jerusalem Prize in 1975, at a time when several left-wing French intellectuals were vociferously condemning Israel, Beauvoir argued that her acceptance of this award was a symbolic act because there existed in political discourse ‘a deliberate will to symbolically do away with Israel, and a symbolic elimination is very dangerous because it implies a profound desire, conscious or subconscious, for real annihilation.’ (314) While being sympathetic to the plight of the Palestinians and their demand for statehood, Beauvoir, taking into account the historical persecution of the Jews, believes that Israel too has a right to exist and that any solution, to be valid, must recognize the state of Israel. (316)

Contemporary debates on Israel are often so polarized – with right-wingers in the West dubbing the whole Palestinian movement as terroristic while the left-wingers make rather exaggerated allegations against Israel –that both obscure the truth and frustrate attempts for a solution that can guarantee peace and co-existence. The disproportionate media coverage and condemnation of Israel’s war crimes, at times when similar or worse crimes happen in other parts of the world, does contribute to a Jewish sense of insecurity. For instance, when the 2014 Israel-Gaza conflict was going on, thousands of left-wing activists took to the streets across the world condemning Israel, and, in some cases, even supporting the Islamist Hamas. About the same time, the Islamic State massacred hundreds of Yezidi Kurds in Northern Iraq and captured over a thousand Yezidi women as sex-slaves. These incidents, however, did not provoke the same outrage as Israel did. Apprehensive of trends in the left that selectively targeted Israel, Beauvoir astutely notes how this only contributes to the militarization of that state as ‘fear and isolation lead to a rigid attitude of refusing any measure that is not immediately a security measure.’ (317) Her perspicacious writings on the subject are a must read for Israelis and Palestinians and their respective supporters today.

The one piece that stands out quite odd in the selection is the transcript of Marianne Ahrne’s documentary film A Walk Through the Land of Old Age (1974). While Beauvoir is the central subject of the film, and provides rather interesting views on old age and her anxiety regarding the same, there is very little in it that is politically significant, even though it makes for a good read.

The essay on “Merleau-Ponty and Pseudo-Sartreanism” is politically significant and is also of a deeply personal nature. Maurice Merleau-Ponty, Beauvoir and Sartre were friends and worked together on the editorial board of the journal Les Temps Modernes for several years. However, while Merleau-Ponty resigned at the time of the Korean War, Sartre and Beauvoir became increasingly enamoured with communism. Soon after, Merleau-Ponty wrote a sharp criticism of Sartre’s leftist politics in Adventures of the Dialectic (1955). Beauvoir’s essay here is a rejoinder to that. In her rigorous, at times brutal, criticism of Merleau-Ponty, Beauvoir demonstrates her fidelity to the Sartrean idea of Marxism. Accusing her former friend of wantonly misinterpreting Sartre so as to caricature him as a defender of a mechanistic Marxism, Beauvoir argues that on the contrary, Sartre was trying to save Marxism from the mechanistic thinking that dominated the mainstream left intelligentsia. While for Sartre ‘everything comes not from freedom but from the situation’ (231) his humanistic thinking conceived of a communism that ‘expresses the will of certain men who, first of all, demand to hold their lives in their own hands instead of enduring the fate imposed on them by elites.’ (249)

These Sartrean ideas would later greatly influence the militant political writings of Frantz Fanon, most notably in The Wretched of the Earth. Beauvoir’s essay also has great contemporary significance at a time when the Western left is mostly weak and fractured and the right-wing is in the ascendancy. New alternative political movements like the Podemos in Spain can learn much about organization, leadership and the relation of the party to the people by reading Beauvoir’s assessment of these matters.

The essay also reveals the deep love and commitment Beauvoir had towards Sartre as an individual. Those were also values that Beauvoir believed the ideal revolutionary must possess towards his or her objective.