Marx & Philosophy Review of BooksReviews‘Utopia as Method: The Imaginary Reconstitution of Society’ reviewed by Nina Rismal 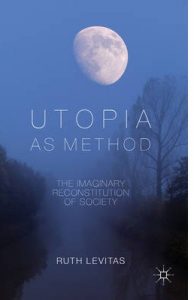 Ruth Levitas
Utopia as Method: The Imaginary Reconstitution of Society

Nina Rismal is a graduate student at the Department of German and Dutch, University of Cambridge. …

In her new book, Utopia as Method: The Imaginary Reconstitution of Society, Levitas makes an advance on the contribution she made with The Concept of Utopia, which was above all concerned with systematically tracing the transformations that socially and politically engaged utopian thought had undergone since the 19th century utopian socialism and Marx and Engels’ allegedly anti-utopian socialism. Whereas intellectual history of the utopian current remains a strong underlying component of Utopia as Method, Levitas’s objective this time round is more ambitious. She not only attempts to rescue utopian thinking – a mode of thinking which in her view is best captured in the phrase ‘The Imaginary Reconstitution of Society’– from the bad press which it has had from both sides of the political spectrum over the past century; she also aims to bring utopia to the very forefront of the contemporary social science. Levitas argues that ‘[s]ociology must reclaim utopia’ as the principal method of its inquiries into the social world. Levitas is inspired by the work of H. G. Wells. In fact she presents her argument as an elaboration of his 1906 lecture “The So-Called Science Called Sociology” in which he claimed that ‘the creation of Utopias – and their exhaustive criticism – is the proper and distinctive method of sociology’.

The book, which is written in a clear and cogent academic style, has a tripartite structure. Part I reprises the message of The Concept of Utopia: namely, Ernst Bloch’s idea that utopia is best understood as an anthropological constant, as an expression of desire for a better future that is inherent in human culture. Part II traces the historical associations between utopia and sociology, from Comte’s “invention” of sociology as a distinct discipline yet one that closely overlapped with the utopian thought of the time, to the suppression of utopia with the institutionalisation of sociology in universities, and finally to the recent idiosyncratic revival of interest in utopia by a handful of influential sociologists. Part III explores the three aspects in which, in Levitas’ view, utopia can be construed as method: as archaeology, ontology and architecture.

While the three parts coherently build the core argument and at the same time gradually increase our understanding of Levitas’ broad and affectionate conception of utopia, they are sufficiently self-standing to be read individually. The focus of each part is quite distinct: the two consequent chapters to the introductory one in Part I demonstrate the ubiquitous presence of the utopian content in the arts, in particular in the colour blue and in music, whereas Parts II and III are predominantly concerned with the utopian dimension in thought. Although the space that Levitas dedicates to the work of past and contemporary scholars and artists is biased in favour of the ideas of Bloch and Wells, the range and diversity of names on which she draws is impressive: it ranges from the celebrated figures of Aristotle, Kandinsky, Habermas, Rorty and Harvey to less well-known artists including the Argentinian Jewish composer Osvaldo Golijov, and to not (yet) particularly recognised scholars of utopianism such as Miguel Abensour . Although these authors and the interpretations of their ideas are in most instances expounded in a very accessible way, it sometimes feels slightly overwhelming to follow them. Furthermore, even if Levitas’ voice is clearly present in the critical analyses of these works and in the introductions and conclusions of each of her chapters, it does inevitably get lost amidst the countless other voices which she evokes to support her own.

The most original section of the book is certainly Part III which provides some illuminating examples of how utopia can be employed as method of analysis of already existing accounts of society. Chapter 8 explores utopia in its archaeological mode, which entails ‘piecing together the images of the good society that are embedded in political programmes and social and economic policies’, and looks specifically at meritocracy, civil society and economic growth as conceptions of desirable social orders and policies that have been commonly deployed in the context of Western parliamentary democracy. Chapter 9 investigates the various utopian visions of the future from an ontological perspective in that that it exposes their underlying judgements about human nature. In the last chapter Levitas critically analyses some of the demands that often feature in modern portrayals of the good society and implicitly puts forward her own.

The main issue which I take with the book is rather straightforward and does not in any way make the book unworthy of reading. I understand Levitas’ underlying message, which is strongly motivated politically, to be that the utopian mode could prove instrumental in overcoming the ills of postcapitalism. I am simply not clear why Levitas wanted to frame this message in terms of calling for the link between utopia and sociology to be restored. In our efforts of constructing knowledge of our existence, she does not claim that we should start universally prioritising ‘those normative, prescriptive, future-oriented elements’ which she identifies as characteristic of the utopian method. Rather, she suggests that these elements should be reinstated specifically within the discipline of sociology. Levitas does not aim to ‘encourage and endorse this [utopian method] as a legitimate mode of thought and knowledge-generation’ in general – although I find that this is what she eventually achieves – but with respect to sociology in particular. Whereas it is true, and well illustrated in Part II of the book, that the utopian mode and sociology were in their emergence hardly separable, they have at present become almost completely detached from each other. I strongly agree that delineating the future in a reflexive and provisional fashion could be much more effective than trying to predict, forecast or scientifically model it, it is nevertheless the latter approaches that dominate the current teaching of sociology, as well as of other social sciences. Levitas must surely be aware of the ideological and institutional blockages that prevent utopia’s resurrection to centre stage in departments of sociology, but she does not mention them. Yet, if this is the kind of revival of utopianism which she really hopes for, I these blockages and proposals for their resolution would have to be spelled out.

Due to the continuous reiteration and other forms of emphasis which Levitas puts on the centrality of her core argument, the book appears primarily as a critique of sociology as a profession and of its apparent failure effectively to increase our understanding of how societies as wholes function. This unnecessarily narrows down the relevance of the utopian mode to a specific academic discipline which has by now assumed a life of its own.

Yet, my doubts that Levitas’s book could succeed in its objective of promoting utopia as the prime methodology which sociology as an academic discipline should embrace do not devalue the book, nor should they overshadow its numerous positive features. For myself I can say that the problems associated with Levitas’s core argument will not dissuade me from a second close reading which I aim to undertake for the purposes of my own research into utopianism, as the book deals very fully with the various past intellectual disputes and engagements with utopian thinking.