Marx & Philosophy Review of BooksReviews‘Phiosophy and the Event’, ‘Badiou and Philosophy’ reviewed by Robert Jackson 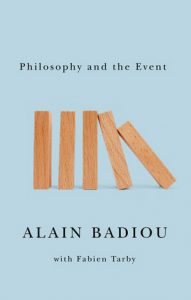 Alain Badiou and Fabien Tarby
Phiosophy and the Event 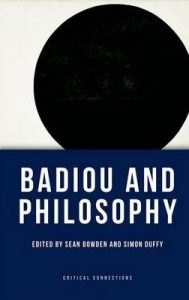 Robert Jackson recently completed a PhD at King’s College London. He works on the problem of …

Philosophy and the Event is an excellent introduction to the thought of the contemporary French philosopher Alain Badiou, best known for his recent collaborations with Slavoj Žižek in defence of the ‘Idea of Communism’. This easily accessible text is a collection of interviews with Badiou conducted by Fabien Tarby, in which Badiou gives an overview of his ideas and summarises the trajectory of his major works: Theory of the Subject (1982), Being and Event (1988), Logics of Worlds (2006), and his forthcoming book, The Immanence of Truths.

The interviews are arranged according to the themes of politics, love, art and sciences, corresponding to the four ‘conditions’ or truth procedures that support Badiou’s conception of philosophy. The major focus of Badiou’s work is the subject of these truth procedures and its relation to the creation of new possibilities, which he denotes as the Event. On this basis, Badiou seeks to formulate the philosophical structure of the exceptional, that which breaks with the normal routines of existence, and to locate its consequences in the world. This process requires a subject that is faithful to the Event. The fidelity of this subject is to act in accordance with the Idea, the name of the perspective associated with the Event.

Although a number of important introductions to Badiou’s work already exist (such as Hallward 2003, Feltham 2008), these interviews, in reproducing the engaging style of his public lectures, offer another welcome point of entry to his ideas. For Badiou, like Plato, the medium of speech is superior to that of writing, and thus he has often chosen dialogue with others as the preferred form in which to transmit his ideas. Moreover, the text gives an interesting, if summary, glimpse into the future development of his research.

Badiou is a difficult thinker to categorise without seeming to fall into apparent contradiction. He wilfully adheres to the ‘Idea of Communism’, whilst expressing reluctance to label himself a Marxist. Badiou is at once a thinker associated with a move beyond post-structuralism and yet is immersed in many of its themes. Thus he acknowledges the “critical and anti-dogmatic” aspect of thinkers like Jacques Derrida, but he eschews the post-modern trend of reducing philosophy to a general rhetoric. Thus, Badiou claims that a philosopher must “begin with things and not with words” (PE, 113).

Furthermore, Badiou’s criticism is not “an intellectual exercise”, but a fidelity to events like May 1968 that consists “in organisations, in the taking up of positions and in an activism that conserves the memory of things” (PE, 14). At the same time, he argues that those who resist the existing order must confront the difficult task of articulating an alternative to it. In these interviews Badiou recalls some of his own important political interventions, such as speaking out against Islamophobia or against the ‘barbarism’ of Sarkozy. Less convincing, and certainly more confusing, is his proposal for a fusion between the states of France and Germany: “the emergence of an absolutely new figure in the world” (PE, 26). It seems to me that Badiou’s more recent analysis of the possibilities arising from mass movements in the Middle East, Turkey and elsewhere, has more promise.

For Badiou, where politics ends, love begins. Thus, he argues that while politics tries to construct unity from difference, “love shatters the primary units and establishes the reign of the Two over the experience of the world” (PE, 40). Algebraic formalisation may not be your idea of romance, but it takes all sorts. Indeed, by abstracting from the content of amorous relationships, Badiou emphasises the creative aspect of love against its presentation as a contract, and its all too frequent “suffocation by the State” (PE, 45).

Badiou’s thoughts on artistic subjectivity are no less interesting, but more immediately troubling. His claim that “there is no such thing as popular art”, only “music of entertainment”, seems to run the risk of turning the exceptional into elitism (PE, 80). For Badiou, artistic greatness arises from the innovation of form and this is merely diffused in more popular works. In other words, it’s Bach over the Beatles chez Badiou. Nevertheless, Badiou’s fascination with the ‘impurity’ of the cinema and his conception of Communism as a radical political egalitarianism would seem to contradict this in practice.

As a former disciple of Louis Althusser, Badiou’s work has from the outset been concerned with the scientific method and he remains committed to extracting it from its “subjection to the capitalist mode of production” (PE, 93). He appears to share Althusser’s search for a generic ‘scientificity’ common to all particular sciences. Badiou defends his work’s focus on mathematics and logic over physics and biology, by arguing that there are no truly new questions opened up by the latter disciplines that would modify the constructions of his philosophy. In fact, Badiou argues that biology hardly merits the status of a science, and claims that its scientific component belongs to chemistry. He also suggests that the philosophical uses of physics have been essentially limitative since Kant (PE, 97).

The prospect of approaching Badiou’s major works can be a daunting one. The breadth of his intellectual project is remarkable, from the complex mathematical abstractions of set theory through the history of science to political analysis, love and the aesthetic appreciation of poetry. His attraction lies perhaps in having the audacity to address eternal classical problems with an overarching system. This alluring combination of a “scent of danger” and “hopeful possibility” makes Badiou a thinker with exceptional “expressive power” (BP, 119), as James Williams observes in Badiou and Philosophy, a new collection of essays edited by Sean Bowden and Simon Duffy.

These essays seek to explore both Badiou’s philosophical heritage and the multiple opportunities for new philosophical enquiry emerging from his distinctive world-view. Thus, in the first section, Tzuchien Tho, Anindya Bhattacharyya, as well as Bowden and Duffy, interrogate the mathematical foundations of Badiou’s thought. They examine his relation to the development of set theory from Georg Cantor to Paul Cohen, and the mathematician Albert Lautman’s ‘dialectic of problematic Ideas’. They also tackle Badiou’s unorthodox reading of Plato and the still-evolving significance for his work of the theory of categories. These investigations probe Badiou’s fundamental thesis that ‘mathematics is ontology’, his claim that the study of ‘being qua being’ can be subtracted from philosophy and discussed in the language of mathematics. Whilst readers should be advised of the challenges posed by the logical arguments involved here, perseverance is encouraged.

The potential benefits of such abstract and often obscure spade-work are suggested in the following section in which Ed Pluth, Talia Morag, Nina Power and Williams seek to decode the new philosophical view that appears to arise from Badiou’s subterranean absorption of these mathematical innovations. Central to this view is Badiou’s theory of the subject and its enigmatic role in his adherence to a vision of materialism that exceeds itself. Pluth tries to demonstrate that this ‘strategy’ of materialism is based primarily not on a conception of matter, but on the egalitarian removal of segregated regions of being. Yet these innovations have drawbacks. Williams argues that Badiou’s framework has negative, even ‘violent’, consequences for his conception of time. Meanwhile, Morag tries to make Badiou’s metaphysics more palatable by drawing out its implicitly pragmatist elements. Power explores Badiou’s concept of the political subject, and, as a former disciple of Althusser, his unusual commitment to a non-ideological subject.

In the final section, Justin Clemens and Adam Bartlett, Brian Smith, Graham Harman and Jon Roffe respectively trace the influence on Badiou’s thought of four major figures in twentieth century thought: Lacan, Sartre, Heidegger and Deleuze. These essays help to explain Badiou’s relation to psychoanalysis and anti-philosophy, his particular concern with the moment of decision, and the central importance of Being for his thought. Roffe’s essay argues that even where Badiou’s thought fails, such as in his critique of Deleuze, it helps to generates provocative insights. Overall, this collection demonstrates not only the depth of Badiou’s work, but also, as Oliver Feltham points out, “its peculiar capacity to generate new philosophical investigations”. Whilst the chapters are therefore by nature open studies rather than definitive statements, they are stimulating and thought-provoking essays.

In some cases more dialogue between chapters would have been welcome, such as between Smith and Power, which could have further illuminated the complex emergence of Badiou’s philosophy from the combined influences of Sartre and Althusser. Smith contrasts Badiou’s “optimistic theory of the subject” (BP, 222) with Sartre’s pessimistic estimation of the prospects for creating a durable group, one that resists decay into serialised individuality. But since Badiou’s optimism about group action is predicated on the rarity of the political subject, we might judge that Sartre’s extension of subjectivity to every individual is in fact more optimistic in the long-run.

Badiou’s modern Platonism radicalises the rationalisation and formalisation of the world through a strict mathematical materialism of structures. From this arises the necessity of the exceptional, the Event. When reproached with introducing a miraculous element into philosophy, Badiou brands his critics “mechanical materialists – of the variety that Marx, already, […] crossed swords with” (PE, 126). Applying this label to the late Daniel Bensaïd, himself a sympathetic reader of the revolutionary messianism of Walter Benjamin, is perhaps a deliberate polemical move highlighting Badiou’s rejection of even the least mechanical practitioners of the classical Marxist tradition.

In his essay, Pluth notes that many hold reservations about Badiou’s frequent recourse to religious conceptions, such as fidelity, grace and his valorisation of St Paul. Yet, Pluth argues that when faced with the danger of suturing philosophy to the sciences, the possibility of “enabling theological […] adventures” is worth the wager. Badiou himself would argue that a consistent atheism can only be constructed on the basis of mathematics. Like returning to Plato’s cave armed with the illumination of an Idea, Badiou acknowledges that his project to “force a transformation of knowledge on the basis of truth” is fraught with risk (PE, 108).

Badiou’s forthcoming work, The Immanence of Truths, will address the coming together of the four ‘conditions’ or truth procedures. For Badiou, philosophy is that which creates a site of co-existence of these conditions. Its uncertain subject is of a complex and de-centred nature. It remains to be seen whether this investigation of the relation of philosophy to the full life will overcome concerns about elitism or the miraculous that arise from Badiou’s emphasis on formalisation. Nevertheless these two books are highly recommended as a fascinating path into the ideas of a philosopher who has reconfigured many of the impasses of modern thought.