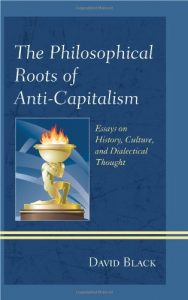 Philip Walden holds a doctorate in philosophy from Southampton University. The PhD includes …

This book contains a collection of essays exploring the relationship between philosophical themes and the study of capitalism. The first chapter evaluates the innovative work of Alfred Sohn-Rethel who studied the development of money in ancient societies and showed the importance of Marx’s approach for understanding the character of early economic activity. One conclusion by Black from his analysis is the following: ‘The general value form reduces all actual labor to the expenditure of labor-power – in a bad infinity of unlimited “growth” and accumulation of capital. Under the thumb of capital, labor is substance, not subject. Labor is not actualized as subject in a conflict between “good” use-value and “bad” exchange-value. “Labor”, as the proletariat, only becomes a “subject” in its self-abolition and uprooting of value-production.’ (33-4)

This comment is controversial as it does not account for labour’s struggle to overcome its subordinated status within capitalism. Michael Lebowitz explains how labour not only changes itself in a form of self-development, via its role within the production process, but is also transformed by participation in collective struggle: ‘Self-development, however, always involves more than just the process of material production. For Marx, it meant in particular the development of socialist human beings through collective struggle. He consistently argued that the process of struggle produces altered human beings, new subjects’. (Lebowitz 2003, 181) The character of struggle implies that labour is beginning to reject its subordination to capital. Without struggle there can be no revolutionary transformation of society. Whether this development means that labour becomes a subject is contested, but the point is that without the resistance of labour to the domination of capital, the reduction of labour to the imperatives of valorisation cannot be overcome. In contrast Black’s formula is ambiguous, suggesting that the character of labour is defined by its value aspect. However, Marx considers the character of labour-power is explained by its process of alienation or separation: ‘In fact, the seller of labour-power, like the seller of any other commodity, realizes … its exchange value, and alienates … its use-value.’ (Marx 1976, 301) Hence an integral aspect of class struggle is that labour tries to establish control over his/her labour-power. The point is the value character of labour is not necessarily durable and its condition can be transformed if labour rejects its role as labour-power. This process is explained by labour regaining its control over its own labour-power which has been alienated to the capitalist for the purpose of valorisation and capital accumulation.

Nevertheless, despite these limitations Black has also outlined a convincing criticism of the dogmatic view that the philosophical logic of Hegel represents the logic of capital: ‘Hegel’s Logic, even as it represents the logic of capital, is like all of his philosophy imbued with an absolute negativity, which can be read as anticipating Marx’s critique of capital, in which the logic of the system intimates a realm beyond it.’ (40) However, in my opinion, this comment still defers to those critics of Hegel who consider him an apologist for capitalism. According to Norman Levine, Marx was actually influenced by the criticism of the early development of capitalism in the work of Hegel. What Marx rejected in Hegel was the conception of philosophical and historical development as the work of the spirit. This rejection enabled him to reconstruct Hegel in an historical materialist manner: ‘It is my contention that Marx eliminated the Speculative substance from the ‘Lordship and Bondage’ chapter. He did not look upon ‘Lordship and Bondage’ as an evolutionary stage in the achievement of ‘Absolute Knowledge’ but repositioned their relationship into a politico-economic content. Within the structure of Marx’s thought the combat between ‘Lordship and Bondage’ was not over consciousness, but over labor: the capitalist, the lord, sought to expropriate the labor of those in ‘bondage’, or the proletariat.’ (Levine, 238-9) Consequently, Marx was interested in how Hegel would enhance his understanding of capitalism and in this process rejected his idealist philosophical system. The result was the reconstruction of spirit as labour.

Black outlines a detailed study of the ideas of the Situationists and explains how they contributed to the understanding of class consciousness, reification and the prospect of transforming present capitalist society into an emancipatory alternative. Unfortunately he concludes by supporting the perspective of Postone that the working class cannot transcend its value character within capitalism and so the aim should be the abolition of work: ‘For a modern class to “qualify” as an historical subject it must have economic power of some sort, political representation, intellectual leadership and a “program,” “historic mission” or raison d’être (though in truth no class in history has ever achieved power consciously in this sense). In the case of the bourgeoisie, the “program” can only amount to being, or aspiring to be, at home in the alienation of capitalism. The working class, on the other hand, has never had a “program” for abolishing value-production, and in that sense can be said to have never been more than a pseudo “historical subject,” whose objective role has been to push capitalism into developing more efficient forms of valorization. If, as the young Marx said, the proletariat is nothing if it is not revolutionary, then the revolutionary being of the proletariat can only be constituted by its not being, and it can only fulfill its subjectivity by abolishing itself.’ (72-3)

An astonishing comment. Not only does it deny the importance of empirical events when labour has struggled against its subordinate relationship to capital. It also denies the theoretical significance of the perspective of Marxism, which is to move towards abolishing value-creating production via influencing the character of the class struggle. Marxism is the programme for the abolition of the value status of labour. Thus in another work, Lebowitz explains that Marx wrote Capital in order to encourage workers to struggle against the domination of capital. The aim was the creation of a society in which workers are not reduced to value, or socialism and communism: ‘As long as workers do not understand that capital is the result of exploitation, they will always be dependent upon it – no matter how much they may struggle on particular questions, such as questions of “fairness” (e.g. fair wages). And that is why Marx wrote Capital. Precisely because of capital’s inherent tendency to develop a working class that looks upon capital’s requirements as “self-evident natural laws”, Marx’s purpose was to explain the nature of capital to workers and to help them understand the necessity to go beyond capitalism.’ (Lebowitz 2010, 20-1) And: ‘Understanding that capitalism is a perverse society that deforms people and that capital, itself, is the result of exploitation is not enough, however. If people think there is no alternative, then they will struggle to do their best within capitalism but will not waste their time and energy trying to achieve the impossible. For that reason, a vision of an alternative is essential.’ (Lebowitz 2010, 21)

The above quotes indicate that the struggle to achieve an alternative to capitalism is complex and is not guaranteed by any ‘laws’ of history. But the fact that success has not yet been realised in achieving the aim of socialism does not mean that labour is nothing more than the creators of value within capitalism. Marx wrote Capital in order to put forward a serious argument outlining that labour could overcome its role as the expression of valorisation and so make advances towards creating a society that was an alternative to capitalism. The crucial problem was that this prospect of change could only occur through the role of class struggle. Contrary to what some commentators have argued there is no inevitability to the demise of capitalism and the realisation of socialism, owing to the difficulties involved in defeating the economic and political power of the capitalist class. However, these difficulties can be explained in empirical terms and are related to the influence of Social Democracy and Stalinism. But it is unsatisfactory to reject dogmatically the view that the working class is a subject. The character of the working class as a subject is not defined by success in history and is instead the outcome of the role of labour as the creators of capital. Tony Smith explains: ‘For Marx, the concept of capital is not exhausted by capital’s claim to the status of essence (or subject, or self-moving substance, and so forth). That is only the beginning of the story. The more important part of Marx’s concept of capital is the destruction of that claim. Capital’s claim to be the essence of the valorisation process is ontologically false: ‘The secret of the self-valorization of capital resolves itself into the fact that it has at its disposal a definite quantity of the unpaid labour of other people’ … The heart of Marx’s concept of capital, I believe, is the critique of capital fetishism; ontologically, capital is a mere ‘pseudo-subject’ and ‘pseudo-self-moving substance’. The process of ‘creating capital out of capital’ is nothing but the exploitation of wage-labour.’ (Smith 2009, 181-2)

The crucial point is not the status of labour as a subject. This issue cannot be resolved by the application of philosophical, historical materialist, or political economic criteria. Instead what is important is that the capital-labour relation is based on exploitation. Capital is created by labour. Labour does not have any control over this process. This accounts for class struggle. Marxism argues that this situation can only be resolved when the domination of capital is ended. Until that occurs what will characterise reality is the continuation of the class struggle. It is not Marxist doctrine that imposes a revolutionary status onto the working class. Rather, revolution is the possible outcome of the class struggle and expresses the political basis to resolve the conflicts of the class struggle in the interests of labour. (Lebowitz 2010, 110-2) In contrast, Black cannot explain the offensive of capital against labour since the 1980s because he glosses over the importance of the class struggle and its causes. These methodological problems are connected to his reduction of the alienated role of labour in value creation and the effective denial of the antagonistic aspect of the economic connection between capital and labour. The subversive point of Marx’s analysis is that labour can overcome its reduction to the role of value. Black seems to deny this.

But it would be unsatisfactory to consider this book limited by tensions within its reading of Marxist political economy. The majority of the book offers important arguments providing reasons for recognising the importance of philosophy for studying the character of contemporary capitalism. Black also relates these themes to the historically important work of Marx, Hegel and Lukács. This book can be recommended in the study of the role of philosophy for promotion of perceptive study of capitalism.