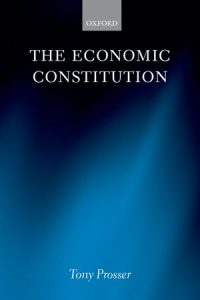 In this book, Tony Prosser sets out to provide an account of areas of the British constitution which have been neglected in public law and other areas of academic study, particularly those concerned with economic management. The book focuses on the different methods and institutions directly utilized by the government, rather than through the establishment of separate agencies, such as utility regulators (with the exception of a consideration of financial services regulation partially carried out by independent agencies). The book has two main objectives. One is to map out the intricate networks that are involved in the devising and implementing of economic policy, and to examine their coherence and their abilities to communicate and cooperate; both of which, Prosser argues, were deeply challenged during the 2008 financial crisis. The second is to assess the legitimacy and accountability of those arrangements as they work in practice. Those two main objectives are addressed in the following areas of economic management and their associated, relevant major institutions: taxation and borrowing, public expenditure, monetary policy, regulation of financial services, including banks, government shareholdings and industrial policy, and public procurement.

The book could interest a Marxist readership particularly with regards to its chapters on the regulation of financial services (Chapter 7) and government procurement (Chapter 9), given that they both have something to offer in terms of extracting data with which to form critiques of the currently prevalent neo-liberal paradigm that could serve Marxist causes (although all chapters are relevant in this regard). This review, although it will touch upon other chapters, will therefore focus on Chapters 7 and 9, particularly in terms of their potential to provide data for a critique of the problematic issues raised in institutional and process values where neo-liberal strategies of economic management are concerned. Chapter 9 could also, as will be argued, inspire a potential feminist critique of the extremely individualized model of contracting in public procurement due to EU procurement rules to the exclusion of other values, and related weaknesses in “New Public Contracting” (Vincent-Jones, 2006).

The first chapter contextualizes the reader and, amongst other things, offers the various meanings of the term “economic constitution”, drawn from legal and social theory and European Union (EU) law and politics, to act as a prism through which to understand the constitutional arrangements of the UK. As far as the book is concerned, the term “economic constitution” provides both a descriptive and a normative framework through which to assess not only the institutional map of economic management in the UK, which has both domestic and international dimensions, but also issues of legitimacy, deliberation, and accountability, including the extent to which arrangements of the formulation and implementation of economic policy possess inner coherence.

One of the shortcomings of the book is precisely that Prosser does not sufficiently contextualize the reader within the unique position of the UK in constitutional terms. Prosser makes mention of the lack of a written constitutional base in the UK, in comparison to “many countries with a written constitution [with] key provisions relating, for example, to taxation, expenditure, and property rights” (8). In Chapters 2 and 3, he moves on to map out the institutions involved in economic management at a domestic and international level respectively. In both chapters the notion of the UK economic constitution, although in one sense it is made explicit that it is plural in nature, nonetheless remains largely vague, and this has nothing to do with the empirical reality of, as Prosser argues, “a lack of a constitutional scheme for the allocation of powers in the UK system, and also due to a preference for the use of various types of arm’s length bodies to carry out public functions” (22), with the added complexity that the international dimension brings in. This is not necessarily about making the book more accessible to non-specialist readers, either. The vagueness arises from stylistic weakness: an unequivocal comparative explanation right from the outset, comparing the UK’s plural constitutional arrangements with, for example, the US, would have made things significantly clearer. This is not to argue that Prosser should have made the conclusion he would reach clear before engaging in a substantial analysis of the ideological and institutional arrangements in question. Rather, the term “constitution” in a UK context would have benefited from a comparative reference point, located in one specific section of the book (rather than relying on, for example, a passing reference such as the one Prosser makes to the German Federal Constitution in the first chapter) that would have rendered its usage, prior to the concluding chapter, less ambiguous.

The lack of a succinct definition of terms is not restricted to the case just mentioned. Prosser does this again with “matters of confidence” (86) with regards to taxation and expenditure proposals, in which he only provides that taxation proposals, as matters of confidence, mean that a government will be forced to resign if defeated on them. It could be assumed that Prosser expects the reader to
have an a priori understanding of the way the Westminster system, or parliamentary democracies generally, work, or an understanding of what matters of confidence fully entail by inference from his partial discussion. Both expectations are misguided, with the former in particular betraying a latent belief in a standard (that of parliamentary democracies and how they operate) that is so obvious it does not need further explication, and therefore that the book’s readership is automatically meant to assume is the hegemonic ideal. The same can be said of Prosser’s nebulous discussions of ministerial responsibility, in which he does not sufficiently account for its workings (although one can vaguely deduce what it entails through a quote on page 92, and incomplete explanations on pages 248 and 249) and the manner in which it could therefore hinder transparency, as well as the convention of collective responsibility.

Chapter 7 deals with the regulation of financial services, and is of particular interest because of its potential to provide valuable ammunition with regards to the neo-liberal paradigm that caused the financial crisis of 2008. However, given that the book is limited to examining institutional and process values, there is not much data that can be extracted in this regard, with the exception of the discussion of the Turner Review (2009), produced by the Chair of the Financial Services Authority (FSA, abolished in 2013) in 2009 at the request of the Chancellor of the Exchequer. The Turner Review, as Prosser argues, criticized the FSA for having:

focused too much on the supervision of individual institutions, and insufficiently on wider sectoral and system-wide risk. The report was also highly critical of the FSA’s regulatory approach based on a philosophy that markets in general are self-correcting and that risk management should take place at the level of the individual firm. This resulted in supervision of individual institutions rather than the entire system, a focus on ensuring that systems and processes were correctly defined rather than challenging business models or strategies, and a balance between conduct of business regulation and prudential regulation that was biased towards the former. (170)

In the chapter’s conclusion, Prosser makes an interesting remark with regards to the former FSA’s regulatory style, and whether the Coalition government’s reforms will bring effective changes in order to be more inclusive to broader sectoral and system-wide risk, as well as increasing openness to other interests or any form of public interest, all of which were neglected through the former Government’s pressure to adopt a neo-liberal “light-touch” approach to regulation.

Chapter 9 is interesting insofar as it examines procurement and the use of contract by government, and the manner in which regulation may be effected through contractual terms, given our era of the gargantuan privatization and contracting out of nearly every service one can think of (just one example is the role of ATOS and Serco in welfare services). With regards to EU procurement rules, Prosser, drawing upon Ian Macneil’s (1980) and Peter Vincent-Jones’s (2006) work, provides an interesting critique of the individualized model of contracting that they promote, to the exclusion of models based on long-term cooperative relationships and characterized by values such as reciprocity and solidarity. Such values are also largely missing from the “New Public Contracting” (Vincent-Jones 2006), which is characterized by the delegation of powers and responsibilities through contractual arrangements that preserve central government controls and powers of intervention. Such models therefore provide powerful, alternative relational visions of contractual arrangements that go beyond economic concerns. It is the specific section of the book on individualization and relationality (224-5) that leads one into considering how feminist contract theories that go beyond the self-interested, autonomous “economic man” (sic) of classical and neo-classical economics (Ferber and Nelson 1993) could therefore be valuable in terms of shifting away from an excessively individualized model of contracting. Feminist contract theories could, amongst other things, promote altruism and the importance of relationships (see, for example, Mulcahy and Wheeler (2005) for some of these themes).

Although there are some merits to this book, one being that it provides in-depth coverage not available elsewhere of constitutional rules with regards to economic management in the UK (and thus, as Prosser states in the Preface, provides the UK equivalent of Sabino Cassese’s La Nuova Costituzione Economica), the book largely reads as a superficial piece in critical terms. The book is useful insofar as it serves as a manual to the institutional arrangements that govern the formulation and implementation of economic policy, as well as those that govern accountability procedures. Given that the UK lacks a written constitution such as in the US (although to describe it as unwritten is somewhat misleading, as it is largely contained in disparate written sources) economic management being fragmented and dispersed is therefore unsurprising: Prosser, somewhat prosaically, conceptualizes this as a “plural constitution” in the concluding chapter. The book also seems to be a tool through which to prod further work on effectively conceptualizing constitutional thought with regard to the institutional coherence of the UK economic constitution, rather than provide imaginative theory itself. As Prosser argues, “The lack of institutional coherence is precisely where more developed constitutional thought would be helpful” (248) Ultimately, the book functions as a reasonable guidebook to institutional and process values relating to UK economic management, but is considerably lacking in terms of analytical and conceptual originality.