Marx & Philosophy Review of BooksReviews‘As Free and as Just as Possible: The Theory of Marxian Liberalism’ reviewed by Huang Dongbo 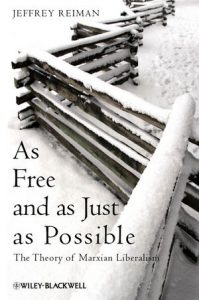 Jeffrey Reiman
As Free and as Just as Possible: The Theory of Marxian Liberalism

Huang Dongbo is a PhD student in philosophy at Peking University. This year he is a visiting …

What aspects of Marxism, as it emerges in Marx’s writings, can be combined with liberalism? What aspects of liberalism, as it emerges in Rawls’s writings, can be combined with Marxism? These are the basic questions of Jeffrey Reiman’s new book, As Free and as Just as Possible. As he says in its Preface: ‘I think that the time is ripe for a philosophical theory of justice that combines Marx’s insights … with the liberalism that the socialist states have lacked’ (xii). The book is divided into seven chapters and a conclusion. Chapter 1, ‘Overview of the Argument for Marxian Liberalism’, provides a brief introduction to the whole book, which helps readers to quickly grasp its main ideas. By doing this, Reiman actually offers a general account of what Marxian Liberalism is. He argues that Marxian Liberalism is a theory of justice that results from combining certain liberal beliefs with certain Marxian beliefs, in order to protect people from unwanted coercion and to make a society that is `as free and as just as possible’. As he puts it: ‘In sum, liberalism indicates the goal of the theory, and Marxism characterizes the conditions for achieving that goal. Thus the theory is called Marxian Liberalism’ (26).

Chapter 2, ‘Marx and Rawls and justice’, focuses mostly on the basics of Marx’s theory of capitalism and of Rawls’s theory of justice. Reiman claims that Marx revealed the ideology of capitalism: ‘The normal perception of what goes on in exchange give rise to the ideological illusion that capitalism is uncoercive’ (37). After offering a brief account of Rawls’s theory of justice as fairness, he discusses Rawls’s own quite sympathetic view of Marxism and suggests where Marxian Liberalism goes beyond Rawls’s view: ‘I shall go beyond Rawls and defend the use of the difference principle in light of the labor theory of value as a necessary means to evaluate the justice of any economic system’ (55). Reiman argues that there is no intrinsic antipathy between Marxism and justice, and then explains how Marxian Liberalism interprets Marx’s comments on justice in light of its historical conception of justice.

In Chapter 3, ‘The Natural Right to Liberty and the Need for a Social Contract’, Reiman presents a secular interpretation of Locke’s argument for the natural right to liberty and proceeds to a Lockean contractarianism. Reiman argues that, because private property is coercive, in order for it to be justified, all people who exist or will exist must consent to it. Furthermore, theoretical consent is necessary, as he writes: ‘it is rational for actual people to count that theoretical consent as morally equivalent to actual consent’ (91). According to Reiman, Rawls’s theory has often been attacked for presupposing moral rights while Locke’s contract is not vulnerable to this objection. So, he claims that the social contractarianism that grounds Marxian Liberalism is Lockean rather than Rawlsian in nature, although he uses Rawls’s original position.

Then, in Chapter 4, ‘The Ambivalence of Property: Expression of Liberty and Threat to Liberty’, Reiman mainly discusses Marxian Liberalism’s understanding of the relationship between private property and liberty. He uses the ‘ambivalence of property’ to explain the two-sided nature of property’s relationship to liberty, i.e. ‘while ownership of private property promotes the liberty of the owner, it also threatens the liberty of the nonowner’ (94). For Reiman, Locke and Kant (and Nozick and Narveson) already realized that the right to large and unequal property holdings is a threat to the liberty of nonowners, but he adds that ‘this understates the nature of the threat’ (11). Reiman argues that Marx went beyond Locke and Kant in revealing that property is not merely a threat to liberty, but a form of social coercion, which Reiman calls ‘structural coercion’. He argues that the invisibility of coerciveness is the core of what Marx called ideology: ‘structural coercion can operate through free choice’ (117). Reiman thus criticizes libertarians for falling for capitalist ideology, and contends that Marxian Liberalism is liberalism ‘without ideological blinders’ (121).

In Chapter 6, ‘The Marxian-Liberal Original Position’, Reiman deploys an imaginary contracting situation modeled on Rawls’s original position, in which the parties’ general knowledge includes the Marxian theory of the conditions of liberty as well as some factual beliefs characteristically held by liberals, such as that people have an interest in maximizing their ability to act freely, and that a state is necessary to protect liberty and property. In the Marxian-Liberal original position, as Reiman contends, parties will agree to a limited state in which liberty is protected against unwanted coercion, and to an egalitarian form of capitalism, in which property is subject to the difference principle understood in light of the moral version of the labor theory, so as to make it compatible with people’s right to liberty.

Having presented the principles agreed to in the Marxian-Liberal original position, in Chapter 7, ‘As Free and as Just as Possible’, Reiman proceeds to sketch out the nature of the just society – the state and the economy – that Marxian Liberalism calls for in the current historical period. ‘I will suggest how a society made up of such a state and a capitalist economy can be thought of as a form of capitalism acceptable to Marxists, and a form of communism acceptable to liberals’ (191). For Reiman, such a Marxian-Liberal society is now, and for the foreseeable future, ‘as free and as just as possible’. In the Conclusion, Reiman summarizes his ideas about a new theory of justice.

Throughout the book Reiman provides a robust defense of Marxian Liberalism: an imaginative combination of the natural right to liberty with the Marxist critique of private property. ‘Marxian Liberalism’s conception of justice is … a combination of Rawlsian and Marxian views’ (61). More specifically, Reiman presents and defends Marxian Liberalism by combining certain liberal beliefs – chiefly, that people have a natural right to liberty, understood as a negative right not to be subject to unwanted coercion – with certain Marxian beliefs: chiefly, that private ownership of means of production is coercive. As Reiman puts it: ‘Marxian Liberalism carries forth Marx’s attempt to ground a concrete liberalism’ (213). Therefore, Marx’s critique of the injustice and domination endemic to capitalism must be combined with the commitment to individual freedom which is the core value of liberalism.

Reiman’s use of comparison and synthesis is especially impressive. His fruitful analysis of Rawlsian liberalism and Marxian theory shows the strengths and limits of each; he attempts to overcome the one’s weaknesses by acquiring the other’s strong points, and then go on to formulate a new theory of justice. He also discusses and compares Nozick’s, Narveson’s, and particularly Cohen’s ideas on related themes, and wants to go beyond them by way of dialectical synthesis.

Many of the concepts and arguments that Reiman develops in this book are thought-provoking. For instance, in what he calls ‘the moral version of the labor theory of value’ (123), Reiman defends Marx’s labor theory of value as a way of measuring the structural coercion rather than accounting for prices. Another interesting example is ‘the labor theory of the difference principle’ (128). ‘Thinking of economic distributions as distributions of labor,’ he maintains, ‘enables a stronger defense of the difference principle than Rawls was able to give’ (216). In other words, it is a principle for reducing social and material subjugation to the minimum possible, whilst maximizing liberty overall. Thus Reiman uses these concepts to transform and combine Marxian and Rawlsian theory, and to thereby provide a solid foundation from which to defend his theory of Marxian Liberalism.

Undoubtedly, it is really a challenging project for Reiman to construct such a new theory of justice combining Marxism and liberalism, and to criticize the thinking of political philosophers on both the left and the right. However, Reiman successfully achieved these goals, even though a few points require further discussion, such as his understanding of Marx’s conception of communism, and his original idea of ‘the labor theory of the difference principle’.

This book is based on a series of published articles, which show that Reiman has been considering the combination of liberal and Marxian beliefs for more than 30 years (see Preface). It will be of interest primarily to those who are concerned with philosophical discussions of liberalism and its application to contemporary problems, and with discussions of Marxism and its significance for post-capitalist times. Moreover, historians of political thought, particularly those with an interest in Rawls, Marx, Locke and Kant, will also find much of interest in it. Reiman tries to develop his ideas and arguments in non-technical language, and he makes great efforts to define technical terms, where necessary, in plain English. So, it is an accessible work that provides an excellent entry-point for students who are interested in these topics as well.

Reiman’s book is also of great practical importance. In modern China, for example, many scholars think that there is a sharp antagonism between Marxism and liberalism and neglect the possibility of making a combination of both in order to better safeguard the justice of society. A similar problem also exists in the Western world. As Reiman says, ‘It is common … to think of Marxism as an enemy of liberty.’(12) In this way, Reiman’s exciting book is a new and timely contribution for us today.