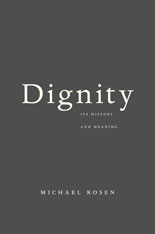 Throughout the post-war era, the language of human dignity has been central to providing the conceptual framework for the discourse on human rights. For example, the Universal Declaration of Human Rights asserts that “all human beings are born free and equal in dignity and rights.” Yet the concept of dignity has also been ridiculed by the likes of Schopenhauer, Marx, and Nietzsche for its empty moralism or deemed to be redundant and hence dispensable in relation to the discourse of human rights. In Dignity: Its History and Meaning, Michael Rosen, Professor of Government at Harvard University, sets out to present to present a philosophical history of and reflection on the concept of dignity from a broadly Kantian perspective.

Based on his Benedict Lectures at Boston University, Rosen’s book is rather short, consisting of only three chapters. Rosen devotes the opening chapter to a historical survey of the various senses of the term ‘dignity’ within the Western philosophical tradition, where he identifies three main senses of dignity that have emerged over the course of the last two millennia. Rosen points out, the different senses of dignity are not mutually exclusive, but rather blend together at times and within certain thinkers, which makes it rather difficult to disentangle them at times, though Rosen succeeds admirably in this. In the second chapter, he considers philosophically the jurisprudence of key cases and distinguishes between the Catholic and Kantian conceptions of dignity. Finally after concluding the second chapter with an illuminating puzzle regarding our duties to the deceased, Rosen devotes the third and final chapter to the specifically Kantian conception of dignity and its differing interpretations. The result is a concise book that is accessible to the general reader while at the same time worth the attention of the specialist.

Rosen identifies four primary conceptions of dignity found within the Western intellectual tradition. The first conception treats dignity as a status concept, the sense in which we describe someone as a dignitary or speak about the dignity of an office one holds. In this case, some value is attached to one’s position within society or within some larger order. From its origins in a hierarchical social order, Cicero expanded this conception to encompass potentially all human beings through its status of humanity within the cosmic order, though it nonetheless retains a distinctively hierarchical cast. Second, there is dignity derived from a characteristic with intrinsic value, a characteristic which may not necessarily be restricted to human beings. For the purposes of moral discourse, this is by far the most important conception, and two main competing traditions stand out with respect to it: the Catholic/Thomistic tradition and the Kantian tradition. Third, there is a behavioral conception of dignity, dignity as a form of personal bearing manifested in one’s conduct. This is the sense involved when we describing a person as dignified. Fourth and finally, there is a sense in which dignity involves respectfulness, that is to say, as requiring expressions of respect for the dignity of a person. This last conception is critical to the treatment of prisoners as governed by the Geneva Convention.

Rosen devotes the greatest attention to the second conception of dignity, dignity as intrinsic value, as this conception is most clearly connected with the development of the discourse of human rights. One possesses human rights in virtue of one’s intrinsic value, which those rights aim to secure and protect. According to Rosen, Thomism/Catholicism and Kantianism offer the two main alternative philosophical accounts with regard to this particular understanding of dignity, and in the second chapter, he discusses in some detail the operation of both accounts within the German Grundgesetz as interpreted within the German judicial system.

In the Catholic account, the dignity of a being is determined by its particular role within a divinely-constituted natural order; as such, dignity is not limited to human beings per se, but is possessed in different forms and to a different degree by all beings. If that order is hierarchical with respect to humanity, then the different forms of human dignity will reflect that hierarchy. Thus, the Catholic conception is not inherently egalitarian. As Rosen points out, Pope Leo’s pronouncements on the dignity of labor in Rerum Novarum presupposed a hierarchical social order in which that labor was embedded. The Catholic Church’s shift to a widespread acceptance of the political egalitarianism of democratic governance, though momentous in its effects, is a relatively recent phenomenon, dating back only to the aftermath of the Second World War. As a result, one currently finds in Papal pronouncements the deployment of the language of universal human rights, though with a distinctive Catholic emphasis. Though Rosen’s discussion of the evolution of Catholic thought on this matter is certainly valuable, I shall focus on his discussion of the Kantian account of dignity, within which Rosen’s own views fall.

From the perspective of the political left, the Kantian alternative is far more attractive. In contrast with the Catholic account, Kant famously grounded human dignity on rationality, thereby generating an inherently egalitarian, democratic, and secular account of the concept that fit well with his support of the French Revolution. Furthermore, his understanding of the historical significance of that Revolution is situated in a progressive meta-narrative of emancipation. Finally, as I will indicate below, his distinction between dignity and price provides the basis of an important critique of neo-liberalism.

Within the Kantian tradition, Rosen maintains that a “voluntarist” interpretation of Kant is dominant among contemporary Anglo-American commentators, as for example Christine Korsgaard and Onora O’Neill. According to this voluntarist reading, Kant bases dignity on the capacity for rational agency. Rational agents confer value on objects through choice constrained and directed reason, and this capacity for rational choice is what possesses intrinsic value as end in itself. The First Formulation of the Categorical Imperative (Universal Law), then, provides an analysis of rational willing, while the Second Formulation (Humanity) provides an account of intrinsic value.

Against this reading, Rosen argues that if the choice of rational agent confers value, then one cannot argue that such choices confer value on rational agents themselves without being either circular or self-refuting in one’s reasoning. Furthermore, proponents of the voluntarist reading tend to treat Kant’s account on duties to oneself as peripheral to Kant’s moral theory, whereas it is actually a central feature of Kant’s thought, and it is certainly the case that in the Formula of Humanity, Kant gives equal billing to one’s self and others. As an alternative reading, Rosen offers a “Platonist” interpretation of Kant that locates intrinsic value in morality itself and by extension humanity insofar as it is capable of morality. Morality, then, provides a transcendent core of intrinsic value, thus rendering dignity impervious to the vicissitudes of change. Human beings can neither create it nor destroy it, but only honor it, that is, express respect for it. This enables Rosen to explain why we have a duty to provide a proper burial to the dead even though no one actually derives a benefit from such treatment, for by doing so we treat them with dignity in the sense of honoring or expressing respect for their humanity.

One obvious problem with the Platonist interpretation, acknowledged by Rosen himself, is that this interpretation connects dignity to the noumenal self beyond the space-time of appearances and thereby threatens to entangle dignity in the thickets Kant’s metaphysics. Furthermore, the terminological bifurcation of readings into voluntarist and Platonist is misleading in a way that is telling. The use of the term ‘voluntarist’ suggests the primacy of volition or will whereas Kant is clearly a moral rationalist in that he emphasizes reason in that his account of will, which includes both a negative component, independence from determination by sensible causes, or willkür, and a positive one, reason itself, or wille. On the other hand, Platonism smacks of dogmatism in Kant’s sense of assuming a starting point without undertaking the project of critique, thus missing the distinctively critical character of Kant’s thought. In short, for Kant, whereas rational agents confer value upon objects through choice, such value is only of a subjective nature. The objectivity of humanity as an end in itself derives from the impossibility of one’s consistently willing the universal adoption of a maxim of selfishness in which oneself would be reduced to a means in the pursuit of another’s ends.

Now, the claim to dignity, to be treated as an end in itself and not just as a means, has profound consequences for the morality of market economies. In the Third Formulation of the Categorical Imperative (Universal Lawgiving in the Realm of Ends), Kant famously distinguishes between price and dignity; human beings as ends in themselves possess dignity, not price. In his first chapter, Rosen characterizes this passage as the central core of Kant’s moral theory, but fails to develop the implications in the rest of his book. The claim to dignity on the part of human beings sets stringent moral limits on the operations of the market by prohibiting the subordination of human beings to the operations of market. This is particularly important with respect to human labor where the tendency of capitalist markets is to reduce human beings to the status of mere means of capital accumulation rather than as ends in themselves. Furthermore, the distinction between price and dignity is made in connection with Kant’s introduction of the concept of a realm of ends, a system of persons as ends in which each person participates as a co-legislator of the laws to which they are subject. Kant’s vision here is radically democratic in its implications regarding the structure of economic relations and constitutes the makings of a serious critique of neo-liberalism. It should come as no surprise, then, that with the collapse of the neo-liberal project as a result of financial crisis and recession, the language of dignity has been deployed in an oppositional mode as part of resistance to the restoration of neo-liberalism through the imposition of austerity. Stephane Hessel in his booklet Indignez-Vous! and Los Indignados in Spain, for example. But perhaps this is asking too much. Rosen does succeed in his task of providing a succinct and illuminating account of the history and meaning of the concept of dignity.