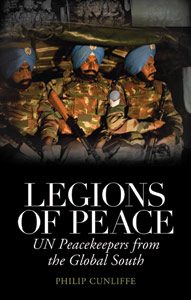 “How does a blue armband vaccinate against the racism and paternalism of people whose only vision of Africa is lion hunting, slave markets, and colonial conquest; people for whom the history of civilisation is built on the possession of colonies?” (163) This question, posed by the radical Congolese independence leader Patrice Lumumba before his overthrow, is at the centre of Philip Cunliffe’s examination of UN peacekeeping. Lumumba asked this of the Western participants in UN missions, and Western statesmen and armies are most commonly the subject of the voluminous literature on the politics and structure of the UN. But Cunliffe approaches the subject in a different way. If Lumumba’s suggestion is true, and the United Nations is merely a continuation of the imperialist project of the West, how to explain the increasing predominance of peacekeepers from the developing world in the UN’s missions abroad? Does this suggest that the UN has in some way risen above the imperialist politics of old? Or is it a new form of the old imperialism, now with the nation-states of the global South as willing participants? This is the question Legions of Peace seeks to examine.

The book has a somewhat complex structure, as it deals with three main themes. First, the role of the global South in UN peacekeeping as an empirical matter of significance; second, how this is to be interpreted with an eye to international relations theories of the functioning and role of the UN as a whole; and third, what this implies for contemporary theories of imperialism. This corresponds roughly, but not quite, to the chapter sequence, so that the argument at times moves between different levels of scope and abstraction. Nonetheless, Cunliffe admirably balances these different theoretical arguments within the book as a whole. The central argument therefore emerges clearly. For Cunliffe, the mistake of most rival IR theorists is that they either have taken the global South’s contribution to peacekeeping as a minor phenomenon, mainly motivated by the financial gain, or that they have seen it as a welcome contribution to the further internationalisation of the world and the establishment of ‘democratic peace’. This mirrors more generally the rival interpretations of the United Nations prevalent in IR debates today. The UN is seen as either riven with the conflicting self-interests of states, and therefore a weak body overly dominated by opportunistic developing countries, or as a bulwark of internationalist liberalism that serves as a counterweight to, or even the dissolution of, the old imperialist unilateralism and colonialism and which now serves to intervene only for peace and conflict resolution.

Legions of Peace persuasively and thoroughly makes the case that both these interpretations are wrong. To put it somewhat simply, rather than seeing the UN as either weak and undesirable or strong and positive, for Cunliffe the UN is both strong and undesirable. Strong because the UN plays a major role in containing and enmeshing the nation states of the global South in the ‘international order’, both practically and ideologically; and undesirable because it is a continuation of Western imperialism developed for the West and on Western terms (and more specifically the United States). Cunliffe argues that far from being solely a matter of the unilateralism and territorial conquest familiar from the Victorian image of empire, imperialism has always manifested itself to a considerable degree in multilateral and indirect forms. From the ‘peace congresses’ where imperialist powers divided the colonies between them to the systems of trust states and ‘mandate territories’, the imperialist powers have found multilateralism often at least as effective as unilateralism – not least because it meant the possibility of sustaining imperialist domination while avoiding the risk of war between the powers. The United Nations, constructed by the United States with its Western allies during WWII, was explicitly modelled after the imperialist ‘trust’ relations, where states and peoples would be constrained by Western power and guidance until they were ready for such independence as the international system could offer. Indeed, Cunliffe suggests with some plausibility that the very idea of an international system, dominated by major powers via the Security Council and possessed of the powers of legitimate intervention anywhere for reasons of ‘peace’, is an explicitly imperialist form of political inequality between states. In this sense then, he suggests a much greater continuity between the UN’s political structure and the multilateral forms of imperialism of the past than normally assumed.

The role of peacekeeping in this argument is then a similar one. As Cunliffe rightly notes, the great powers’ ability and self-declared right of global intervention was unsustainable in financial and political terms if it had to be enforced by the Western states alone. Therefore, from the very early stages on the colonial powers made widespread use of askaris and spahis, i.e. large numbers of troops drawn from the colonised peoples themselves. While training, arming, and officers would be provided by the imperial power, most of the fighting and the maintenance of armed control that underpinned the empires themselves was done by such ‘native troops’. For Cunliffe, the role of the global south in these peacekeeping operations, increasingly undertaken by troops from the developing world but paid for by Western countries – who themselves contribute fewer and fewer soldiers – is the contemporary equivalent of the role of the askaris. Their task is to make the maintenance of the international order that supports the major powers of the day cheaper for those same powers: cheaper financially, as those troops cost considerably less to maintain and deploy, but especially cheaper politically, as Western troops are not dying for obscure causes in remote countries to nearly the same degree. They serve the role that the British Indian Army did in colonial times: to be the “imperial fire brigade of the Raj” (163).

If this is true, what then of Russia and China as Security Council powers? And why would Third World countries participate? Cunliffe’s response to these objections is to point to a plurality of motives and constraints for the non-Western states. Based on extensive interviews with participants and diplomats from the countries involved, he suggests many of the states take part because they seek a greater profile, military experience, and diplomatic advantage within the international states system, rather than for financial gain. The motives are political, rather than monetary. But he points out that they seek this advantage within the international order as it is – and therefore accept its maintenance to the benefit of the great powers of that order. On his reading, then, the Russian and Chinese participation via the Security Council, and especially the increasing agreement within that council since the fall of the USSR, is a sign of their continuing pacification by the United States in particular, and also a sign of their own (sub-)imperialist ambitions. (Contrast this to Mao’s description of the UN as “the imperialists’ international police division” (196).) What is essential for Cunliffe is that the United Nations in this way gives ideological and political legitimacy to interventions all over the globe that would otherwise not be accepted, or at least be seen for what they are: enforcing a liberal and imperialist view of world order on ‘trouble spots’.

Sadly there is no space to give a proper treatment of the sober, detailed, and thorough argumentation and evidence presented in Legions of Peace, but its interweaving of political polemic, interpretation of data, discussion of IR theory, and historical contextualisation is impressive. As a description of the mechanism of UN interventionism today, it is very persuasive. If the argument has a weakness, it is in the discussion of the ideological side of UN peacekeeping and the UN as an institution. For Cunliffe’s argument to hold, the Third World states involved must to some extent at least labour under a persistent delusion in their participation in UN processes that it is beneficial to them instead of uniting against this imperialist legitimation mechanism. He suggests that the UN’s modern form is a response to the great anti-colonial movements of the postwar period, an attempt to trap these in a web of imperialist delegation. But were all the efforts of the Non-Aligned Movement, of UNCTAD developmentalism, and so forth then simply deluded? Is this not underestimating their view that a transformation in the UN could be achieved, where a genuine internationalism could be opposed to the false? More importantly, perhaps, in his discussion of imperialism he does not mention at all one important argument in liberal interventionism: namely, the absence of political autonomy in the states in which intervention is to take place. To the liberal imperialist UN structure, Cunliffe several times simply opposes “political autonomy and self-determination” (261). But a supporter of international institutions could readily object: where are these to be found in the first place? Was the Rwandan genocide a sign of political autonomy? Did the peoples of Iraq, who desired but failed to overthrow Saddam Hussein, have self-determination? It seems to me that while these objections are by no means insurmountable – and Cunliffe has written about them elsewhere – doing so would require a more subtle state theory. Such a theory would see the state forms of the developing nations as determined by their domestic social and political inequalities, not just, or even primarily, by their international relations. Otherwise, this type of anti-imperialist perspective is vulnerable to the weakness, common on the left, that it becomes an uncritical endorsement of ‘local’ dictators and exploiters over comprador ones.

That said, this book makes for a major contribution in the burgeoning critical literature on liberal imperialism and interventions. Cunliffe gives much food for thought to those on the left who have hope that the UN can become a vehicle for a genuine internationalism.