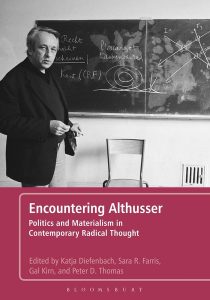 Not long after being imprisoned in a Stalag would the controversial and allusive philosopher Louis Althusser come to compose a fragment-style essay. The focus of the essay would be another philosopher of great controversy, whose thought, in the immediate aftermath of the second world war, would be re-discovered, sojourned with, conjugated and transliterated by a number of gifted thinkers of twentieth century France. This philosopher was Hegel.

The essay’s title – ‘Man, That Night’ (1947) – is itself distinctly Hegelian, being drawn from a lecture delivered in 1805-6. In that public address Hegel offers a soliciting (and what would become a Lacanian-inflected) consideration, one with which Althusser would himself labour with to the very end (75): “Man is that night,” Hegel declares, “that empty nothing”. Midpoint in the essay, beyond focus on the all-important void, on negativity, Althusser provides what in light of the present volume is an uncanny frontal assessment of Hegel’s reception in France at the time of the essay’s composition: Hegel is a thinker, deems Althusser (1997), “dismantled”, “torn to pieces, trampled underfoot, and betrayed,” yet a thinker who “profoundly haunts and dominates an apostate age.”

It is true to say that the summative project of Encountering Althusser, perhaps one could even say its Gestalt, is remarkably reminiscent of this early post-war assessment of an uncultivated, repressed Hegel, not to mention reminiscent of Althusser’s own project of reading the philosophical and political potential of Marx anew (xiii, xv). Given what was to become his decidedly anti-Hegelian stance or at least his constant oscillation to and fro Hegelianism (78), significant here is that beautiful irony: that what Althusser said of Hegel could quite easily be said of Althusser himself. Althusser is a spectre haunting an apostate age; recognition of this marks the backdrop of a shift in critical thought. Indeed, the present volume is testament to the very fact that the time for fishing merely upon the surface of Althusserian philosophy has ceased.

Encountering Althusser spans the length of twenty-one essays, divided into four parts, each part attentive to a theme that occupied Althusser at different stages of his thought. However, the caveat here is that each theme is also said to have animated Althusser more or less throughout his life’s work – an insistence that, Antonio Negri’s thesis of a ‘turn’ (Kehre) to the contrary, counteracts any proclivity to compartmentalise – rupture, even – Althusser’s philosophy into an earlier and a later stage (154); a compartmentalisation Althusser arguably inscribed into Marx’s own writing (the so-called ‘epistemological cut’, or coupure) – I say ‘arguably’ given Althusser’s own conception of knowledge qua production (263).

Sidestepping this hypothesis of (dis)continuity that the volume always seems to be broaching – the important thing, I think, is that for better or worst Althusser was always committed to communism (247) and to the task of conceiving a materialist philosophy “worthy of communistic politics” (75) – one may ask the more fundamental question of what it means to encounter Althusser’s thought in our own time, while concomitantly querying how such an encounter can inform the overcoming of capitalism. Three interwoven topics are noteworthy in this respect. (My selections inevitably narrow the sheer breadth of the volume.)

1. Spinoza. The volume contributes little to a renewed analysis of Althusser’s encounter with Hegel, despite the rapid rebirth of Hegelianism in 1960s France, a time very much Althusser’s own. The less well-known – but by no means unconnected – renaissance of Spinoza scholarship at the same time in France the volume finds more essential (155). The obsession with labelling the audacious Spinoza a ‘dead dog’, together with Pierre Macherey’s materialist readings – such as Hegel ou Spinoza (1979) – of Spinozist concepts pushed beyond Hegelian comprehensions, were events influential for Althusser’s own attempts to produce effects useful to materialism through his engagements with non-contemporary figures like Spinoza. In brief, through a strategic use of Spinoza, Althusser conceives process without a subject and therefore process without a ground.

2. Ideology. Contrary to the ideological idea that ideology is simply a veiling of real life in conscious representations, and therefore a veiling to be radically overcome, this important Marxist concept is now potently conceived as an eternal, “‘omnihistoric’” (289), that is, omnipresent resident in the collective life of human beings, much like the unconscious is for Freud (290). The claim, made by Marx and Engels in the Manifesto of the Communist Party, that communism abolishes eternal truths therefore appears to be redundant in the case of ideology according to the Althusserian theorisation.

Indeed, we are neither inherently rational nor political animals, Althusser asserts, but ideological: homo ideologicus. It is for this reason that those organised subjects committed to the real movement which would abolish the present state of things cannot entrust themselves to a place or a time to come which would move humanity beyond ideology. Perhaps this fact is the human being’s aberration (89), its night, its factical flaw, but the point is that, for Althusser, this fact is the law of the world and for that should evoke neither laughter nor tears but the will to understand – and to intervene! Politics is the creation of ideological, and therefore material, effects (154).

The articulation of psychoanalysis and ideology is essential here. What is the relation between concrete ideological formations and the unconscious (despite ideology’s eternality, Althusser always focuses on “the historical singularity of ideologies” (157))? How does the logic of capital capture the separate logic of the “aleatory abyss of the human” (Althusser 1999, 23) and of the apparent indestructibility of desire that this abyss opens up (291)? At times Althusser doubts whether any conceptualisations could be mustered – only an incomplete analysis was left to us by the French philosopher. However, such concepts could begin to be produced through an historical materialist revaluation of the unconscious and the ideological constitution of the subject, and therefore of ‘what the I and Subject are, against the mythology of an hegemonic, transparent and self-knowing subjectivity.” (292) Althusser thus realigns with the Manifesto: there must be a radical reappraisal of a most traditional idea: of the Ich and its purported self-transparency.

3. Reproduction/the Aleatory. The formation of capital was an enclosure of human relations through a violent and contingent (aleatory) act of accumulation (262). Our daily life under capitalism is no more than the becoming necessary of this violent and contingent act, primarily through but not reducible to the gradual tightening of economic compulsion. This becoming necessary of the aleatory event, which is ever-formative of capitalism, underpins Althusser’s theorisation of the reproduction of capital’s conditions of possibility, in which, in “the final polemic on Marx”, Althusser labours with concepts rendered possible by Marx’s comments on the Asiatic mode of production and on primitive accumulation, comments counter-intuitive to the more logical/developmental (read idealist) necessities colouring certain pages of Das Kapital (265). The result of this? A questioning which asks how the unity of capitalism is to be destroyed is null and void in its metaphysics, in that such a questioning assumes capitalism to be an accomplished fact. The question of critique for Althusser instead circles around the fact that capitalism is always a fact to be accomplished (265). Politics begins here.

Encountering Althusser is, overall, to encounter the ebullition of encounters that, precisely, is Althusser’s thought. Beneath the obvious “unified intention of a subject” – the subject ‘Althusser’ – lies “the aleatory foundation” (265). But above all the Marxist philosopher pays homage to the aleatory that defines any encounter worthy of its name, and does so in the name of, or rather for, Marx.