Marx & Philosophy Review of BooksReviews‘Dangerous Liaisons: The Marriages and Divorces of Marxism and Feminism’ reviewed by Chris Byron 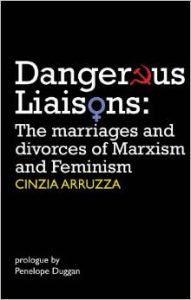 Cinzia Arruzza
Dangerous Liaisons: The Marriages and Divorces of Marxism and Feminism

Dangerous Liaisons by Cinzia Arruzza is most certainly a well written book and ideal for anyone interested in the political and theoretical history of the relationship between feminism and Marxism. If anyone is looking for a history of this relationship, I can recommend this book without hesitation. But if one is looking for a book that qualitatively advances the discourse and theory of Marxism and feminism, this may not be the best place to look. And at times the relationship between historical review, and theoretical development, seem in conflict.

In the Prologue, written by Penelope Duggan, she states the “goal of this book is look at new ways of integrating the ideas of multiple oppression and exploitation and identities into a more developed Marxist analysis of social relations in capitalism, that is to integrate contradictions such as women’s oppression and racial oppression into the Marxist analysis … of class society and thus overcome the separation and hierarchization of oppression of which many Marxist currents have been guilty” (14-5). But Arruzza describes her aim as being “a brief and accessible introduction to the issues of the relationship between women’s movement and labour and social movements and of the links between gender and class” (20). The latter claim is the one that is true. If the reader goes into the book expecting the latter, then the book is a success.

Dangerous Liaisons is broken down into four chapters. The first two chapters deal primarily with history, and the relationships between the fight for socialism, and the struggle for women’s’ liberation. The third chapter deals with the development of feminist and Marxist theory. The final chapter presents possible resolutions, one of which is proposed by Arruzza, for rectifying the tensions between feminism and Marxism.

The first chapter, titled ‘Marriages…’, covers a lot of ground in a short amount of space. Arruzza is able to tie together the long history of feminist and socialist struggle dating back to Mary Wollstonecraft, through the first wave of feminism, the Maoist revolution and concluding with the second wave of feminism. Throughout this chapter various notable figures like Rosa Luxemburg, Marx and Engels, Clara Zetkin, Louise Michel, etc., are discussed in good summary fashion. Along the way Arruzza has some interesting things to say, both hypothetical and factual. For instance, when discussing the relationship between women’s’ liberation and the Bolshevik revolution, she informs the reader that ‘in 1920 a decree legalized abortion. The Soviet Union, therefore, became the first state in the world to give women the right to legal, free abortions’ (41).

The second chapter is titled ‘…and divorces’, and is a historical analysis of the overall break up between feminism and socialism. Oftentimes the breakups were not feminists abandoning socialism, but socialist abandoning feminists. Stalin is guilty of this serious mistake. “[T]he bureaucratization of the Soviet Union and the victory of Stalinism brought the first real complete divorce between the workers’ movement and women’s specific interest and needs” (61). This factoid, among others, leads Arruzza to offer an interesting rebuttal to those who believe Lenin(ism) led to Stalin(ism). For those that do believe there is mostly a clear cut pathway between Lenin and Stalin, she suggests that “the history of the undisputed changes on the question of women’s rights and living conditions, their self-determination, the extent to which the traditional patriarchal family was superseded and the question of sexual freedom, is a valid criteria for verifying the truth of this so-called continuity” (63). But the divorces are not all Stalin’s fault. Nearly all the communist parties of the third international followed the party line and began the process of divorcing the struggle for socialism from the struggle for women’s liberation. And in Italy Carla Lonzi wrote a book, that when translated into English is titled We Spit on Hegel. The divorces between socialism and feminism, in terms of revolutionary practice, were practically complete by the end of the 70s.

Chapter three is where the book departs from the previous two chapters. The first two chapters – which are roughly two thirds of the book – are primarily a history of revolutionary practice and organization. The third chapter deals primarily with the attempt to theorize where Marxism and socialism, can be married, or ought to be divorced, from women’s liberation. Arruzza discusses all the usual positions, Marxists who think we can talk about class without gender, feminists who think we can talk about gender as a class, and finally feminists who think we can talk about gender without class. This chapter is filled with summaries of highly regarded theorists like Judith Butler, Julia Kristeva, and Lacan, to name but a few. And Arruzza in only a few pages is able to lay out the strengths and weaknesses of numerous philosophical dispositions.

It is not until chapter four that Arruzza talks about a much needed queer union of Marxism and feminism, and develops her own view as to how this merger should take place. Arruzza first details the past discussions of merger, as theorized by Nancy Fraser, Heidi Hartmann, and Iris Young. Hartmann set the groundwork for the debate when she accepted that ‘the concept of class alone is not sufficient…and must be integrated with the concepts of gender, race, nationality and religion’ and the hierarchy that puts women below men in the capitalist system, while ‘not the logic of capitalism’s internal functioning’, is still a system of patriarchal oppression that ‘is intertwined with capitalism’ (116). The framework of the debate is subsequently about the nature of this intertwinement, and the degree to which it is or is ‘not the logic of capitalism’s internal functioning’. And Nancy Fraser accepted Hartmann’s dual system approach towards analyzing systems of ‘distributive’ (i.e., more economic) and ‘recognitional’ forms of oppression. It’s only after a compact summary of all these different views, and historical development, covering over a hundred pages, that Arruzza uses the final five pages to explain her own view.

According to Arruzza the ‘reconstruction of some of these debates … has attempted to follow a logic and classifications not generally used in the feminist debate, seeking instead to attempt to circle around an unresolved political problem … namely, the historical, political and theoretical relationship between gender and class and the possibility of developing a theory that reconciles Marxism and feminism’ (124). And she believes that we need to develop ‘an outlook that can make sense of intersections and decipher the complex relationship between patriarchal holdovers that drift like homeless ghosts in the globalized capitalist world and patriarchal structures that, on the contrary have been integrated, used and transformed by capitalism [and] calls for a renewal of Marxism’ (128). As she concludes ‘the point is not whether class comes before gender or gender before class, the point is rather how gender and class intertwine in capitalist production and power relations to give rise to a complex reality, and it makes little sense and is not very useful to attempt to reduce these to a simple formula’ (128).

The forced closure of the book is a bit unfortunate. Instead of really answering the theoretical problems, and actually addressing how we can go about reconciling class and gender, Arruzza points to the unanswered questions and leaves them unanswered. Of course since the book is primarily a history book that’s not a problem. But the prologue by Duggan, and the overall tone of the book, suggests it’s trying to be a bit more than history. There’s no denying that there is good summary contained in this work, and that this book is a great guide to the history of theory and praxis inside the struggle for workers and women’s liberation, and so long as the reader goes into the text expecting history, they should be satisfied.