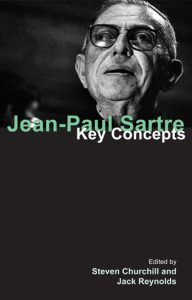 C McMenamin was recently awarded a PhD from the CRMEP, Kingston University for a thesis entitled …

As set out in the editors’ introduction, this collection of short articles on Sartrean concepts embraces the ‘totality’ of Sartre’s work (2) – both in terms of the breadth of media in which Sartre expressed his ideas and the evolutionary span of his career. Rather than selectively focusing on his “greatest hits”, this volume aims to introduce readers to a fuller picture of this prolific thinker through nineteen self-contained articles. Following an introductory article by Gary Cox that situates Sartre and his work in a socio-historical and biographical context, the book is divided into three broad sections that move from earlier to later works. To give a sense of the volume as a whole, this review will outline the contents of these three sections with an emphasis on political content before concluding with some remarks on the collection as a whole.

Part One of the volume consists of five articles under the title ‘Psychology, Psychoanalysis and Literature’. Beata Stawarska’s essay gives a solid exposition of the formative influence of Husserl on Sartre’s early work on the imagination, which is complemented by the subsequent essay by Christian Onof on ‘Sartre’s understanding of the self’ as developed in The Transcendence of the Ego and Being and Nothingness. Through a reading of Nausea and The Transcendence of the Ego, Steven Churchill’s article argues successfully against a straightforward shift in Sartre’s work from ‘insular philosopher’ (64) to engaged activist, proposing that his embrace of realism informed all of his work. In ‘Sartre: novelist and playwright’, Adrian van der Hoven gives a chronological overview of Sartre’s works of literature from the beginning to end of his career with each work situated in relation to Sartre’s philosophical ideas and the socio-political context of its publication. In the final essay of the section, Betty Cannon gives an interesting exposition of the development of existential psychoanalysis and Sartre’s relation to Freud’s work, in which she compares and contrasts Sartre’s concept of the project as an ‘original gut-level … conscious choice of a way of being in the world’ (81) to the latter’s concept of the unconscious.

Under the title ‘Ontology: Freedom, Authenticity and Self-Creation’, Part Two of the collection focuses on central philosophical concepts in Sartre’s work, principally in relation to Being and Nothingness. Sarah Richmond opens this section by tackling ‘Nothingness and Negation’, relating the conceptual development of ‘Nothingness’ in Being and Nothingness to Sartre’s earlier work, The Imaginary, as well as Heidegger’s descriptions of “das Nichts”. In a complex article, Richmond outlines the ontological claims made by Sartre and discusses briefly problems and objections. Søren Overgaard deals with Sartre’s concept of ‘The Look’ by painting the theoretical backdrop from which it emerges as a critique of Husserl’s and Heidegger’s accounts of intersubjective relations. In his article on ‘Knowledge’, Anthony Hatzimoysis analyses key passages of Being and Nothingness to flesh out the ‘intuitive’ model found in Sartre, its relation to Descartes and Husserl and the relation between knowledge and consciousness. In one of the best articles of the collection, David Detmer deals admirably with the question of ‘Bad Faith’ and the conditions of possibility for self-deception. His article pays close attention to the uses of the concept immanent to Sartre’s texts, which produces a full and thorough exposition in this succinct genre. Jonathan Webber’s text on ‘Authenticity’ approaches this concept through an appeal to secondary literature in order to clarify its ambiguity in Sartre. In such a brief article, the introduction of extrinsic interpretative categories seemed to dilute the focus a little.

The final two essays in the second section herald a shift to a more direct emphasis on the intersection of politics and philosophy in Sartre’s work. Paul Crittenden discusses ‘The Fundamental Project’, developing the nascent political implications of Betty Cannon’s discussion of the project as a situated yet ‘conscious choice’. Crittenden outlines the relation between freedom, the project and action, pointing out that Sartre does not intend the project to be understood as a state of ‘capricious’ freedom, but rather as the choice of action situated ‘in global structures and…in the totality that I am’ (Sartre BN1 459; BN2, 479) My actions then are ‘directed to an end that is linked … with the recognition of a lack that is to be made good.’ (153) The political implications of Sartre’s emphasis on the free project are made explicit in the final essay of Part Two, which discusses ‘Self-making and alienation: from bad faith to revolution’. Thomas W. Busch traces the development of the understanding of freedom in Sartre’s work and the increasing importance of ‘the power of circumstances [la force des choses]’(Sartre 1974, 33). Busch provides a solid overview and introduction to the later concepts that Sartre uses – from the ‘in-itself’ and ‘for-itself’ of Being and Nothingness to the ‘emphatically more actional and material notions’ of ‘praxis’ and the ‘practico-inert’ in the Critique of Dialectical Reason. (171)

These two essays form a bridge into the final section of the volume, ‘Ethics and Politics’, which focuses on Sartre’s later thought. It opens with William L. McBride’s article on Sartre as a ‘political public intellectual’, which outlines his development as a committed activist whose engagement with post-World War II socio-historical events was both intellectual and political. McBride situates Sartre’s ‘engaged’ writings in relation to the politics of the intellectual landscape of the era (in particular to the work of Merleau-Ponty and Camus). Tackling the philosophical development of Sartre’s political commitments, Peter Caws introduces ‘The Theory of Groups’ that emerges in the Critique of Dialectical Reason Vol.1, outlining Sartre’s later analysis of the shifting relations between the individual and the social – from the series, to the group-in-fusion, to the pledged group, etc. The subsequent two essays expand upon the ethical dimension of Sartre’s work. Thomas C. Anderson gives an account of how the ontological shift to a ‘realistic materialism’ in Sartre’s work impacts his conceptualisation of ethics. His later “realistic” ethics is an ‘ethics that is also a politics’ (201), which rethinks the negative evaluation of intersubjective relations in Being and Nothingness and produces ‘a greater understanding of the thorough dependence of human beings on each other and, consequently, their need to seek the fulfilment of the needs of all.’ (205) In ‘Hope and Affirmation’, Marguerite La Caze draws from the interviews with Benny Lévy (Hope Now) to expand upon a ‘third ethics’ based on a concept of reciprocity inspired by Lévinas. According to La Caze, such an ethics would ‘[provide] the basis for a revolutionary transformation of society instead of a political or economic such as Marxism.’ (208) This shift towards the messianic in the final interviews was one that was firmly contested by Simone de Beauvoir; as the concluding chapter makes clear, ‘Sartre’s legacy’ is a disputed one. In their final chapter, Churchill and Reynolds suggest that Sartre saw his work in its totality as underpinned by the primacy of ‘lived experience’ and the concepts of ‘human freedom and … self-creation’. (214) They give a good overview of his reception amongst the next generation of French philosophers, such as Derrida, Foucault and Deleuze, whilst considering his influence outside of the modern European tradition in relation to analytic philosophies of mind.

Overall, this collection provides a solid and useful exposition of ‘key concepts’ in Sartre. It is not a complete beginner’s guide, but would suit those with some philosophical foundation who are looking for an orientation in Sartre’s work. A cross-referencing index at the end of the book allows for a conceptually-focused approach across the individual articles, whilst further reading suggestions as well as an extensive bibliography build on the brief expositions included. In this sense, it would be a strong addition to any university library. Nevertheless, despite its aim to pay attention to the totality of Sartre’s canon, this collection still feels more heavily-oriented towards his earlier works, especially Being and Nothingness – most of Part Two is dedicated to key concepts from this text. Busch and McBride’s articles do a fine job of tracking the shifts between this earlier phenomenological period and later materialist work, but only one article deals specifically with a key concept internal to the Critique of Dialectical Reason Vol. 1 (i.e. Peter Caws’ article on ‘The Theory of Groups’). I felt that a greater focus on the specificities of the Critique would have benefited the volume overall as it is an often overlooked, yet incredibly rich and complex work – for example, the volume might have been developed with expositional articles on the definition of Sartre’s materialism or the relation between his existentialism and Marxist politics. As commentators have pointed out, this later work is Sartre’s attempt to account theoretically for the historical failure of multiple attempts at social transformation and to offer a theoretical framework that sustains the possibility for political change despite a great deal of pessimism. As such, further expositions of the theoretical content of the Critique would not only have given a fuller picture of the arc of Sartre’s philosophical and political work, but might also have provided a useful inroad for those seeking to analyse his work in light of current political concerns.