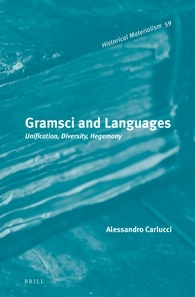 Antonio Gramsci (1891-1937) was not only a prominent Italian Marxist political philosopher, but also a vocal critic of contemporary society and culture. Additionally, Gramsci’s work on language makes him a very important (and also highly original and independent) voice in twentieth century philosophy of language.

Alessandro Carlucci, lector in Italian at the University of Oxford, has already edited a monographic issue of the Journal of Romance Studies devoted to New Approaches to Gramsci: Language, Philosophy and Politics (2012). In his recent book he attempts to offer an explanation of Gramsci’s originality ‘by looking at his lifelong interest in language, especially in questions of linguistic diversity and unification’ (xii).

In the Introduction (1-18), Carlucci presents the key theses explored in the three main chapters of the book (which additionally comprises a conclusion, an appendix, references and indexes). In the opening lines he observes that ‘Gramsci’s ideas on language were the ideas of a political leader, a man of action – one could even say ‘a fighter’, as he calls himself in a letter of August 1931’ (1). This is a very important remark, since from the very beginning the author stresses the ‘active’, rather than ‘contemplative’ (or ‘academic’) interest Gramsci held in language, and the importance of his political perspective. Carlucci stresses that ‘Leaving [Gramsci’s] politics aside, to present him as a specialist in cultural, social, and linguistic studies, could probably be equated to betraying the core of Gramsci’s ideas’ (3).

Chapter One (19-67) provides a thorough overview of the appropriate biographical, historical, cultural and linguistic background, and analyzes Gramsci’s relationship with Sardinian culture and language. Carlucci shows how Gramsci’s ties with Sardinian life helped develop his views on national language, on political issues involved in the usage of local languages, and his politically-oriented language awareness (including awareness of the language vs. dialect controversy). The author provides detailed reading and rereading of Gramsci’s correspondence (with focus on his use of Sardinian words and phrases, and recollections from childhood), discusses his journalistic activity, and also his activity and contacts in prison. Carlucci describes Gramsci, using his own words (from Prison Notebooks) about Marx: a personality ‘in whom theoretical and practical activity are indissolubly intertwined’ (21), he also stresses the philosopher’s approach to translation (in the sense of ‘cultural translation’), and his conscious choice of words (such as Sardinian comune). In the final remarks, Carlucci points to the perspective in which Gramsci viewed the relations between local and national languages, the reciprocal influence between specialized knowledge and popular culture, and also issues in political leadership (the relation between a unitary political leadership and the diverse groups following this leadership).

Chapter Two (67-145) offers a comprehensive discussion of Gramsci’s intellectual biography, of his direct and indirect sources in language studies, the echoes of Saussurean ideas, the ‘glottopolitical’ aspects of Lenin’s (or more generally, Soviet) influence, and the search for a universal language. Carlucci traces different lines of similarities and probable influences of the Course in General Linguistics upon the author of Prison Notebooks (though the direct influence cannot be proved), especially in his treatment of grammar (the synchronic description), the usage of metaphors, and certain social aspects of language as a code. It is most interesting to see Gramsci’s intuitions so close to the Swiss linguist’s ideas, especially his understanding of languages as social and historical products; though at the same time the Italian philosopher’s originality is clearly visible in the political commitment constantly present in his writings. Illustrative of his position is a fragment written down already in 1918 (definitely before the time of any possible Saussurean influence): ‘Language [la lingua] depends, to a large extent, on the complex development of economic and social activity, and reacts back on this development, determining changes in it, only to a very small extent’ (139), and also a later fragment, in The Philosophy of Praxis: ‘It seems that one can say that ‘language’ is essentially a collective term which does not presuppose any single thing existing in time and space. Language also means culture and philosophy … and therefore the fact of ‘language’ is in reality a multiplicity of facts more or less organically coherent and co-ordinated’ (175). It would be interesting to compare the Gramscian understanding of ‘fact’ (in connection with both language, and society) with the theory developed by Émile Durkheim.

It is possible that Gramsci heard about the synchronic and structural research on language during his stay in Russia (in 1922-23, and in 1925). At that same time he also became familiar with Soviet language policy and the Marxist critique of language, especially in the work of Nikolai Bukharin (a prominent Bolshevik, the General Secretary of the Comintern’s executive committee, arrested and executed in the Great Purge). Carlucci shows affinities between relevant parts of the Prison Notebooks and Bukharin’s Historical Materialism; predominantly the reflections on language and society, and also language policy and planning. Another issue important in Gramsci’s thought, and connected with his experiences in Russia is connected with the Soviet program of grammar and language education for the ‘popular masses’. Gramsci ‘shared some of the Soviet expectations about the potential of applied linguistics for teaching the popular masses how to use linguistic communication, and self-expression, more accurately and effectively’ (109).

An interesting part of this chapter is devoted to the movement of Soviet Esperantism. In the context of rationalizing and unifying linguistic communication, the author discusses Gramsci’s changing views (connected with the external context and different debates, both in Soviet Russia and Italy), noting that ‘he remained intellectually independent, and fundamentally consistent, clinging to his belief that language-policy interventions should not be expected to produce totally predictable results – they can speed up existing sociolinguistic trends, not arbitrarily create them’ (139). At the same time, Gramsci’s reflections on language policy and planning show his active response to the developments in the Soviet thought.

In Chapter Three (147-183), Carlucci demonstrates how Gramsci’s relationship with cultural and linguistic heterogeneity shaped his political and intellectual profile.He focuses on the important developments in the linguistics of the time, noting that ‘Gramsci always called for great care in assessing the validity of new methods, and the tenability of innovative discoveries’ (153). The author once again stresses that the Sardinian thinker developed his own ideas about the relations between language and cultural, social and political life; his ‘Marxist belief in the prominence of class relations did not marginalize his attention to issues which are today often associated with the notions of ethnic, cultural and sociolinguistic identity’ (161). In the final parts of this chapter, Carlucci discusses Gramsci’s Marxism, and his views on language and hegemony, and shows how he relates linguistic and cultural unification to the educational relationships ‘whereby teachers and pupils actively influence each other. The gradual process of cultural development that results from these educational relationships constitutes a relationship of “hegemony”’ (175). The author furthermore observes, following earlier work by Peter Ives, that Gramsci’s understanding of languages as a socio-historical products ‘reinforced his critical stance on the state and the formation of consent’ (181).

The Conclusions (185-200) are devoted to a brief discussion of ‘Gramscian links between language and politics’. Carlucci once again mentions the different layers and sources of influence in Gramsci’s thought and especially stresses his Sardinian-Italian bilingualism and experience with language/dialect diversity, his university studies in linguistics, and his encounter with Soviet applied linguistics and language policies. He concludes that ‘As a result of the influence of language studies. Gramsci’s thought acquired, first, a multifaceted complexity, largely unaffected by simplistic versions of either liberal-leaning rationalism or economic determinism. Unsurprisingly, his philosophy of praxis remained relevant throughout the second half of the century, when the epistemological foundations of various disciplines, including political theory, were greatly influenced by linguistic theory and language philosophy’ (200). Carlucci convincingly demonstrates that Gramsci’s sociolinguistic sensitivity was ahead of his time. It would be most interesting to provide a reevaluation of his thought from the perspective of contemporary sociolinguistic theories and Critical Discourse Analysis.

One might further add that also Gramsci’s views on metaphor in language were ahead of his time, as demonstrated by this fragment from the Prison Notes: ‘Language … is always metaphorical. If perhaps it cannot quite be said that all discourse is metaphorical in respect of the thing or material and sensible object referred to … so as not to widen the concept of metaphor excessively, it can however be said that the present language is metaphorical with respect to the meanings and the ideological content which the words used had in preceding periods of civilisation’ (76). As noted already by Peter Ives, this is an important argument against viewing language as nomenclature or representation.

The conclusions are followed with an Appendix (201-230) devoted to Gramsci’s legacy in the years 1937-2007, where the author provides a brief overview of Gramscian scholarship and a bibliographical and thematic guide to Gramsci’s writings. Carlucci observes that ‘while substantial collections, with extensive introductions and accurate commentaries, exist of Gramsci’s writings on subjects in which he did not receive a specialist training, such as pedagogy and education, none of the existing publications can be said to do justice to Gramsci’s linguistic reflections (213-4). In an earlier review of another book on Gramsci (Gramsci, Language, and Translation), I observed that a publication of an anthology of Gramsci’s texts (or just appropriate fragments) dealing with language and translation, together with a glossary of Gramscian idiosyncratic terminology, would be an idea worth considering. Carlucci’s study offers very interesting reading and rereading of Gramscian philosophy of language, and from this perspective, the need for such an anthology and glossary is even more evident.

The volume concludes with an impressive list of references (231-47), comprising a wide spectrum of works on Gramsci, philosophy in general, linguistics, Marxism, and several other issues. Very importantly, throughout the volume Carlucci’s critical reading of these texts is clearly visible. Gramsci and Languages is a very important addition to contemporary studies on Gramsci, it should be of interest also to philosophers (and philosophers of language in particular), and scholars in social, cultural, and political studies.