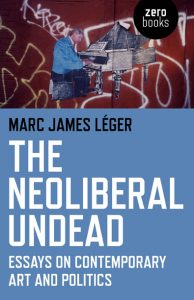 Mass upheavals of this decade now include Occupy, and the Squares movement in Europe. Such sustained radicalisation will eventually influence spheres, including art, distant from the putatively ‘proper’ site of politics. Canadian critic Marc James Léger’s recent contribution to these developing debates is The Neoliberal Undead: Essays on Contemporary Art and Politics.

Essays and conference talks previously published or presented by Léger from 2009 to 2012 are compiled in the first eight chapters. The last chapter is a 2011 interview with cultural theorist Imre Szeman. The Introduction is by Marc Herbst, co-editor of the Journal of Aesthetics and Protest.

The opening chapter assesses a 2010 controversy over statements from Marc Mayer, Director of the National Gallery of Canada (NGC). Mayer called for criteria of ‘excellence’ in selecting artists for inclusion within the Gallery. Hundreds of curators, artists, and writers signed an open letter criticising this allegedly neutral standard, historically complicit in the marginalisation of women, ‘ethnic minorities’, and First Nations peoples from the NGC.

Léger first responds with a familiar critique of the post-1968 movements, one which rejects identitarian politics and its ‘endless plurality of `petites histoires’ and `micro-practices’ (8). The NGC controversy over excluded peoples would be one instance of such politics. As Léger puts it later: in ‘neoliberal society, the struggle against capital has made identity struggles a matter of political formality’; such assertions sit uneasily with Léger’s valorisation of the Black Panther Party in the fourth chapter (70).

This critique also rejects those counter-hegemonic struggles which are based on radical historicism. The NGC controversy over the entirely constructed character of ‘excellence’ would, again, be such a struggle. Léger supports, via Žižek, the necessity to `“confront … this historicism as the ideological form of ‘postmodern’ global capitalism”’, a system itself already an anti-essentialist `“`risk society’ of contingencies”’ (8).

There is, second, a concern about the position of politicised artists vis-à-vis the institutional artworld. Chapter two expands upon this latter. Léger discusses a poster image which appeared on the internet during the 2011 uprising that overthrew the dictator Hosni Mubarak. The image shows three upraised forearms, with each hand making a peace sign; the slogan reads: ‘The Egyptian Revolution Will Continue Until Victory’. Léger comments, `Revolutionary art like this has no need for institutional legitimation. It is ephemeral and made anonymously to serve a cause’ (33).

This poster is, indeed, external to the institutional artworld. Léger’s interpretation is purely critical, however, rather than subtractive, and remains defined negatively by the artworld’s discursive parameters. Whether a work of art is anonymous and thus avoids the traditional valorisation of individual artistic subjectivity, or whether it is impermanent and thus cannot be exchanged as an object in the capitalist marketplace, is not relevant to grasping an artwork’s real political effects.

Questions posed by political struggle, not artworld discourse, would be more relevant. For example, the graphic’s black, white, and red colour scheme evokes early Soviet art (as noted by Léger). The distressed font suggests street graffiti and the sites of the Egyptian rebellion. The limited number and geometric alignment of the upraised arms evokes a disciplined order, unlike the amorphous crowds of Great Depression era, social-realist art. However, Léger refuses a full subtraction from the artworld, contending that it would ’almost completely [leave] the space of institutionalized culture in the hands of neoliberal technocrats‘ (33).

Further reasons for engagement with institutionalised culture are detailed in the third chapter, an overview of Toronto artists Carole Condé and Karl Beveridge. Their early practice eschewed artistic representation of the working class in favour of projects undertaken directly with labour unions and community-based organisations.

Generally, turns toward such collective, materially interventionist strategies in art can be closely associated with turns toward similar strategies in politics. Contemporary suspicion of representation is a response to the distant, unequal power relations that can arise between reformist, social democratic political entities and a passive, disempowered mass subject; or between artists, and the subjects of an artwork. Concerns over this imbalance propel autonomist-inflected prioritisations of aesthetic process over any final aesthetic object.

The five-day festival État d’Urgence (State of Emergency) was organised annually in Montreal by the art collective Socially Acceptable Terrorist Action (ATSA). The fifth chapter elaborates upon the festival, another instance of popular, participatory art for non-specialist audiences and one which focuses upon issues of homelessness. As Léger warns, though, community art has been ‘instrumentalized’ by the capitalist artworld (38). Concerns over reductionist left politics towards art are reiterated – in the ‘error, historically speaking, of revolutionary Marxists to constrain the exploration of aesthetic forms’ (47).

An evaluation of The Fall of Water (2006-7), by Condé and Beveridge, completes the chapter. The large, digitally produced image is based on Pieter Bruegel’s The Fall of the Rebel Angels (1562). Allegorical figures of the multitudes – indigenous women and South Asian activists, for example – battle against figures of multinational corporations, including Bechtel, which had been defeated earlier in the century in its attempts to privatise the water system in Cochabamba, Bolivia. A donor ultimately granted the work to the National School of Art in La Paz.

The Water Wars’ mass mobilisations were the base of progressive Evo Morales, who became President in early 2006; this goes unremarked by Léger. Nonetheless, the book’s theses imply integral relations between these three developments: the shift from Condé and Beveridge’s collective, community-based process, to an eminently representational strategy in The Fall of Water; the embrace of the artwork by state-sponsored institutions; and the shift from a left politics of the multitude, towards the vexing question of central state power. Léger’s theoretical orientation towards institutions makes more sense in terms of Bolivia and other countries on the socialist road. It makes less sense in terms of Canada and other capitalist states – and the art therein, such as ATSA’s.

Convergences featuring anarchist-inspired Black Bloc tactics targeted the 2010 Group of Eight meetings in Toronto. In the seventh chapter, Léger proposes that the Bloc should be assessed, not only in terms of its stated political goals and direct (in)efficacy in that regard, but also ‘aesthetically’ and as enabling a ‘subjective dreaming that alters the coordinates of the situation’ (136). This ‘dreaming’ intimates that the ‘aesthetic’ work of the Bloc has a more indirect and longer-term political impact – within the realm of ideas – than the immediate achievement of material demands by any given convergence.

Léger considers three works of performance art, including Jeremy Deller’s The Battle of Orgreave (2001), which are stamped with a ‘playful or perverse role-playing’ (130). Orgreave was broadcast on the BBC; re-enacted a key battle in the 1984-5 UK miners’ strike; and featured hundreds of local extras, including former miners and police officers involved in the original clashes. Léger raises concerns about the past, and thus limiting, nature of the primary events themselves; but recognises that publicly revisiting the strike is an unpredictable ‘”uncontainment”’ that could potentially facilitate overcoming this historic defeat for the working class (126).

A brief on the 2012 mass student strike in Québec constitutes the eighth chapter. As Léger recognises, it involved forces ranged from communists, to liberals, to identitarian movements. A red square – on, for example, armbands – was one symbol for this ‘Maple Spring’. Noting early Soviet artists, such as El Lissitzky, whose mobilising art used similar colour schemes and simplified geometry, Léger upholds the protesters’ chosen symbol. That symbol, first, is ‘associated with the power of organized structures’; and, second, is not ‘based on identity, but … on universal, emancipatory organization’ (143). The first point is hardly specific to his projected communist sequence; while anarchism can be conventionally opposed to such structure, other left tendencies are not. On the second point, the obvious question – which Léger does register – is how such a universalist understanding can be precipitously forced in the current period, given the heterogeneous empirical character of the actual struggle in Québec.

One possible answer is that the red square was an instance of ‘postmodern signs, avatars of a collective amnesia’ (140). This answer is dismissed by Léger, who denounces postmodernism throughout the book. However, he still approves Bruno Bosteels’s critique of radical historicism and contemporary politics of memory: when ‘everything is fodder for historicization and … capitalist ideology emphasizes difference, multiplicity and perpetual change, we should refuse to mourn [a] communism’ that ‘remains untimely’ (142-3). The discrediting of twentieth century communist movements and really-existing socialist states was underway long prior to the collapse of many of those parties and states post-1989. An amnesiac postmodernism which erases awareness of that long historical trajectory is thus hardly antithetical to, and can indeed enable, possibilities for popular engagement with the eternal, invariant communist idea posited by Léger.

That the red square was, instead, an instance of ‘Situationist détournement’ is Léger’s preferred answer (140). Détournement, however, is an interventionist redefinition of a sign and, so, more consciously grounded in that sign’s historical meanings, at least as compared to postmodernism. Such a grounding is potentially debilitating, given the problematic historical trajectory of twentieth century communism; a subtraction from this entire trajectory has been a strength of the communist idea as eternal and invariant.

The Maple Spring is this period’s most significant upsurge in North America. Though its red square should, thus, be a penultimate intersection of art and politics, Léger’s appraisal is marred by strains within his constellation of positions on postmodernism, the communist idea, and détournement. However, Léger’s approach is dialectical throughout the book, particularly regarding questions of art in capitalist versus socialist state institutions; and regarding art’s ability to ‘uncontain’ and stimulate a subjective dreaming. The Neoliberal Undead is a valuable contribution to dialogues around politics and aesthetics.