Marx & Philosophy Review of BooksReviews‘Theories of Ideology: The Powers of Alienation and Subjection’ reviewed by Michael Morris 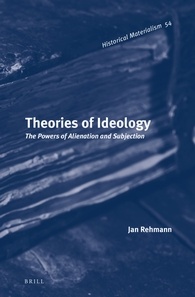 Jan Rehmann
Theories of Ideology: The Powers of Alienation and Subjection

Michael Morris is an assistant professor at the University of South Florida. He is currently …

In Theories of Ideology, Jan Rehmann presents the English reader with a lightly revised version of an earlier German monograph, his Einführung in die Ideologietheorie. Although Theories is not merely a translation, its minor revisions, additions, and subtractions do not render it a substantively new work. Those already familiar with the German monograph need not consult this new volume. However, for those who do not read German or who are otherwise unfamiliar with Rehmann’s work, this book provides a good overview of the historical development of various major accounts of ideology, one that bears some comparison with Terry Eagleton’s Ideology: An Introduction. While Eagleton’s book has a broader scope, Rehmann’s work displays at least as much philosophical sophistication, and through its lengthy historical discussions and overviews, it sustains a complex critical argument and defends Rehmann’s favored conception of ideology, which he variously designates as “ideology-theory” or “Projekt Ideolietheorie.” The later term refers specifically to a research project inaugurated in 1977 by W. F. Haug and associated with a group of scholars – including Rehmann – at the Free University in Berlin.

Taken in the broadest and most fruitful sense, Marx’s discussions of ideology focus on the intersection between social theory and epistemology. They thus consider the social origins and functions of ideas, but they also consider how social function and origin shape the cognitive status of beliefs. They consider ideas as the subtle weapons of class conflict, as instruments that internalize and facilitate oppression. But they also consider how matters of social origin and interest fundamentally constitute the very possibility of thought, thus yielding a socially and historically contextual, but nonetheless normative, account of rationality. While this complex intersection of social theory and epistemology may be fruitful, most theoreticians of ideology reject it as a case of rather elementary confusion. Thinkers closely wedded to the analytic philosophical tradition, such as Raymond Geuss and Michael Rosen, have insisted that questions of origin and function have no direct bearing on the truth or falsity of a belief. Surely, they argue, a belief or theory with deeply suspect origins or pernicious social consequences might still be true. By contrast, those with a more literary, continental, or practical orientation have often insisted that such questions of truth are simply misguided, naïve, or irrelevant.

Rehmann follows this general trend, arguing that, when it comes to ideology, we must reject the “traditional paradigm of a true-false dichotomy” in favor of a “distinction between domination and emancipatory agency”, that is, a distinction “between ideological ‘socialisation from above’ and dimensions of ‘horizontal socialisation’” (7). If, as Rehmann insists, our consideration of ideology principally aims to unmask semi-voluntary forms of submission, then questions of truth and falsity remain largely incidental. While this account accurately captures one strand of the complex discussions that surround the term “ideology”, Rehmann tends to assume that this account represents ideology tout court, the principle concern of all authors who address the topic. Accordingly, his criticisms of certain figures, including Lukács, Lenin, and Mannheim, have a somewhat tendentious character. For instance, if all ideology involves an oppressive “socialization from above”, as Rehmann holds, then Lenin’s insistence upon the existence of proletarian ideology does in fact become a troubling harbinger of the state oppression to come. However, if, as seems evident, Lenin simply employs the term “ideology” to designate something like the worldview or theory that emerges from the social vocation of the proletariat, then Rehmann’s criticism has no force.

Rehmann’s criticisms of Lukács reveal a similar misconception. If Lukács’s History and Class Consciousness principally sought to explain “the defeat of the socialist revolution in the West after the First World War” (80); if, in other words, this book principally sought to explain the forces that distract, divide, and pacify the working class, then Rehmann would be right to criticize Lukács for his singular emphasis upon consciousness, for his reduction of “ideology-critique” to a form of “intellectual enlightenment” (82). In opposition to this exclusive emphasis upon consciousness, upon the realm of thought, Rehmann’s proposed ideology-theory follows Gramsci and Althusser in noting the significant role that “hegemonic apparatuses”, “rituals”, “ideological practices” and forms of organization play in the ideological pacification of the working class. According to Rehmann, therefore, ideology should not simply focus on the subtle but oppressive function of beliefs or ideas. Instead, in its attempt to liberate the working class, it should consider the hegemonic functions of the most varied customs, institutions, and practices.

While Rehmann may be correct to criticize Lukács’s highly intellectualistic or rationalist conception of class struggle, there is still an important sense in which his argument simply misconstrues the principal and highly sophisticated epistemological concerns that guide Lukács’s book. In short, Lukács seeks to show how the social position of a class either hinders or facilitates its capacity to cognize social reality as a whole. For Lukács, “false-consciousness” has nothing to do with the vulgar beliefs or trivial errors of the more benighted segments of the oppressed. Instead, the term “false-consciousness” designates the most sophisticated economic and political theories of the bourgeoisie, insofar as these theories remain distorted by the practices or social aims that inform them. Most importantly, Lukács does not hold that practices and social aims always tend to distort knowledge. Instead, particularly in the case of the proletariat, he suggests that practices and social aims constitute both the object of knowledge and the possibility of theoretical cognition. In other words, Lukács’s book principally develops a sophisticated social epistemology, one that emphasizes the inherently social and contextual nature of rationality.

In contrast to his treatment of Lenin, Lukács, and Mannheim, Rehmann’s criticisms of Horkheimer, Adorno, and Althusser prove more persuasive, given that these authors more closely share Rehmann’s conception of ideology as a particular form of social control. In his discussion of these authors, Rehmann rightly warns against the dangers of a monolithic and/or totalizing conception of ideology. Rehmann persuasively argues that the instruments of voluntary servitude always involve elements with disparate origins and implications. He aptly documents how ideology generally appropriates aspirations and impulses of liberation. It co-opts them, distorts them, and makes them serve an ulterior purpose. In order to attract and pacify the oppressed, ideology continuously appropriates the spontaneous or “horizontal” developments that emerge from among the oppressed. Accordingly, our critique of ideology can never simply reject ideology as the mere instrument of oppression. If we do so, we only further alienate the oppressed through our straightforward rejection of their cherished – and partially genuine – aspirations, customs, and self-conceptions. Instead of rejecting ideology as a monolithic and simply oppressive construct, we must seek to re-appropriate the emancipatory impulses and tendencies within it. This represents the most important lesson to be learned from Rehmann’s book.

Along these lines, Rehmann criticizes Horkheimer’s and Adorno’s conceptions of the culture industry and reason as examples of a monolithic and strictly top-down conception of ideology. If reason is inherently ideological, and if modern culture is a monolithic and strictly top-down affair, then we must succumb to fatalism, even nihilism. If all thought and socialization is irredeemably ideological, then there is nothing left to liberate. Oppression and invasive power go all the way down to the core of our firmest ideals and our most intimate selves, leaving us nothing to emancipate or endorse. Rehmann levels the same charge against Althusser, who ultimately equates ideology with all forms of socialization or subject formation.

In response to these monolithic and totalizing conceptions of ideology, Rehmann introduces a distinction between “vertical” and “horizontal” socialization. While these terms surely gesture towards the kind of distinction we must maintain, and while they may be sufficient for some cases of practical engagement, they ultimately remain underdeveloped. The idea of “vertical socialization” suggests a layer of formation where asymmetries of power and/or differences of interest do not play a significant role. If we assume that the working class has some profound and overriding unity of interest and identity, then this vision might work. However, if we take a more fine-grained view of the way that differences and power-relations appear to insinuate themselves into the most diversified relations, including those between men and women, between different ethnicities, between parents and children, between different cultural or sexual ways of life, then it may be hard to ignore the persistent differences and asymmetries in power that seem to shape all human relations. Let me be clear: I accept Rehmann’s insistence upon the existence of something like vertical socialization as a necessary precondition for meaningful liberation, but I do not think he has done enough to identify and defend the exact nature of some genuinely – or even approximately – vertical stratum.