Marx & Philosophy Review of BooksReviews‘Aisthesis: Scenes from the Aesthetic Regime of Art’ reviewed by Calum Watt 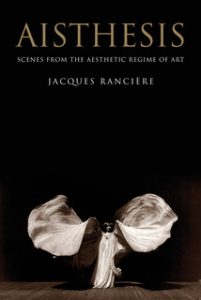 Jacques Rancière
Aisthesis: Scenes from the Aesthetic Regime of Art

Aisthesis is the most ambitious work to date of Jacques Rancière, one of the most important French philosophers working today. It represents both a fresh work from a structuralist tradition going back to the 1960s, as well as unashamedly a work in the manner of classical aesthetics, engaging throughout with Hegel and high European art. Rancière’s work has been celebrated for reinvigorating aesthetics, and for marrying it to a progressive politics, and Aisthesis is said to represent the culmination of fifteen years’ work.

Rancière’s book takes as its loose model Erich Auerbach’s classic work of literary criticism, Mimesis: The Representation of Reality in Western Literature (1946). This is most clearly the case in the work’s structural organization by ‘scenes’, which is to say that each of the fourteen chapters begins with a quotation relating to a seminal moment in the history of the conceptualization of art over the last 200 years. Rancière’s choice of scenes, like his references in general, is impressively wide-ranging and non-canonical by design, but unlike Auerbach’s is not restricted to literature. He moves from a discussion by Hegel (1828) on Baroque Spanish painting to a contemporary review by Mallarmé (1893) of Loïe Fuller’s dance, from Rilke’s study (1902) of the sculptures of Rodin to James Agee’s Let Us Now Praise Famous Men (1941). One of the essential arguments of Rancière’s work is that ‘Art as a notion designating a form of specific experience has only existed in the West since the end of the eighteenth century’ (ix). This is to say that, despite histories of art going back to Lascaux, the very idea of a capitalized ‘Art’ is historically situated and is essentially based on the ‘sensible fabric of experience’ (x), that experience being both the relation the viewer has with the art object and the condition of its production. Rancière’s book can therefore open with a discussion of the ancient Belvedere Torso, but it is Johann Joachim Winckelmann’s 1764 response to it that is the real subject of investigation – an aesthetic appreciation of the mutilated statue in its surfaces, in its pure form and lack of classical form (symmetries and harmonious proportions) and expressivity. This conception makes up what Rancière refers to in his subtitle as the ‘aesthetic regime of art’.

It is in this way that the aesthetic regime is opposed to, and was born out of, a break with the older representative regime; the terms mimesis and aisthesis are ‘regimes of the identification of art’ (xi). While the representative regime can be relatively easily intuited – as essentially based on depicted characters and drama – the nature of the aesthetic regime is inherently more intangible. Effectively what Rancière is talking about is the moment when the subject of a work of art disappears into its form. This is why a recurring analogy in the book is with music – one might be reminded of Walter Pater’s famous dictum that all art aspires to the condition of music. We might however more accurately say that the meaning of the aesthetic regime seems to consist in the indistinction of the arts, that the arts work to abstract from themselves. Rancière writes in the chapter on Loïe Fuller that the arts of the aesthetic regime consist in a ‘pure display of forms’, abstract insofar as ‘they tell no stories’ (100). So far the notion of the two regimes is clear enough. But he continues that ‘if they get rid of stories, they do so in order to serve a higher mimesis: through artifice they reinvent the very forms in which sensible events are given to us and assembled to constitute a world’ (100). He concludes that, in this way, ‘[t]he body abstracts from itself, it dissimulates its own form in the display of veils sketching flight rather than the bird, the swirling rather than the wave, the bloom rather than the flower. What is imitated, in each thing, is the event of its apparition’ (100). Just as the notion of regimes owes something to Foucault, so these abstracted apparitions bear some relation to Deleuzean affects. Yet this is also illustrative of a certain dialectic at work in the book, in which art is always constituted by both its material and symbolic substance. Rancière appropriates the old-fashioned notion of symbolism, here standing for the suppression of difference between symbolic and direct expression (101), and it is also in this way that Rancière can casually redefine paradigmatic terms: earlier we read that ‘[m]aterialism is the dualism that separates the material from the spiritual by separating particular things from the life of the whole’ (57).

Rancière conceives of this both as a form of freedom from, and indifference to, represented content. Where previously there were rules as to what could be the subject of art (mythical and religious themes for example), now ‘Art exists as a separate world since anything whatsoever can belong to it’ (x). This has the important consequence that everyday life can be a subject for art. This is one way in which we can see borne out the longstanding emphasis in Rancière’s work on egalitarianism – a student of Althusser, he broke with him over the latter’s dismissal of those involved in the events of May 1968. Particularly fascinating is that this is pursued through the notions of inertia or idleness in art. This is brought out first in Hegel’s reading of idling boys in the paintings of Murillo, then in Maeterlinck’s notion, discussing Ibsen, of a theatre of ‘immobile life’ (111), as well as in the examination of Stendhal’s Red and Black (1830), which Rancière concludes by saying that ‘the plebeian’s happiness’ consists in ‘doing nothing, in annulling hic et nunc the barriers of social hierarchy and the torment of confronting them, in the equality of pure sensation, in the uncalculated sharing of the sensible moment’ (52). Plot, and therefore social hierarchy, can be abolished in this ‘sensible moment’, and given its significance I would have liked Rancière to write more on this aesthetic temporality. The reverie and feeling of timelessness that can attend art has been called many other things (one thinks, for instance, of the analyses of Benjamin and Heidegger), and although Rancière is conscious that he opens himself to a charge of aesthetic utopianism, he could do more to support his large, underlying claim that ‘[s]ocial revolution is the daughter of aesthetic revolution’ (xvi). If the ‘equality of pure sensation’ found in this moment of experience is essentially metaphorical for a notion of an ideal community to come, as it seems to me it is, then the question remains as to what happens when the moment of reverie ends.

An answer to this is perhaps alluded to most clearly in the related ideas running through the book of artisanal art and mechanical art. It is no surprise to find that Rancière rues the writings of John Ruskin as ‘somewhat forgotten today’ (137), for some of Rancière’s most illuminating analyses show how art only becomes art when it negates functional purpose, just as the Ruskinian Gothic in architecture can be seen as ‘responding to a vital double function: habitation and expression’ (142), the expression being crucially the expression of the life of a people. This is paralleled when, in the discussion of the photography of Stieglitz, we read the succinct formulation: ‘[a]rt begins where technics ends’ (214). So photography becomes art not in the technical reproduction of what can be seen, but in transcribing vision, in ‘the privilege of the gaze over the hand’ (219). One could say that these extraordinarily perceptive connections between apparently disparate arts amount to a conception of art as negating its materiality and utilitarian function in order to attain an immaterial vision of life, a life not of work but of sensation; perhaps one could go as far as to say that art is the love of a work that loves worklessness, which might be the meaning of a capitalized ‘Life’ (163). If I say that the relation between this and social revolution remains to be demonstrated, it is because I wonder what exactly is posited by such moments of evanescence, especially as they punctuate the book with futural flourishes at the ends of chapters. Rancière’s work is not teleological, and perhaps this is to seek an end when one is not meant. But perhaps this is one aspect of what Rancière means when he says the book is ‘open to future development’ (xiii).

This is an important work that will be of interest to anyone studying the politics of aesthetics or modernism. Students of Rancière’s other work will also find that the later chapters on Vertov and Chaplin are consonant with his recent books on cinema, and make for an illuminating comparison with them. Credit is due to the translator, Zakir Paul, for rendering so well Rancière’s finely wrought prose; he has also recently published a translation of Maurice Blanchot’s Political Writings, and is clearly a translator to follow.