Marx & Philosophy Review of BooksReviews‘Racecraft: The Soul of Inequality in American Life’ reviewed by Guy Lancaster 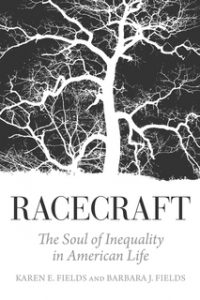 Dr. Guy Lancaster is the author, co-author and editor of several books on racial violence, most …

It remains a fact not widely disseminated in American history textbooks that among the slaves in the antebellum period were numerous white men and women. Certainly, recent studies have demonstrated that the indentured servitude practiced in Virginia constituted slavery in all but name, with plantation owners buying and selling or gambling away their white, European property on a regular basis. However, up until the Civil War, there were many phenotypically white persons held in bondage under the fiction of hypodescent, or the one-drop rule. In 1857, Abby Guy sued for her freedom from planter William Daniel in Arkansas, claiming, in one version of her story, that her impoverished mother had been kidnapped by slave traders (her unknown father may well have been William Daniel’s own sire). That same year, the blond-haired, blue-eyed Jane Morrison filed for her freedom in Louisiana, claiming that she was white and had been illegally sold into slavery. Such cases attracted national media attention because they broadcasted the very real possibility that whites—poor whites, that is—could well be dragged the wrong way across a supposedly inviolable color line. Many commentators upon America’s multiform racial neuroses have, on the basis of such evidence, dubbed whiteness a fantasy dependent upon a purity of bloodline that can never be proven, but this misses an important point. Yes, the victims of white slavery had no real way to prove their absolute “racial purity,” but neither could the capitalist planters who purchased such slaves prove their ostensible impurity; moreover, they did not care—indeed, many favored lighter slaves, the whiter the better. Race was just a convenient fiction for maintaining a system of bondage, and planters’ purchasing preferences suggests perhaps a desire that larger swathes of society (especially intimate relations) could be subject to this practice of absolute rule.

As Goethe’s Faust knew, in the beginning was not the Word, but the Deed. In the beginning was not race, the convenient label, but rather the crime of trying to dominate one’s fellow human beings. This is the theme of siblings Karen E. Fields and Barbara J. Fields’s enlightening book, Racecraft, a collection of material the two authors have published or presented from 1989 to 2003, combined with new material specific to this book to produce a behind-the-scenes look at how the very concept of race helps to obscure the reality of inequality in America, stripping the lower classes of the language they need to gauge and correct their situation. The neologism of the title deliberately evokes the term “witchcraft” to describe the process by which the social practice of racism, “something an aggressor does,” is transformed into race, “something the target is” (17). That is, the action of racism creates the evidence for the imaginary construct of race. For example, American history teachers have often told their students that black people were enslaved because of their race, as though slavery were dependent upon the phenotype of the victims rather than the profits desired by the perpetrators, “as though the chief business of slavery were the production of white supremacy rather than the production of cotton, sugar, and tobacco” (117). In fact, slavery did not rely upon blackness but instead created it, so that even the whitest person held in bondage was ascribed some measure of “negro blood” by virtue of her state. The fact that we miss this and so many other obvious tricks is, Fields and Fields would argue, racecraft at work: “Disguised as race, racism becomes something Afro-Americans are, rather than something racists do” (96–98).

The authors open with a “tour of racecraft,” highlighting several recent cases in which racism was covered over with the brush of racial identity, as with a 2006 New York Times report on a scientific study into asthma that linked heavy traffic and poor housing to high asthma rates before adding that blacks and Hispanics typically had higher-than-average rates of the condition; in this case, racecraft “permitted the consequence under investigation to masquerade among the causes. Susceptibility to filthy air does not depend on the census category to which the asthma sufferer belongs” (41). This is followed up with a selection of individual stories that highlight the shared past of all Americans, illustrating that Jim Crow–type segregation and the so-called “racial divide” obscured the reality of racial interconnection. In fact, Jim Crow was not simply a means of ostensibly separating black and white but rather “imposed relations of dominance and subordination among Euro-Americans, not just between Afro-Americans and Euro-Americans,” with the white upper class outranking other whites “precisely because it was in a position to oppress and exploit black people” (84). Because the Word is made real by the Deed, so to speak, attempts to ameliorate racism that depend upon maintaining the structure of race are doomed to fail; particularly welcome is the authors’ impeachment of the current pedagogical regime of tolerance as anti-democratic in essence: “A teacher identifies for the children’s benefit characteristics (ancestry, appearance, sexual orientation, and the like) that count as disqualifications from full and equal membership in human society” and instructs children to overlook such characteristics, thus basing “equal rights on benevolent patronization rather than democratic first principles” (105). Likewise do the Fields sisters indict the campaign for the recognition of multiracial identities as one constituting more an attempt to avoid the stigma attached to folks of “pure” non-white backgrounds than it does an expansion of human rights to a greater number of people.

One of the more interesting chapters tackles how the experience of slavery—and its popular representation—has shaped ideology in the United States. The authors work hard to tackle much of the loose thinking that has surrounded this subject, such as the notion that the U.S. Constitution declared slaves to constitute three-fifths a person rather than using three-fifths of the slave population to give slave states an advantage in congressional representation. Slavery helped to create the concept of race: “A commonplace that few stop to examine holds that people are more readily oppressed when they are already perceived as inferior by nature. The reverse is more to the point. People are more readily perceived as inferior by nature when they are already seen as oppressed” (128). One of the consequences of slavery is that a “thorough, consistent, and honest political conservatism” failed to develop in the United States on account of the Southern slave society’s “need to humor the democratic aspirations of a propertied, enfranchised, and armed white majority,” leaving the only defense of institutionalized inequality “a bastard free-market liberalism, with racial, ethnic, or sexual determinism tacked on as an inconsistent afterthought” (145–146).

In his 2013 book Race: A Philosophical Introduction (2nd edition, reviewed here in July 2013), philosopher Charles Taylor asserts that racial thinking only leads to atrocities when it combines with anti-democratic principles or the pursuit of profit. But the question that Fields and Fields would ask is: when does it not? In theory, there could exist racial thinking in isolation of exploitation. As political scientist Henry E. Hale pointed out in The Foundations of Ethnic Politics: Separatism of States and Nations in Eurasia and the World (2008), the concept of ethnicity is a cognitive mechanism for reducing the uncertainty that individuals face in the social world—it is psychologically comforting to have rules of thumb for what to expect from certain groups of people, even if those assumptions might be flawed. Even pre-modern peoples developed stereotypes about other tribes and nations, as evidenced by Classical Greek attitudes toward “corrupt” or “servile” Asians. However, even in these early days, such projected attributes served imperial projects, justifying conquest and domination, so perhaps the Fieldses are correct in their assertion that one cannot have race without racism. In making this point again and again, they happily trample upon many of the commonplaces in modern academe, from the “near totemic” focus upon the agency of subaltern peoples (as if the creation of black churches or self-aid groups could compensate them for the absence of freedom in the larger world) to the ascription of rationality to practices once described by Western observers as barbaric and backwards. The authors draw from anthropologist E. E. Evans-Pritchard’s groundbreaking study on witchcraft in Africa to compare divergent approaches to invisible ontologies, insisting that the scholarly practice of suspending moral judgment regarding a belief, such as either witchcraft or racecraft, which the rational observer can know to be false only serves to “blunt the intellectual tools with which we most readily condemn it as immoral: It is false, and once one has seen the evidence of its falsity, continuing to act on the basis of it moves one from a cognitive problem to a moral one” (220).

Being primarily a collection of previously published material not edited for cohesion makes this, at times, an uneven book, prone to a bit of repetition as well as digressions; for example, Karen Fields’s chapter recounting oral history work with her grandmother proves evocative but only tangentially related to the central theme. However, the Fieldses have managed to write the sort of scholarly volume that stands a real chance of capturing a larger audience, never sacrificing clarity in their work. Moreover, the authors consistently relate theory back to practical application, their intent being to draw back the veil and demonstrate how the operations of racial ideology impact everyday life even beyond the realms of white and black, as with their observation that “because racism shares a nervous system with inequality in general, the same inclination to shun identification with black Americans makes it impossible for [President Barack Obama] to identify with modest wage and salary-earners, the unemployed, and the working or disabled poor of all ancestries,” precisely because the public language used to evoke the working poor is, under the magic of racecraft, inextricable from racial matters, so that attempts to alleviate the plight of the poor are seen as handouts to unworthy minorities (282). Racecraft is a revelatory volume that challenges basic assumptions about race and inequality, uncovering the deeper architecture of economic exploitation, and thus it sheds light upon what will be necessarily for true liberation from the twin crimes of racism and race.