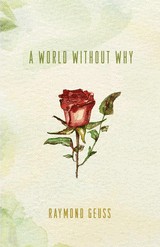 Raymond Geuss
A World without Why

In A World Without Why, Raymond Geuss brings his caustic intelligence to many of themes and figures that have occupied his career: the importance of history for ethical and political thought, the failure of liberalism, illusion and ideology, the pernicious legacy of Kant and his heirs and the centrality of Hegel, Marx, Nietzsche, Adorno, and Bernard Williams for critical ethics. These essays range widely from meditations on passages by Cicero and Pindar to examinations of political authority, lying, the purpose of criticism, the possibility of theological ethics, and the politics of architecture. What unites them is a preoccupation with possibility and place of the Left in a world of instability, insecurity, and uncertainty (149) and the need for an adequate methodology in ethics and political philosophy.

“Marxism and the Ethos of Twentieth Century” offers a candid treatment of many of Geuss’s ethical and political themes. Written for a volume of essays in the honor of Alasdair MacIntyre (O’Rouke 2013), Geuss follows much of MacIntyre’s diagnosis of the failure of the enlightenment project, but parts ways by finding no solace in Aristotle and Aquinas (64-5). The legacy of Nietzsche’s nihilism entails the rejection of a universal moral philosophy with transsubjective authority (45). A feasible universal moral philosophy would require a universal world view that is “relevant to everyone” and “would have to be a world view that gave people orientation towards all the important features of human life” (48). Religion no longer offers this sort of world view and liberalism falls short as a universal philosophy because of its complicity with laissez-faire capitalism, its isolated individualism, and its destructive effect on forms of collective life (52).

Marxism promised a concrete vision of “full employment, economic stability, and full social welfare and security for all” (53) and proposed to achieve this vision through the abolition of the private ownership of the means of production. Perhaps most importantly, it promised to end alienation in which people do not fully control their own powers, particularly those necessary for the “production and reproduction of our form of life” (54). On Geuss’s account, the self-proclaimed Marxist regimes successfully provided economic security, but nonetheless failed. They failed not simply because they were oppressive or because they replaced capitalist alienation with alienation caused by the state appropriation people’s powers. Rather, real socialist regimes lacked an alternative ethos to the West’s ideology of “more or less unreflective consumption” (46). Real socialist societies could not match capitalist levels of consumption. Geuss connects this failure to a strand of Marx’s thought that finds human freedom in production in a way that parallels capitalist ideology’s emphasis on consumption (56-9). This ideology of production contributed to these regimes implementing a cycle of “need-production-consumption” in part because they “could give no plausible answer to the question of why production for its own sake was an end-in-itself and had no genuinely alternative value-system, or mode of self-congratulation, to propose” (62).

How should the Left respond to this diagnosis? Geuss suggests that the Left has offered two sorts of diagnoses and solutions. A more traditional Marxist account in which the basic economic structures are the source of malaise offered the hope that reforming or revolutionizing the relations of production could transform society and end alienation. People in control of their productive powers would not succumb to the Sisyphean cycle of production for its own sake. The early Frankfurt School’s more pessimistically assigned responsibility to the structure of rationality inherited from the Enlightenment. This second diagnosis threatens to deprive the Left of the very tools needed for criticism.

Geuss is skeptical that the Left has moved much beyond Adorno and locates much of the blame in the norms of rationality, the dominant academic idealizations in political philosophy, and the political discourse of liberalism and human rights. Geuss describes his professional environment as

a conformist, claustrophobic, and repressive verbal universe, a penitential domain of reason-mongering in which hyperactivity in detail – the endlessly repeated shouts of “why,” the rebuttals, call for “evidence,” qualifications and quibbles – stands in stark contrast to the immobility and self-referentiality of the structure as a whole (232).

Geuss’s complaint about his professional environment as a purely verbal universe of argument for its own sake that leaves “the structure as a whole” untouched is connected to a broader diagnosis of intellectual complicity in the status quo. The “endless repeated shouts of ‘why’” and the demand for clarity mask, legitimize, and reify oppressive structures. This is why he advocates realism in politics and rages against “moralistic” approaches in political philosophy that reduce politics to applied ethics. Geuss’s realism does not abstain from normative evaluation, but rather insists that it be historically informed, be alive to context and power relations, and be vigilant to how words and concepts disguise interests (143). In “A Note on Lying,” Geuss observes that the modern political danger is not the explicit lies of government:

Political manipulation nowadays is more likely to be a subtle blend of keeping the pieces of a puzzle apart so they do not cohere, deemphasizing some things that are important, diverting attention to other things, deniably suggesting connections that do not exist, distracting people’s attention, wishful thinking in the evaluation of evidence, and so forth. (142)

Academics who treat political philosophy as applied ethics take part in this manipulation. Geuss insists that even the style of analytic political philosophy and its demand for clarity “can be seen as a requirement of conformity to structures of repression” (41) and the demand for constructive criticism “in general functions as a repressive attempt to shift the onus probandi and divert attention from the possibility of radical criticism” (90). In a reflection on Cicero’s complaint of Thucydides’ obscurity, he questions “this assumption and considers whether there are contexts and occasions in which and on which obscurity is not a deficiency, even a deficiency that might be pardonable or unavoidable, but something with positive value” (22). No doubt these barbs will continue to frustrate those who expect Geuss to fortify his criticisms with a systematic realist theory that mirrors the ethics-first approach, but it is not clear that Geuss should be expected to offer an alternative given his diagnosis of Zeitgeist and his insistence on historicism, contextualism, and critical theory. For Geuss, philosophers’ mistaken vision of the world as a moral cosmos (206) offers “a kind of comedy without the humor” (207). In contrast, we should recognize that “Human forms of valuation have neither consistency, coherence, nor any particular purchase on reality” (217). Geuss thinks that we do not have a realistic idea of how we might fundamentally change the world and that “this situation of enforced immobility” will only be overcome once “the operation of various long-term processes will soon make most of the people in the world significantly worse off than they now are” (194).

How then should we proceed to think about ethics and politics? Geuss considers and dismisses the option of working within the dominant intellectual tradition and rejects evading it through action. Instead, he leaves us with “the invitation, in particular one to observe, look at, or consider something” (234). Geuss does not confront his critics, but rather seeks to undermine and evade them. He takes radical social criticism to be largely rooted in the imagination and his frequent recourse to classical and literary sources aims to mobilize our imaginative powers.

For example, “Goals, Origins and Disciplines” frames a discussion on the classification of academic subjects – particularly philosophy and the humanities – around Wilhelm Windelband’s 1894 address as rector of the University of Straßburg. Geuss develops the topic with musings on Homer, Plato, Kant, Hegel, Marx, Nietzsche, and Foucault (among others) as well as a foray into the Roman inclusion of music in the curriculum for architects (architects were expected to serve as military engineers and had to determine the tension of ropes by their pitch when plucked) (18). These reflections illustrate the idiosyncrasy and arbitrariness of our disciplinary conventions and open the ground for new categorizations. Similarly, in “Authority: Some Fables,” he analyzes the meaning and use of authority from Roman times to the present to expose the contingency and strangeness of central political concepts. These genealogical essays are illuminating and contain many ideas to ponder, but do little in terms of constructive criticism (this is an observation, not a criticism).

In “The Loss of Meaning on the Left,” Geuss sees some possibility of resistance in art and philosophy. Art allows us to “articulate negatively what a meaningful life would look like” (108). Modern art also provides insight into reality because it “shows that we can still experience the horrors of the modern world as horrors, and thus still have the capacity to experience the modern world as it ‘really is,’ which in turn means we have retained the possibility of some grasp on a more satisfactory form of life” (109). In philosophy, Adorno’s negative dialects allow us to contrast the “image society projects with the reality” (110). This promise of art and critical theory is modest and tentative, offering only a “bitter happiness” of cognition (110).

Geuss’s philosophy is primarily critical, not constructive, but this is hardly a defect in the absence of an intellectually defensible alternative. Geuss is deeply pessimistic of the viability of historical models for our times or of the success of contemporary thinkers in offering alternatives that survive scrutiny. Nor does he think that it is sufficient to offer an intellectual vision: any vision must be “part of a successful project of action to transform society” (66). Here he follows Marx in insisting on the unity of theory and action. How might this be accomplished? Geuss doesn’t know, but he provides some hints in “Marxism and the Ethos of the Twentieth Century” where he takes Marxism’s deepest intuition to be “that humanity should be capable of collectively self-organizing activity … without needing to appeal to any external principle” (66). To move beyond the ethos of the twentieth century, Geuss insists that we need to abolish the sharp distinction between means and ends, something he sees as advocated consistently by Hegel, Adorno, and Dewey and at times by Marx and Trotsky (65). There is much to be said for this approach in which people jointly construct their lives and environment, rather than having them imposed upon them. Nonetheless, Geuss only gestures at how this might occur, leaving the reader with an invitation to reassess our concepts and institutions but with only a vague idea of what a world without why would be.