Marx & Philosophy Review of BooksReviews‘Out of Time: The Pleasures and Perils of Ageing’ reviewed by Malise Rosbech 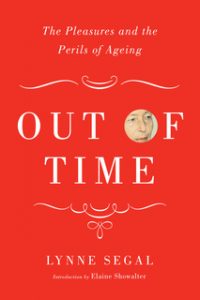 Lynne Segal
Out of Time: The Pleasures and Perils of Ageing

Malise Rosbech is a post-graduate in Philosophy and Critical Theory. She studied at the CRMEP …

As a professor in psychology and gender studies at a London University, socialist feminist Lynne Segal has extensively researched and argued for the ‘contradiction at the heart of desire’ in relation to a range of controversial issues such as pornography and communal living arrangements. In her new book Out of Time, Segal continues to examine this contradiction, however this time with regard to an otherwise neglected subject in left politics, that of ageing. With compassion and insight she examines the contradiction of desire in relation to age and sex, desire, politics and happiness. Although Out of Time is written from a socialist-feminist perspective, it is in no way confined to either speaking about women or socialist politics, rather, it is an honest and at times rather personal encounter with the subject of ageing through a critical engagement with literature, social psychology, philosophy and psychoanalysis. In fact, Segal spends just as much time examining the ideas of Jacques Derrida, John Berger and the late Stuart Hall, as she spends on Simone de Beauvoir, Adrienne Rich and Grace Paley.

In Out of Time Segal critically engages with the media attacks in recent years on the sixty-plus generation from across the political spectrum. In 2006 Bredan O’Neill, associated with the Trotskyist LM Magazine (LM short for Living Marxism), accused the older generation for most modern-day ills ranging from ‘rising debt to environmental woes’ (46). Since then various national newspapers have published similar articles featuring headlines such as ‘Blame the baby-boomers, not the bankers’ and ‘The pinch: How the baby-boomers took their children’s future – and why they should give it back’, claiming that people in their fifties and beyond grew up in a era of economic prosperity with free education overspending and consuming ‘more than necessary’. The presumption is that financial debt is not intrinsic to the economic system; rather, it is caused by reckless personal and political decision-making.

A lot has been said by the radical left already about the rise of racism, sexism, xenophobia and other forms of structural oppression in the midst of an economical downturn and Segal does acknowledge a relation between the economy and ageism. However, what is significant to her argument is that the recent generational warfare is particular in the way in which the dissident voices of the radical left of the 60s are held responsible for the victory of the right and in turn de-radicalised. Segal relates this phenomenon to the rise of neoliberalism, morally conservative Thatcherism, and the reification of unregulated markets. Remembering the lives of a variety of political activists from her youth, Segal points out that a vast majority of the so called ‘baby-boom’ generation have not benefitted from the upsurge of unregulated markets and economic prosperity the way the media wants us to believe. In fact, Segal rightly points out, amongst those living in poverty in the UK, 20% are pensioners. This is not a surprise: some of those hit hardest by the current austerity measures are older people. For example the NHS cost cutting has disproportionality impacted the elderly seeing more than half of hospital beds gone in 2011. The recession has had a particularly devastating effect on men over 55 whose suicide rate has risen by 12% over the last decade.

One would perhaps expect to find a more materialist examination of the discrimination and oppression of the elderly. This has been researched and written about extensively by Socialist and Marxist Feminists engaging in the domestic labour debate. Older people have always been an ‘issue’ in capitalist society both because they are regarded as no longer productive and therefore not direct contributors to the economy, and because of the general devaluation of reproductive work of which, of course, eldercare is a part. It would have been interesting to link just some of the issues Segal puts forward to a wider discourse on production and labour power especially in conjunction with her brief critique of neoliberalism and the wider conservative Thatcherism. When Segal criticises the cultural idea that we can only be truly happy when we are productive she touches upon some of these themes, however, she never really provides us with a full materialist understanding of why it is that elders are ostracised and oppressed.

Out of Time is somewhat of an existential and ethical reflection for the layperson offering a more positive outlook of hope and resistance as we grow old. Asking the ancient philosophical question ‘how should one live’, the main argument of the book is that radical political engagement can contribute to a feeling of a meaningful life and help us acknowledge the value of mutual dependence. Rather than fighting ageism with anger and bitterness, Segal suggests that we look towards pioneers of age studies such as Kathleen Woodward, Sylvia Hennenberg and Cynthia Rich who seek to challenge the way in which ‘old age’ is understood and portrayed. Segal reminds us that although the popular image of the politics of ‘the old’ is a move to the right, many people hold on to their left radical politics till the very end and even become more revolutionary as time passes. Grace Paley and Rosalind Baxandall, in particular, speak of the satisfactions of continued political engagement and activism.

It is clear throughout Out of Time that writer and philosopher Simone de Beauvoir serves as a great inspiration for Segal, and it is perhaps through her work in particular that Segal is able to express some of the real contradictions of ageing. Segal talks about the anguish and fear she shares with majority of people about growing old, however, it is also in Beauvoir she finds hope and a form of political resistance as she quotes: ‘We must stop cheating: the whole meaning of our life is in question … let us recognize ourselves in this old man or that old woman’ (9). According to Segal, resistance is not to deny age as such nor is it a celebration of it, rather, it is an affirmation of old age and the dependency that follows as a significant part of life. And this affirmation is not limited to the elderly. In fact, Segal argues, by acknowledging the value of mutual dependence as a human condition it might help us question the neoliberal obsession with independence at the centre of modern society. It is also this affirmation that leads Segal to more philosophical take on old age in relation to time. What really matters is not biology, not sociology, she argues, but rather the self, or the multiplicity of selves, and its relation to the other. As the unconscious lacks both temporality and spatiality, ageing is not a linear process. Rather, drawing on the philosophy of Walter Benjamin, Segal argues that memory is an ever-changing repertoire of possibilities rather than a chronological registration of events.

Segal’s work has continuously advocated alliances rather than separations between the political vectors such as sex and sexuality, and Out of Time is no exception. Speaking to and about both men and women, young and old, this book should be read by anyone who wants to ask questions about the more ontological and ethical questions on ageing. Out of Time reminds us in a positive way that life does not exist in a vacuum but is rather a relation of dependence and that we must not stop asking questions about how we live as we age. It is not a ground breaking radical philosophical or political thesis on the concept of ageing, but it does offer an interesting and refreshingly positive way of understanding and experiencing the process of ageing; one that can serve as a form of political resistance. It is most definitely a good and enlightening read.