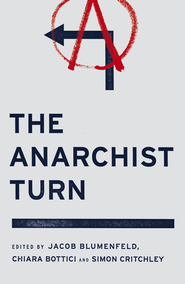 The Anarchist Turn collects fourteen papers from the conference of the same name organised by Jacob Blumenfeld, Chiara Bottici and Simon Critchley at the New School for Social Research in 2011. The title speaks of the perceived shift towards anarchism as the backdrop of radical politics in recent years. As Andrej Grubačić puts it:

[A]narchism, at least in Europe and the Americas, has by now taken the place Marxism once occupied in the social movements of the 1960s. As a core revolutionary ideology, it is the source of ideas and inspiration, and even those who do not consider themselves anarchists feel they have to define themselves in relation to it. (198)

Grubačić writes of the 1870-1917 period in the Balkans as a neglected anarchist moment in the official Yugoslavian history of the left and questions whether the ‘new anarchists’ might make the contemporary period ‘the second anarchist moment?’(195-8) Blumenfeld writes somewhat similarly with a more narrowly contemporary emphasis that ‘[i]n May 2011, arguing for an “anarchist turn” in the United States was something of a scandal. A year later it is already banal. This radical shift can be explained with reference to one verb: Occupy.’(238) So with a whiff of anarchism in the air it might be a good time to turn to a philosophical, feminist, geographical and political consideration of anarchism or at least to continue mulling things over from these perspectives.

The collection is published amidst some controversy. Duane Rousselle, an editor of Anarchist Developments in Cultural Studies, asserts that he was frozen out of the project after devoting months of work to editing the materials and securing the original contract for publication from Pluto Press (Rousselle 2013). This failure to acknowledge contributed labour is at odds with Critchley’s assertion in his brief Introduction that ‘[c]ollaboration, or working together, is the key here. It is the very ethos of the anarchism that we intend to both discuss and try to enact with this conference.’(1) The scandal seems to suggest that anarchism will remain easier to discuss than it is to enact in a university system riddled with hierarchy where exploitation has been widely normalised at a number of levels.

A major philosophical concern of the book as a whole is to subvert the boundaries between individuals and to rethink the possibilities for egalitarian political community. Bottici approaches this problem by accepting the Marxian critique of Stirner’s egoism and putting forward the interesting thesis that Bakunin’s concept of freedom is better thought of not as an attribute of individuals but as a relation formed within a discursive community (13-4). Banu Bargu draws on Hannah Arendt to argue that ‘[c]ommensality [the practice of eating together] builds amicable relations across gender, sexual, ethnic, religious and racial lines’(52). It would have been interesting to see Bargu put this unambiguously upbeat assessment of commensality to the test. One might argue that the amicability fostered by the commensality of a patriarchal family meal would not necessarily challenge unequal social relations but can take place in a manner wholly patterned by them and might even be said to serve a role in normalising and reproducing them.

Commensality is something Mitchell Cowen Verter also touches on in his consideration of anarchism as a practice of care (108), which he is keen to distance from the identification of hostility as the primordial political relation that he sees in Tiqqun (102). The prioritisation of hostility connotes Carl Schmitt’s politics of enmity with which Derrida is concerned in The Politics of Friendship (Derrida 1997). Derrida’s book is a touchstone for Todd May who argues that friendship is the already lived reality of egalitarian relations and the possible prefiguration of meaningful political solidarity. If one is concerned too unproblematically with the possibility of egalitarian political community – especially when this is grounded in such everyday habitualities as eating together or friendship – it makes something of a mystery out of how something as inegalitarian as the capitalist state ever came into being and what, if anything, might be done about it.

Anarchism is often complemented and sometimes juxtaposed with Marxism throughout the collection and while these intersections are often interesting, they are nowhere developed with any great systematicity or particularly strong argument. Bottici emphasises the common ground between anarchism and Marxism, noting that ‘freedom is also the crucial concern for Marx, who from his very early writings is concerned with the conditions for human emancipation’(12) and treats anarchism and Marxism as a mutual ‘antidote to their possible degenerations.’(20) Alberto Toscano initially seems more wary than Bottici of bringing anarchism and Marxism together, writing that:

The effort to draw intellectual and strategic resources for present anti-capitalist praxis from anarchism and Marxism seems jeopardized from the start by the dispiriting alternative between the production of sterile doctrinal hybrids, on the one hand, and the neurotic revisiting of the primal scene of separation on the other. (158)

However, Toscano manages to overcome his own reluctant scepticism to affirm a geographically inflected development of these traditions through Peter Kropotkin, Elisée Reclus and David Harvey. Similar to Bottici, Grubačić sees anarchism as key to responding to deficiencies in Marxism and hence making it possible to respond to his grandmother’s charge when she states, ‘I will be a communist for the rest of my life. But my generation found a wrong path to communism. The responsibility for your generation is to find a different path.’(187)

The accused of Tarnac, alleged authors of The Coming Insurrection (Invisible Committee 2009), contribute a manifesto of sorts titled ‘Spread Anarchy, Live Communism’ and in a move away from classical Marxism the paper advocates ‘blocking the circulation of commodities rather than occupying the factories’(232). This sounds less sustainable than the more conventional strategy it rejects and the pseudonymous collective is criticised by other contributors in the book on a number of points. Toscano condemns the ‘catastrophic optimism’ of the Invisible Committee’s The Coming Insurrection (ibid.) and asserts that their ‘opposition between the commune and the metropolis is a false one’(165). This tendency to extoll the rural commune over the metropole can be seen when they write that ‘For those who are nowhere, cybernetic philosophers or metropolitan hipsters, the political question never makes sense.’(228) In this one can detect a dubious hint of Heideggerian pastoralism read through Reiner Schürmann. Richard Cowen Verter offers further criticism, accusing them of reproducing ‘the same military logic promoted by the patriarchal state’ with a ‘sectarian rhetoric’ that is ‘idiotic and reprehensible.’(109) In short, no one takes the accused of Tarnac as seriously as they take themselves; except perhaps the police.

At the ambiguous centre of the collection is the aporia posed by Judith Butler’s article ‘Palestine, State Politics and the Anarchist Impasse.’ This chapter can be considered a companion piece to the book Parting Ways: Jewishness and the Critique of Zionism (Butler 2012) and here she is concerned with ‘two non-state centred forms of activism, Israeli anarchism and Palestinian modes of struggle that hold open the distinction between self-determination and statehood’(206). Butler is wary of how unequal access to citizenship can act as a structural restraint on the possibility for a sustainable political community at the intersection of these two activisms, writing that:

[N]o matter how moving and important some of these coexistence projects may be, they remain sporadic and isolated as long as their work fails to address the concrete legal, military and economic means by which the state maintains discrimination […] If the structure of occupation remains the same […] then such carefully structured instances of cohabitation become transient moments, eclipsed time and again by these overwhelming structural realities. (213)

The emphasis on these structural realities could make this a strong criticism of much anarchist activism as essentially transient, a criticism with potentially broad application beyond the immediate context here. However, Butler goes on to characterise anarchist activism against the wall that builds ‘new modes of sociability between Israelis and Palestinians’ as ‘crucial activity, critical, radical, and exemplary’(215), though this high praise struggles against the negative force of the preceding critique: What are new modes of sociality and cohabitation against the concrete legal, military and economic situation? It is a question that re-interrogates much of what we have already considered.

The anarchist impasse of Butler’s title refers to Uri Gordon’s Anarchy Alive (Gordon 2007). Butler criticises what she sees as Gordon’s assumption that the ‘paradox of Israeli anarchism and Palestinian political aspirations is that the former are against the state and the latter are for the state’ (216). Butler criticises Gordon’s neglect of ‘complex Palestinian debates on statehood’ (217) and advocates a bi-nationalism based on a nationalism said to be different from ‘the nationalism that supports the nation state’ (219) to conclude that ‘The rights of Palestinians to determine the course of their mobilization is the very instance of the principle of self-determination which all allies have to affirm.’(222) Butler seems to be on the edge of concluding that the conventional theoretical commitments of anarchism might be brought into question by the demands of the concrete political situation; that there is an ethical obligation for anarchism to listen to the other even at the expense of itself, in the name of itself or at least in the name of the self determination of the other that it obliges itself to hold dear. However, the question of whether Butler maintains that Jewish Israeli anarchists must respect the Palestinian demand for self-determination even if this takes the form of a call for a state and has citizenship as one of its goals is never decisively answered. It therefore remains unclear whether the most prominent theorist in the collection really commits to the anarchist turn as such.