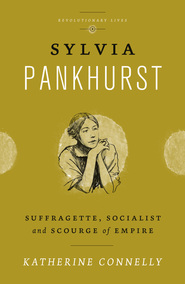 Gary Roth is the author of The Educated Underclass: Students and the Promise of Social Mobility …

This short, fast-paced biography reclaims Sylvia Pankhurst (1882-1960) for the labor movement of old, with the clock reset to the years just prior to the First World War. The best sections cover Sylvia’s early life and initial years of political engagement. The Pankhurst family was well-known for its radical politics. Sylvia’s father drafted the law that finally gave married women the right to own property, which until then had defaulted automatically to their husbands. Sylvia’s parents also opposed Britain’s imperial project and advocated passionately on behalf of a democratically-elected government to replace the limited suffrage that applied to male property-owners exclusively.

After her father’s death, Sylvia’s mother and older sister (by two years) became energetic advocates of women’s equality by heckling anti-suffrage politicians, organizing teams of women to smash department store windows in posh commercial districts, and devising other controversial tactics that embarrassed Britain’s ruling elite. Discouraged by the labor movement’s superficial support for women’s issues, the two Pankhursts (mother and sister) increasingly favored a suffrage that would apply solely to women from this elite (e.g. those who owned property). This orientation strengthened over time, despite the campaigns for universal suffrage that began to sweep the country. Only Sylvia linked women’s suffrage with the working class.

Katherine Connelly focuses heavily on the rift within the Pankhurst family in order to explain Sylvia’s political evolution. What characterized each member was the total commitment to their respective causes. Step by step, they escalated their tactics the more belligerent and unyielding the opposition they encountered. For Sylvia’s mother and sister, their feminism was strengthened by distancing themselves from men and eventually abandoning any attempt to work within the labor movement. Women’s politics for Emmeline and Cristabel Pankhurst meant not just a refuge from men, but also a place where women could develop themselves unencumbered by male pressure and restrictions. Connelly’s biography, however, emphasizes the conservative turn that their politics took, not the feminist thrust that accompanied it.

The Pankhurst name drew media attention. This was as true for Sylvia as it was for her mother and sister. By default and by inclination, Sylvia became an organizer, fundraiser, publicist, and media sensation. She wove women’s issues, workers’ rights, and a principled opposition to British imperialism into an all-embracing activist philosophy. But unlike her kin, Sylvia was a coalition-builder, the feature of her career that most interests Connelly, who focuses on Sylvia’s attempts to win working class women for the issue of women’s suffrage.

Sylvia Pankhurst also embraced creative and controversial tactics – including imprisonment, hunger strikes, and the attendant forced feedings – in the attempt to draw attention to the hardships facing impoverished women. The dining halls and accompanying services that she organized in poor neighborhoods are particularly noteworthy, all part of her thrust to always work on a grass roots level. Overlapping this militance, however, was a quite moderate understanding of radical politics that focused on the vote, elections, and legislative reform. Connelly highlights the ‘great historical significance’ of Sylvia’s speaking tours to the United States because she was one of the first women to address state legislatures (39). Her affair with the decades older, married friend of her parents, Keir Hardie, encouraged this same combination of militance and moderation, given his status as a trade union leader and member of parliament.

Connelly seems to lose interest in Sylvia Pankhurst precisely when she begins to question the limited approaches to social reform that characterized the labor movement. The First World War prompted a thorough reconsideration of previously-held beliefs, which Connelly portrays solely in terms of Sylvia’s anti-war attitudes. She emerged from the war as a harsh critic of the pre-existing socialist movement. Sylvia’s embrace of the Bolshevik revolution, which Connelly follows in great detail, was true for the entire radical left, not just in Britain but in every country on every continent.

Sylvia was a founding member of the British Communist Party, but her independence – despite direct appeals to her from Lenin – led to her eventual expulsion. Connelly reduces these profound disagreements to a matter of tactics, of whether or not to participate in elections and deemphasize the revolutionary conclusions that flowed from the radical left critique. Sylvia’s criticisms were considerably more developed and multi-dimensional than Connelly lets on. She devotes much of this section to a simplified discussion of Lenin’s ideas, whereas Sylvia is relegated to the background. The Bolsheviks were intent on taming the radical tendencies to their left, of which Sylvia was Britain’s leading spokesperson. Her allegiances shifted briefly to the Communist Workers Party, in line with developments in Germany and elsewhere, but this too is only sketchily portrayed by Connelly who relies on outdated accounts of the European events.

Sylvia remained deeply political, but after 1921, she steered clear of any left organization. Starting in the early 1920s, her attention turned to the rise of fascism on the European continent, even before most others. Anti-fascism was never a pure doctrine, since most every adherent wound up supporting one or another of the various international power blocs. Sylvia supported the Allies. Notwithstanding her support for Britain’s wartime efforts, she continued to protest its imperial ambitions. She focused primarily on the fate of Haile Selassie’s regime in Ethiopia, once the British had liberated the region from the Italians. Reminiscent of the politics championed by her family decades before, Sylvia organized picket lines against British imperial policy while also fundraising to build medical facilities in Addis Ababa. This wasn’t so much a political evolution in the manner portrayed by Connelly as it was a retreat into the past that was prompted by her political isolation. Shunned by her family and by the left political parties, her evolution had become idiosyncratic.

Connelly’s Sylvia Pankhurst has been published in a book series in which ‘personal lives are dealt with lightly except insofar as they mesh with political concerns’ (folio page). This seems to have encouraged Connelly to leave out of consideration the decision-making processes that are crucial to the biographical endeavor. It is important to know why Sylvia made certain decisions about her life and political commitments and what the alternatives might have been. Sylvia Pankhurst refused to follow the dictates of others, whether these were family members, political authorities, or revolutionary leaders, despite the cost to her own status and well-being.

In sum, Sylvia Pankhurst: Suffragette, Socialist and Scourge of Empire is burdened by Katherine Connelly’s political inclinations. Connelly is still fighting the fights that Pankhurst abandoned. For a biography of her, Barbara Winslow’s 1996 Sylvia Pankhurst: Sexual Politics and Political Activism remains preferable.