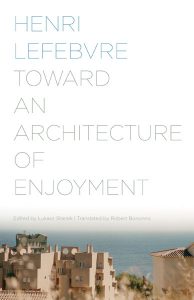 Henri Lefebvre
Toward an Architecture of Enjoyment

John Ruskin bemoaned the idea that The Stones of Venice was simply a book about architectural style (as many critics interpreted it) – rather, he proclaimed, its essence was the chapter describing the ‘liberty of the workman’; it was a book about the creation of ‘living souls’. Similarly, Henri Lefebvre’s ‘architecture of enjoyment’ is hardly about architecture and enjoyment as ordinarily, or even professionally, understood. If it were, it would mistakenly sit next to Alain de Botton’s Architecture of Happiness, and be read simply as a contribution to everyday aesthetics, and to design generally. Lukasz Stanek notes this possibility in his substantial introduction to Toward an Architecture of Enjoyment, before quickly setting its proper theoretic and political context. So, in summary, the work is best understood in terms of Lefebvre’s The Production of Space (1974) and its ideas about architecture as a “mode of imagination” (xiii). And like that work, it is the culmination of talks, journal articles, and intellectual disputes from the 1950s through the 60s relating politics, especially in France, to “architecture, urbanism and space production” (xiv). Indeed we need to note the history of the text too – it was found in 2008 having been written in 1972-3. It was commissioned by the sociologist Mario Gaviria as a research document on Spain’s Mediterranean leisure industry, specifically Benidorm, exploring the idea of tourist centres as “laboratories of the employment of free time” (xxix). Stanek’s introduction notes that both Gaviria and Lefebvre thought the traditional left was too ascetic in its understanding of such resorts; and also a general reaction to the perceived austere functionalism of contemporary urban planning. Exemplifying that reaction were speculative projects to improve mass housing by adopting a more leisure-oriented approach – for example, the magazine Actuel (No.12, September 1971) published a ‘revised and corrected Quartier d’Italie’ suggesting a plastic bubble, murals, a Swiss chalet, an ‘old house’ and so on as correctives to this modern Parisian housing estate (xviii). But this was more than a matter of ‘taste’: for a short period the French left’s political aims were defined in terms of architecture with the Common Program – a coalition between the French Communist and Socialist parties in 1972 – “positing habitation as the core of a comprehensive political project” (xl). Issues about ‘abundance’ and ‘self-realisation’ came to the fore, more prosaically about long commuting times, the absence of green spaces in urban housing estates and so on. But also for Lefebvre about creating spatial units that can be self-administered and self-managed in economic and social terms; and about whether Lefebvrian space – a space of leisure and self-realisation – is really possible in a capitalist economy at large.

The broad context of Lefebvre on architecture remains, then, relevant both intellectually and practically – indeed, it predates him and goes outside France to the early twentieth century English garden city movement; and now, incorporating ideas about ‘well-being’ into design problems is considered best practice in the profession. But it is these ultimately top-down approaches to architectural practice (from Ebenezer Howard’s famous garden city diagrams, through Le Corbusier and modernism, to the dominance of global superstar architects) that Lefebvre also argues against and gives his work its special interest. At best most designers have become simply specialists in ‘user needs’, experts in amassing and analysing data for their corporate clients, rather than, in Lefebvre’s model, involving themselves with people to help them utilise their creative capacities (xiv).

For Lefebvre then “The Question” of architecture is first characterised negatively – it is not about construction (the architect as engineer), nor about monuments (the architect as artist). Architecture, rather, should be considered as the “production of space at a specific level”, from furniture to landscapes (3). In addition, Lefebvre rejects the idea that “everything is blocked because capitalism rules and co-opts everything” (4). This ‘initial reduction’ or ‘isolation’ of the question – as Lefebvre puts it – allows him to frame architectural work in terms of utopian imagination and bodily pleasure. Architecture – as the production of space – is free from the everyday demands of urban planning and bracketed from capitalism. Little wonder that an enquiry into Benidorm – a place of conscious excess and play – would interest Lefebvre, and perhaps reveal the kind of space an architect intent on jouissance would produce. Lefebvre mocks the architecture of ‘needs’, both at city and domestic levels, contrasting its ‘abstract utopianism’ with the ‘concrete utopia’ suggested by “lived experience” (5).

But is this really akin to ‘life on holiday’? What grounds and directs a production of space distinct from merely functional architecture? There are at least some further clues to Lefebvre’s idea of an architecture of jouissance – or happiness, or enjoyment – in his positive references to Eastern and Gothic architecture. But still it amounts to little more than that, a recognition of non-functional impulses to build temples and castles and palaces – of builders moved by the everyday rhythms and passions of the human body yet “transfiguring the quotidian” (10). And for the most part their motivation is “death, violence and the beyond”, so that Lefebvre still wonders if they have a counterpart, “an architecture devoted to happiness” (16). He can only find one: “Grenada: the Alhambra, the palace and gardens of Generalife” (22). So: “what can we conclude for the future? Can this situation be reversed [that is, modern asceticism, with no real directions from the past] … how and when, and under what conditions?” (23). In Lefebvre’s ‘conclusions (injunctions)’ there are more suggestions: the concrete utopian view directing the production of space “arises from considering the total body” and that is characterised negatively by rejecting the crass hedonism of gyms and tanning salons and the like and their related architecture as parodies of human enjoyment (148). The positive characterisation is hard to come by though, reading Lefebvre – and is a significant omission given that other anti-hedonistic views of human pleasure abound and deny individual creativity altogether. Typically then Lefebvre states that “what is important is what is environed, the body, and not the environment” (150). And that architecture requires a new paradigm of oppositions, body and non-body, enjoyment and suffering, against existing contrasts between spirit and matter, real/ideal, man/nature – “in this way the conditions of enjoyment can be concretely realised” (150). And more notes (that is all they are, however rich): architectural practice’s functional relationship to enjoyment is that it “allows it, leads to it, prepares it” (152). At last, though, the key to Lefebvre’s architecture of enjoyment: first, the basic anti-functionalism: “No signs!”; second, the ‘theory of moments’: “the space of enjoyment cannot consist of a building … [by] places determined by their functions… Rather it will be … moments, encounters, friendships, festivals … play” (152). In summary, for Lefebvre the architecture of enjoyment is “places and instants of moments” (152).

The idea of ‘moments’ that escape normal societal determination is pivotal to Lefebvre’s general philosophy and to understanding the idea of a space produced for enjoyment. Lefebvre asks us to step away from thinking about ‘architecture’ as ordinarily understood (from ideas of civil engineering or socialist planning or iconic buildings); but the step is more radical still, beyond any focus on the built environment to ideas about authentic individual life. The key ‘architectural’ debate for Lefebvre in the 1960s was with Guy Debord about how the ‘moment’ is best explained and lived. The idea of a ‘moment’ is first mentioned in Lefebvre’s autobiographical La Somme et le reste (1959) and is developed as a ‘theory of moments’ in Critique of Everyday Life (volume 2, 1962). It is variously described as a ‘moment of prospective subversion’, ‘the attempt to achieve the total realisation of a possibility’, a wish to live fulfilled and exhausted in a single act. Debord was aware his notion of the ‘situation’ – the detournement especially, with its deliberate subverting of the everyday – was similar and he published a paper called Theorie des moments et construction des situations in 1960 based largely on conversations he was having at the time with Lefebvre. Exegeses aside, it is clear that Lefebvre’s ‘architectural’ concerns were not with systems but with the conditions and possibilities for ‘live experience’. In this he shared common ground with Debord – both about the significance of ‘moments’ and the real possibility to escape systems of commodification and control through certain kinds of experience. Still, Lefebvre’s ‘moments’ have a sense, theoretically at least, of permanence and durability – akin perhaps to aesthetic experiences as confrontations with value – that are absent in Debord’s Situationist ‘happenings’ and ‘interventions’. There is, seemingly, little evidence to support this in Toward an Architecture of Enjoyment – except Lefebvre’s insistence on the human body’s capacity for pleasure as central to any ‘building’ we do: “architecture will involve a space that is more or less the analog of the total body” (151). I would suggest then similarities with John Dewey’s attempt to explain the fine arts in terms of the ‘live creature’, giving aesthetics a biological base. And that Lefebvre realises too the absurdities that can follow from this: he notes a ridiculous proposal for a ‘Center for Sexual Relaxation’, how the body can be effectively ‘functionalised’, its opportunities for jouissance represented as consumer goods and services.

Stanek, in his Introduction, notes how Lefebvre was taken by the Situationist-inspired events he witnessed – their reappropriation of Les Halles in Paris in the late 60s particularly, using temporary, mobile structures, using it as a place of permanent festival while it awaited demolition (in 1971). But perhaps he noted the paradox too – that a non-hedonistic commitment to pleasure, like his, is one to value too, and that it demands permanent conditions for creativity and its reception. Otherwise, what are these ‘moments’, these ‘festivals’? Now, we are told to buy them and we see them sponsored all the time, 24/7. So I wonder if in arguing against the left’s ascetic tendency – rightly – Lefebvre forgot the centrality of ‘work’ in any concrete utopia. As it stands, his architecture of enjoyment sits alongside other ‘transfigurations of the commonplace’ and ‘poetics of space’, like Arthur Danto’s or Gaston Bachelard’s, only offering us other, contextualising, imaginative, ways to see the same. Of course Lefebvre doesn’t mean to make us all critics or poets – to give us only their exceptional ‘moments’, their capacity to produce space for enjoyment. But without a developed theory and practice of making – an economics and aesthetics of enjoyment, of works – our ‘moments’ remain false, our work still unfree, along then with its unhappy space.