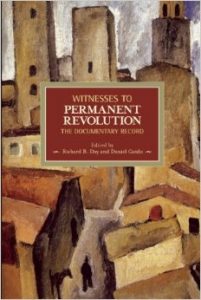 Witnesses to Permanent Revolution is a collection of writings from the major theorists of the Second International that traces the debate around permanent revolution leading up to the First World War. Edited by Richard B. Day and Daniel Gaido, it repeats the format of their other collection of translations Discovering Imperialism: Social Democracy to World War I (Haymarket, 2012). Day and Gaido provide a very informative Introduction to the collection as a whole, as well as explaining the particular context of each piece that explains its particular origin and place in the wider discussion.

It requires some background knowledge to appreciate the collection at its best, as the nature of the additional works, featuring more obscure or previously unavailable articles and speeches, means that the best known statements of the various contributors views, such as Lenin’s Two Tactics and Trotsky’s Results and Prospects, are necessarily not included. There are contributions, mainly previously unavailable in English, from the obvious main players, Trotsky, Lenin, Luxemburg, Plekhanov and Kautsky but refreshingly features the lesser known but, it transpires, just as significant writers like David Riazanov, later the curator of the Marx and Engels archive in the 1920s, Parvus, Trotsky’s mentor and collaborator, and Franz Mehring, Marx and Engels’ biographer and an internationalist comrade of Luxemburg in the First World War.

The relevance of the debate amongst Russian Marxists about the prospects for their forthcoming revolution seems a very long time ago now. More than just the time difference is the change in historical period. The Stalinist counter-position of socialism in one country to the Trotskyist permanent revolution has lost much of its bite, with the collapse of the former and marginalisation of the latter. Indeed this diffidence is expressed rather well by A.Ezergailis, a reviewer cited on the back cover, who says “the arguments here are not without contemporary relevance, even if from today’s perspective it is a polemic where everybody is right. Summing up recommended”. Actually what is interesting about the discussion was that not everyone was right.

There is much to be learned by the tone and seriousness with which the participants undertook the discussion. Their erudition, easy familiarity with Marx’s texts, the history of revolutions over the previous century and most importantly, their ability to analyse society through the spectrum of historical materialism, is rather brilliant. Trotsky’s contributions shine, not only as he was able to see the argument through to the end, but as his literary skills are unrivalled even in this elevated company. The proof of “rightness” was not demonstrated by a familiarity with the sacred texts, everyone knew them inside out, but in the ability of its participants to apply Marxism to describe and explain the contradictions of pre-revolutionary Russian society. This is no exegetical discussion –the proof of the pudding is not in the knowledge of the recipe, but in the eating.

There was at least agreement among them around what the theory of permanent revolution was. Permanent revolution – or uninterrupted revolution (the terms were used interchangeably) was the idea that the coming revolution – everyone agreed a revolution was coming – would outgrow capitalism and become permanent, overflowing the limits of Social Democracy’s so-called minimum programme, the key and entirely concrete list of democratic tasks including, national liberation, the abolition of pre-capitalist landowning rights, the freedom of speech, the eight hour day and the establishment of a constituent assembly, and lead to the struggle for a workers government and socialism. The issue was, would this indeed happen, and if it did, what would be the result?

It was the relatively unknown Marxist scholar David Ryazanov, the leader of the Borba group, who provided the first major contribution to the debate in 1903. His piece Iskra and the Tasks of Russian Socialists developed many of the key themes that were to shape discussion over the next years. In a wide ranging polemic directed at Lenin, the leader of the Iskra faction and Plekhanov, the founder of Russian Marxism, Ryazanov explained how Marx and Engels had changed their tactics as a result of the experience of the 1848 revolution. The vacillation and weakness of the bourgeoisie then, meant that Marx and Engels had finally abandoned the struggle for a simply democratic revolution, in favour of a permanent one, that outgrew the limits of the classical bourgeois revolution to begin the transition to socialism. Taking the 1789 French Revolution as their model, Marx and Engels showed how, as a result of the growth of the working class as an independent force and the incorporation of the capitalists into the state, the bourgeoisie would not lead the bourgeois revolution. If this paradox existed in mid-century Europe, fifty years later in Russia it remained, but much more so. Plekhanov had told a Paris meeting of the Second International in 1889 that “the revolutionary movement in Russia will triumph only as a working-class movement or else it will never triumph” ( 32), but while the weakness and perfidy of Russia’s liberal capitalists in the struggle for democracy freedoms was a running theme of Marxist analysis, Plekhanov himself sought to reserve for the bourgeoisie a special place in the forthcoming bourgeois revolution. The low level of economic development, the existence of feudal or semi-feudal relations in the countryside, and the power of the Czarist autocracy, meant that the Russian revolution was to be a bourgeois revolution and logically a bourgeois revolution had to be led by the bourgeoisie, but how to have a bourgeois revolution without the bourgeoisie and most probably against them?

Plekhanov’s equivocal attitude towards Russian Liberalism, was mirrored in Lenin’s ambiguous formulations about a “people’s revolution” and a democratic dictatorship of the proletariat and peasantry, a formulation that attempted to maintain the independence of the working class, but limit them to the bourgeois minimum programme. At the height of the 1905 revolution Lenin flirted with the phase uninterrupted revolution, but the problem remained, how could the working class, the only class capable of leading the revolution, take power in a very background country, where the economic pre-requisites for socialism did not exist?

Riazanov explained that by the late nineteenth century, due to the specific uneven and combined development of Russian capitalism, the working class were conscious and powerful. As the cities led the countryside, if the workers led the cities, so the workers would lead the countryside. Hence Riazanov’s rejection of Marx and Engels mistake in the 1848 revolutions in limiting the revolution to democratic demands. These themes were picked up by Parvus and Trotsky, who particularly followed Riazanov in stressing the peculiarities of Russian development.

The parallels with the recent revolutionary wave in North Africa are obvious. In Egypt a military dictatorship, closely entwined with domestic capital and sponsored by the USA, saw a revolutionary wave establish a kind of democracy but, with the power of capital and the army essentially undisturbed, except in the trial of Mubarak the military’s former commander in chief, and incidentally one of the richest capitalists in the country. After a period in which the army tolerated the existence of limited democratic rights, they used the narrow reactionary obsessions of the Muslim Brotherhood to abolish those rights, re-impose military rule and free Mubarak. Not only were domestic capitalists against any democratic rights, they united with the army to circumscribe them and then crush the Muslim Brotherhood. There was no social force capable of defending, let alone extending, those democratic rights. The small domestic working class was unable to act as an independent force, to lead the entire nation against the capitalists and army and so no democracy, however shallow, could exist. The Egyptian revolution could be permanent, combining the fight for democracy with the overthrow of the capitalists and the army, through the establishment of a constituent assembly and workers government, or it could be nothing at all.

Karl Kautsky, the aptly named “Pope” of Marxism at the time, adopted a position on the left of the discussion. As was typical of his role at the centre of German Social Democracy, he avoided explicitly concluding that if the revolution was to be permanent, so it must be a workers revolution. But as the collection demonstrates, Kautsky was no different in this respect from Luxemburg, Parvus, Riazanov or Lenin. Trotsky was the exception. Kautsky’s equivocation became significant only later, with his abandonment of the leftist logic of his position and opposition to the Bolshevik seizure of power.

Witnesses to Permanent Revolution provides much stimulating background material to the discussion of the prospects of the Russian revolution in the run up to the First World War. The study of the past holds no magic key to unlock the future, but what the collection demonstrates is how Marxist revolutionaries in the Second International, were willing and able to apply Marxism as a practical guide to action, not always perfectly by any means, but the advantage of the method they shared was that the nuances of the debate could be drawn out and the practical conclusions of the participants tested out in practice. This collection needs to be read alongside the major works of the authors on the subject if the reader is to gain the full benefit of its insights, but the quality of the writing, particularly from Trotsky, means that it can be dipped into by the occasional reader too. All in all to be recommended, not because this was a debate in which everyone was right, but precisely because this was not so, it is the conflict that provides the interest and the demonstration of how, even when authors share a common method and premise their conclusions could be so strikingly different.