Marx & Philosophy Review of BooksReviews‘In the Vale of Tears: On Marxism and Theology, Volume V’ reviewed by Marcus Hunt 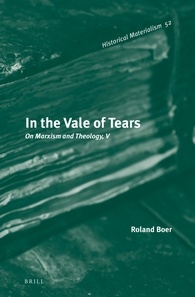 Roland Boer
In the Vale of Tears: On Marxism and Theology, Volume V

Marcus Hunt is a postgraduate student of philosophy at Queen’s University Belfast. He …

In the Vale of Tears promises to be the theoretical capstone of Boer’s expansive study of the tempestuous relationship between Marxism and theology. It only lives up to this promise in part. Though there is a degree of interconnection between the chapters that constitute this volume each might well be read alone and judged separately on its quality, which is not uniform. Whilst some of the chapters are popularly intelligible, others are difficult and pitched to a highly specialised audience, though a depth of scholarship permeates them all.

So far as a comprehensive account of the relationship between Marxism and theology emerges it is to be found in chapter 1. One way Boer illustrates his views is by contrasting them with the positions of neo-atheists such as Dawkins and Hitchens. These neo-atheists think of theology as concerned only with establishing the literal truth or falsehood of religious claims; therefore they see theology as an area of study to be rejected out of hand as a tissue of falsehood, unworthy of further engagement. Rather, Boer suggests that religious beliefs are of importance because of the role they play in broader socio-economic formations. Theology need not simply be establishing the truth value of religious beliefs, but rather can be a ‘materialising theology’ (48) in which religious beliefs are comprehended and evaluated as sets of discourses which impinge on our understanding of our social condition. Whilst the neo-atheists hold a uniformly negative view of the effects of religious belief, Boer argues that religious beliefs can be either revolutionary or reactionary – a careful analysis of particular religious texts and discourses is required rather than wholesale condemnation. The meaning of ‘materialising theology’ is a clearly comprehensible one which fits neatly with Marxist treatments of other elements of the social superstructure: theology is to be inspected and uncovered in terms of its economic, sociological and political origins and effects.

Boer also mentions an opposite and equivalent method of ‘theologising materialism’ (49), but its meaning is not explained with clarity, Boer remarking only that with it ‘one might take historical materialism and push it hard, untiringly and without mercy, until it too arrives at its theological truth content’ (49). Its meaning becomes clear after Boer’s investigation of Marx’s notion of Aufhebung.

Boer describes Aufhebung as the ‘negation, preservation, affirmation’ (56) of a thing. The claimed novelty of Boer’s interpretation of Aufhebung, as applied to religion is that it goes beyond the familiar understanding that religion is a negation of life, ‘the sign of an alienated social and economic reality’ (55), which itself needs to be negated. Boer adds the idea that the Aufhebung of religion is, `not merely a passing-through religion with a whole new destination in mind; no, Aufhebung actually involves both religious and economic alienation.… Rather than passing from one to the other, it “embraces both aspects”’ (56).

As an example of this interpretation of Aufhebung, Boer gives the case of Marx and Engels’s engagement with Stirner in The German Ideology, in which Stirner’s theological arguments are countered with equally theological arguments and biblical references. This sort of exercise seems to be what Boer intended by his term ‘theologising materialism’: that theological discourses should be taken up and creatively engaged with on their own terms to discover their revolutionary potential. This, Boer claims, is a more productive alternative to the simple negation of religion, which is found in ‘the banal assertion that God does not exist’ (53).

Chapters 3 and 4 are the strongest of this volume, the most accessible to the general reader, and those most likely to be of interest to theologians. They are also the chapters that most clearly embody Boer’s ‘materialising theology’. Chapter 3 illustrates the political ambivalence of Christianity, showing through the consideration of historical examples that it is at once reactionary and revolutionary. On the reactionary side we are shown two familiar examples; papal political power in the medieval period, and the treatment of heretics, as well as a less familiar account of Catholic missions of California’s Spanish colonial period. On the revolutionary side Boer gives us accounts of three Christian socialists, Wilhelm Weitling, Thomas J. Hagerty, and Norman Gottwald. As interesting and well researched as these accounts prove to be, one might say that Boer has passed over more significant examples of the intermingling of socialism and Christianity, such as early Methodism. In the second part of chapter 3 Boer reviews how far various Marxist theorists have recognised the ambivalence of Christianity, or have misinterpreted it by ignoring either its reactionary or revolutionary aspect. He especially criticises those, such as Luxemburg and Kautsky, who have bought into the narrative of Christian history as involving a fall from the authentic religion – communal, socialistic and revolutionary – to a degenerated, hierarchical and reactionary church.

In chapter 4 Boer argues that the political ambivalence of Christianity reaches all the way back to the Apostle Paul. He contrasts the authoritarian remarks made in chapter 13 of the Epistle to the Romans with the egalitarianism evident in the Epistle to the Galatians, a tension that allowed Christianity to appeal to ‘the poor peasant or slave or tenant… [or] the wealthy landlord’ (198). To confirm his interpretation Boer briefly discusses various ways in which others have tried to resolve the ambivalence within Paul’s oeuvre, but concludes that the tension is a genuine, irresolvable one. Boer then, in a sterling instance of Marxist method, describes the social and economic changes underway in the 1st century in the eastern Roman Empire, and uses them to account for Paul’s political ambivalence. Boer is hampered in this enterprise, as he admits, by the scarcity of sociological and economic information about the era. Moreover the argument that Christianity’s political ambivalence can be explained in terms of ‘the economic clash and transition between two modes of production’ (196) will strike even those who support a base-superstructure theory of society as requiring further elaboration before it is convincing. For example, Boer does not discuss at all the Gospels or the Old Testament, the differing moral spirits of which have often been noted, nor does he appraise the effects that subsequent socio-economic changes may have had on Christian theology and practice.

The method of ‘theologising materialism’, of critical engagement with theological concepts, is deployed in chapters 2, 5, 6 and 7. The first three of these involve difficult, at times opaque, discussions. Chapter 2, on the concept of ‘myth’, creates a five stage argument drawing upon Adorno, Althusser, Badiou, Barthes, Bloch, Deleuze, Guattari, Horkheimer, Jameson and Negri. Troublingly, Boer occasionally uses non-standard interpretations of these authors, which may trip up even those who are familiar with all of them. Boer refers with apparent delight to his ‘subversive etymology’ (70) and to ‘perhaps a conscious misreading’ (94) of Badiou. Despite the evident breadth of Boer’s scholarship, the argument remains an uncomfortable blend of too many diverse ingredients. The conclusion of it all is that myths have political functions. Notably, like utopias, myths represent to us ‘a powerful image of what may be achieved’ (121), and may help to bring about what they depict. The latter half of the chapter, as an example of the role myths may play, is an account of the engagement of Engels, Luxemburg and Kautsky with the mythical communism of early Christianity, which effectively communicates Boer’s point about myths. Chapter 5 deals with the concept of ‘kairós’ in the same difficult style as chapter 2, but does not contain a similarly lucid case study.

Chapter 6 concerns ethics. Though its approach is similar to chapters 2 and 5, its content seems almost completely divorced from the rest of the book, being only remotely either Marxist or theological. It discusses Judith Butler, Foucault, Terry Eagleton and Žižek and its central topic is a criticism of ‘the customary and habitual that dresses itself up as ethics’ (285) – an uncovering of the role ethics plays in the maintenance of existing power structures.

Chapter 7 contains the best display of ‘theologising materalism’ in this volume, and is where Boer’s scholarly efforts are displayed in the most jargon-free manner. The chapter concerns the differences between the concept ‘idol’ and the concept ‘fetish’, the significance that both had in Marx’s famous account of commodity fetishism, and how subsequent confusion of the two terms has mislead certain thinkers – notably the liberation theologists.

The conclusion of the volume is a hurried affair that attempts to tie up loose ends in a rather flaccid manner. Boer argues for the seemingly extraordinary theses that Marxism is concerned with transcendence, that Marxism is anti-secular, and that theology is secular. Unfortunately the arguments for these propositions turn out to be rather frivolous re-definitions of the terms ‘transcendence’ and’ secular’. We are told that Marxism is ‘transcendent’ because within the semantic cluster of that word is the term transgresso, itself connected with ‘notions of disobedience, rebellion’ (329) – Marxism is nothing if not rebellious and ‘transcendent’ of the current political reality. Similarly, ‘secular’ is taken to mean that which takes its ‘principles for life from this world and this age, not any world above or to come’ (325). With such a definition, theology’s concern with the human condition makes it ‘secular’, whilst Marxism’s vision of the future makes it ‘anti-secular’. The volume ends with an unhappily brief discussion of death, which does not get beyond noting the unwillingness of most Marxists to discuss it, apart from Bloch, who, as Boer notes approvingly, mystically views death ‘as a departure, as the beginning of a journey’ (334).

Boer’s promised overview of the relationship between Marxism and theology remains half-submerged. The volume contains three truly excellent chapters, and Boer’s application of ‘materialising theology’ in chapters 3 and 4 is very interesting, though the ‘theologising materialism’ of the remainder is often excessively abstruse and the conclusions it reaches somewhat uninspiring.