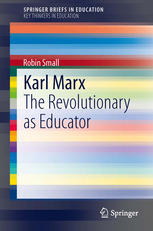 This book meets a need illustrated by a recent poster advertising a meeting for students at the London University Institute of Education that asked ‘Who was Karl Marx?’ Such is the repetitive diet of Foucauldianism, augmented by the latest academic fashion for Deleuze and Guattari, that even postgraduate students of education are unaware that Marx was, as this book begins by asserting, ‘an important educational thinker’. Although Marx wrote before the modern state school system was established, Small states ‘He is the greatest theorist of the society that gave rise to schools as we know them – and this is the society we still live in’ (1). As he adds, Marx wrote for people who needed to find out what was wrong with the society they lived in, and how to change it for the better, and so he was also an educator. More importantly, ‘Marx is an educator for us. He challenges us to develop our capacity to think critically about our own society’ (2). This is the seminal Marx presented in this book.

Robin Small, a philosopher of education at Auckland University who has previously written Marx and Education (Ashgate, 2005), is well qualified to introduce new readers to Marx’s revolutionary education in the concise form intended by Springer’s series on ‘Key Thinkers in Education’, edited by Paul Gibbs, in which each chapter is separately downloadable, although the overall price – in virtual form or hard covers – is exorbitant. Hopefully, however, the book will make its way into libraries, because it is an introduction to Marx’s life as well as to his thought. So Small begins with Marx’s own education at the Trier Gymnasium, quoting Marx’s prize-winning essay `Thoughts of a Youth on Choosing a Vocation’, which insists ‘worth can be assured only by a profession in which we are not servile tools, but in which we act independently in our own sphere’ (5). Then, in Bonn and Berlin Universities, Small introduces the ideas of Bauer, Feuerbach and Stirner, which influenced Dr Marx before ‘the theoretical mind, once liberated in itself, turns into practical energy’ (quoted 9) in the form of ‘Marx as Journalist’.

Small details particularly Marx’s debate with Stirner, who ‘wrote on education from a teacher’s standpoint’ (21), and with Feuerbach, taking ‘education’ in the third ‘thesis’ on Feuerbach ‘in a wide sense, to include all the influences that determine human development’ (19), like enculturation in the German term Bildung. Here ‘Marx is emphasizing a critical thinking which is also self-critical’ (24). Then in his first works with Engels, Marx breaks with Bauer to found ‘the theory later known as “historical materialism” [which] centres on a distinction between the “base” and “superstructure”’ (25), with education a part of the superstructure. ‘This is the basis on which Marx is able to advance proposals for school reform. He can acknowledge the limits to what can be achieved within a capitalist society, yet still look for opportunities for an education that runs ahead of the present state of things’ (27).

Thus in The Communist Manifesto Marx proposes ‘Free education for all children in public schools. Abolition of children’s factory labour in its present form. Combination of education with industrial production, &c, &c.’ What Marx meant by this in relation to the debate over factory schools and over state education as well as the curriculum, Small traces in Marx’s contributions to the educational programme of the First International. Here he ‘emphasized the need for working within the existing social order, while at the same time arguing against … education by the state’, and for ‘a system of state regulation without “interference”’, ‘citing as an example the decentralized public school system of Massachusetts’ (57). Marx and Engels were also impressed by the educational reforms of the Paris Commune, which ‘confirmed that a socialist revolution could not simply take over existing state power but would have to set up an entirely new apparatus of government’ (58). So, they advocated a polytechnic curriculum, which ‘imparts the general principles of all processes of production’, like Corbon’s enseignement professionel, which ‘rethought the idea of technical education’ to take advantage of the positive side of flexibility, so that workers can move from one branch of industry as desired, rather than spending their lives in ‘life-long repetition of one and the same trivial operation’ (66).

Meanwhile, Marx’s daughters enrolled in a relatively conventional academic schooling at the South Hampstead College for Ladies, where their father was rather proud of their achievements, but complained repeatedly about the fees! ‘None of this’, Small comments, ‘would have suited Eleanor Marx particularly’, as she was ‘the most like her father in personality – energetic and independent, with a strong rebellious spirit’ (53).

Having seen how Marx responded to the educational issues of his time, Small asks what we can learn from him now that education has become the principal legitimator of social inequality, and a prime means of social control over prolonged youth. ‘Simply repeating what he says … will not be enough … we have to bring our own thinking to the task’ (70). Small focuses on two central topics: the school in today’s society, and the teaching force. (It is a pity he does not extend this discussion to further and higher education, as the age of education has extended to schoolify these institutions.) ‘To rescue education from the influence of the ruling class’, as The Communist Manifesto urges, Marx resists restricting the curriculum to subjects supposedly protected from ideological influences; rather he sees the need to counteract them, together with tradition and habit. These are all instances of ideology, but ‘not simply deceptions imposed on some passive audience. They are grounded in experience and this is the source of their strength and persistence’ (73). ‘Marx located education within “practical social relations” rather than with art, religion and philosophy in the higher regions of the social “superstructure”.’ Education is thus in dynamic interaction with the economic base. As he puts it, ‘education produces labour capacity’, just as health care maintains or restores the ability to work, so that, as Small comments, ‘While the school may be a location where ideology is passed on, that is not its main function’. This avoids ‘the simplistic view that public education in capitalist society is an elaborate conspiracy to spread false beliefs’ (74).

At the present time, that of the so-called ‘knowledge economy’ and ‘information society’, specialised expertise is crucial to the creation of new wealth, as well as itself being a commodity. As Small points out, ‘In one draft for Capital, Marx speaks of the “general intellect” or “social mind” – that is, the sum of society’s scientific understanding and expertise – as being a means of production in its own right … As Marx puts it, the general progress and accumulation of society’s knowledge “is appropriated gratis by capital”’ (74); ‘At this point, invention becomes a business, and the application of science to immediate production itself becomes a factor determining and soliciting science’ (75). Institutionalised education is bound up with this development, but Marx adds that education distributes knowledge unequally to different classes, as it perverts what ought to be a public good into private knowledge. The modern state has turned public education into a quasi-market, which is ‘free’ only within narrow boundaries, so that promises of equal opportunities and access for all cannot be realised.

This process of marketisation entails what Small calls a ‘redefinition of the “ideological castes”’ (79). This is being imposed in a different historical context from that in which a rising bourgeoisie sought to establish its power, giving rise to Adam Smith’s distinction between unproductive labour, associated with older forms of production for use, and productive labour realised in the instance of the schoolmaster ‘belabouring the heads of his scholars’, because the proprietor has invested his capital in a teaching factory instead of a sausage one. Small comments:

The labour of teachers appears as an overhead expense. That is, it is necessary to keep the whole system going, but not identifiable as adding value directly to commodities … The issue is not just about keeping costs (which here means wages) down. It is about what kind of work teachers are doing – and what kind of work they understand themselves as doing. (80)

Small approaches this is by asking, in conclusion, whether teaching is a professional occupation.

The Manifesto rejoices that ‘The bourgeoisie has stripped of its halo every occupation hitherto honoured and looked up to with reverent awe. It has converted the physician, the lawyer, the priest, the poet, the man of science, into its paid wage-labourers’. And Small comments, ‘For teachers the employer may be the state rather than a private school owner, but the same conditions of work apply’ (82), before cautioning that ‘this is not the last word’, because Marx and Engels add, ‘Bourgeois society reproduces in its own form everything against which it had fought in feudal or absolutist form’. So we need to ask, are the ancient vocations – ‘the free professions’, as they are called in German – of doctor, lawyer and priest, being reproduced in a new form, so that the professional model is extended in this new form to new occupational roles? As well as ‘general intellect’, there is what Marx calls ‘general industriousness’ (looking and being busy, like Dickens’s Mr Panks), which the culture of professionalism values, along with a sense of personal responsibility. ‘In Marxian language’, Small comments, ‘this looks like a typical ideological mindset that not only presents a false picture of social reality but also acts to the disadvantage of those who adopt it’ (83).

The de-professionalisation of teaching, along with other professional occupations, as they intermingle in inter-professional working with standardised and simplified para-professions, is analogous to the de-skilling inflicted on industrial craft workers in the 1970s and ’80s. It involves also a loss of autonomous judgement and control over what was an example of what Marx called ‘free activity’, like the often-cited case of artistic expression, but more directly social, with collegiality as its form of solidarity, ‘even if professions tend at the same time to be quite hierarchical in terms of specialized expertise’ (85). It may be, therefore, that these forms of solidarity can be defended and extended rather than abandoned – as suggested by Magali Sarfatti Larson in the conclusion to her 1977 Marxist analysis of The Rise of Professionalism. Like general schooling, leading to graduation as citizen and worker ‘fit for a variety of labours’, re-vocationalised higher education, in which students have a sense of induction to practise in a field of real application – including the academic profession – might be the means for professional workers, in solidarity with other workers, to find ways of claiming and realising the full human potential of all work. ‘But perhaps’, concludes Small, ‘this is where Marx’s assistance runs out and we have to make our own decisions’ (85).