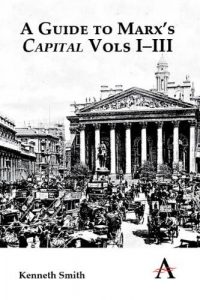 As a guide to Marx’s economic thought this book is so wrong-headed it would take far more space than is available to critique its assorted errors and misinterpretations. These begin with the title as this is not really a guide to the three volumes of Capital at all. What the author, a senior lecturer in criminology at the private University of Buckinghamshire, is really about is smuggling his own criticisms of Marx’s theory into print in the guise of an introduction for students. One of those criticisms at least has the merit of being original – or at least is not one I have ever come across before in the literature. That unfortunately does not prevent it being as muddled as all the others.

Smith’s introduction opens by invoking ‘Marxists as divergent as Louis Althusser and Karl Korsch’ to justify reading Volume 1 of Capital ‘in a different order to that in which it is published’. But the order of Smith’s guide is so idiosyncratic that it would leave any new student baffled as to why Marx ordered his three volumes in the way he did. Marx’s preface to the Grundrisse on moving from the abstract to the concrete as ‘ the concentration of many determinations’ is quoted, but not understood, as requiring a systematic ordering in the presentation of the investigation. Instead the author jumps about all over the place, lifting quotes out of context and devoting a disproportionate amount of attention to Marx’s reproduction schemas from the final part of Volume 2 of Capital because this is the focus of his ‘original’ critique. By contrast the fragmented elements of Marx’s crisis theory, which could do with reordering in an introductory guide, are barely mentioned apart from a passing reference in the short chapter on credit.

After the self-justificatory introduction, the so-called guide proceeds to the sections on absolute and relative surplus-value from the middle of Marx’s Volume One. After a quick survey of Marx on cooperation, the division of labour and machinery, in which he dismisses much of the argument as ‘historical’, he provides a longer chapter on primitive accumulation. This at least provides some useful quotations from Marx such as ‘it is notorious that conquest, enslavement, robbery, murder, briefly force, play the great part’ in the origins of capitalism from earlier modes of production. Yet he still manages to claim that Marx really agreed with the classical political economists on the frugality of some early capitalists who worked hard and saved up to form their capital, simply because Marx at one point makes an ironic comment to that effect. This may be a sign of the author’s inability to appreciate Marx’s humour but one suspects a rather more motivated attempt at misinterpretation here.

This is followed by a lengthy (43 pages in a book whose text runs to 191 pages), avowedly ‘difficult’, section on simple and extended reproduction culminating in a most peculiar chapter on what he terms ‘The precipitation of fixed capital’. The point, in summary, of Marx’s reproduction schemas, as Rosdolsky elucidated in a work Smith references but obviously hasn’t studied seriously, The Making of Marx’s Capital, is to explain how capitalism can expand without falling apart. Smith instead seems to think that Marx has failed to answer a question about the motivation of capitalists to accumulate as this entails they forego the use of surplus-value for luxury consumption. He acknowledges the standard argument about competition of different capitals driving the process but rejects this on the grounds that this does not explain ‘what motivated the first capitalist to invest’. That however is an historical question which is simply irrelevant to Marx’s own analysis of the systemic pressures which act as ‘external coercive laws’ for the individual capitalist. Smith’s own solution to his spurious problem is too ponderous to summarise here. Suffice it to say that he would benefit from reading the analysis by Costas Lapavitsas, in his recent Profiting Without Producing on money hoards and how they are mobilised by the credit system on behalf of the capitalist class as a whole.

What is especially presumptuous is for Smith to claim that he has provided a new explanation of Marx’s failure to complete the three volumes of Capital. The real difficulty, we are informed, was Marx’s inability to resolve the question of why capitalists are willing to take the risk of reproducing their capital on an extended scale (174). So Smith is claiming to have provided a solution to a problem which is spurious, and an answer to a question Marx never posed, about the individual motivation of capitalists, and then using that as an explanation of Marx’s failure to publish Volumes 2 and 3 in his lifetime. There is not a single piece of textual confirmation, from Marx’s extensive correspondence with Engels or anywhere else, for this preposterous argument. But then this is an author who in a note on further reading dismisses the whole of Marx’s posthumously published Theories of Surplus-Value (TSV) as too difficult to understand because it is ‘often very difficult indeed to separate what Marx is saying here as the expression of his own view on a particular question from when he is giving an account of what someone else has said’ (178)

If the author himself had had any understanding of Marx’s method it might have helped. As it is one suspects he didn’t spend much, if any, time at all on the TSV, and not much more on whole chunks of Capital Volume 3.

To return to the central themes of the guide itself, muddled interpretation and assertions without evidence follow in quick succession. A chapter entitled Mercantilism confuses the economic theory of the same name with Marx’s analysis of merchant capital and one about credit turns into a very weird argument about ‘the dissolution of the capitalist mode of production’. It is here that Smith presents another claim to originality by suggesting that as a result of the dominance of merchant capital ( which then becomes the preferred term to finance capital when he gets on to misreading Hilferding) there is now ‘relative underdevelopment of industrial production/industrial investment in the former capitalist countries of Europe and North America’ (90). Quite how they became ‘former capitalist countries’ (my italics) is not explained at that point. A few pages later it appears to be something to do with finance and monopoly capital, along with managerialism, generating a new hybrid mode of production no longer ‘based on the private ownership and control of capital’ (94 with the authors italics suggesting that this is really just a rehash of arguments from the 1950s about who controls the firm: shareholders or managers).

In the conclusion, however, it appears that this is not really a historical transformation after all as the capitalist mode of production has always been underdeveloped. This is because it has always been characterised by the dominance of mercantile capital, and speculation has always had primacy over accumulation as the ‘driving-force’ of the system. This is supposedly a result of the ability of mercantile capital to benefit historically from trade with the non-capitalist parts of the world. Today they (the merchants) are still able to benefit from buying cheap from low-wage economies and selling dear in Europe and North America. But then perhaps there has been an historical change as we are suddenly informed, without of course any actual data about global patterns of production, that ‘It is no longer General Motors or the Ford Motor Company but Calvin Klein or Matalan that are characteristic of the mode of production today’ (173)

It is only with the second to last chapter, on ‘The Labour Theory of Value and Value Theory of Labour’ that Smith reveals the root of his lamentable misinterpretations. He begins this section by invoking the late Geoff Pilling’s critique of a Ricardian version of a labour theory of value and then proceeds to dismiss Marx’s own theory of value in a manner which would have left Pilling himself appalled. At the heart of this chapter is a confusion between use-value and exchange-value which he defends with an egregious misreading of Marx’s comments on nature as a source of wealth (but not value) in the Critique of the Gotha Program. For Smith it is sufficient to invoke a painting by Leonardo Da Vinci to refute the theory which, as Marx carefully explains early in Capital Volume 1, cannot apply directly to non-reproducible commodities such as artworks or land which have a price but no value.

There has been a welcome proliferation of guides to and commentaries on Marx’s Capital in recent years. None of these is theoretically innocent. The standard work by Ben Fine and Alfredo Saad-Filho has been criticised for an excessive stress on production as distinct from circulation. The recently translated Introduction by Michael Heinrich has generated controversy for his ‘value-form’ approach and critique of Marx’s so-called Law of the tendency of the rate of profit to fall. David Harvey in the second Volume of his Companion has introduced an extensive commentary on the sections from Volume 3 on Credit into an analysis of Volume 2 as edited by Engels and criticised the structure of Marx’s work as misconceived. John Weeks on Capital and Exploitation, the first edition of which enlightened me many years ago, has recently been reissued. But all of these share a respect for Marx’s method and vision completely lacking in the travesty of a guide produced by Smith.