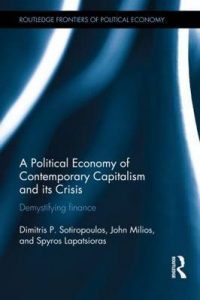 This book has a very important message. In brief the message is that finance is a sociopolitical power relation. It further makes a contribution towards understanding the great financial collapse of 2007-8 in particular, and the contemporary financial system more generally in the context Marxian political economy. It should be applauded for crediting Marx with particular depth concerning monetary phenomena, which often is underappreciated and misunderstood.

However, the authors take a critical approach and presentational tone that distracts from their accomplishments.

The book’s strengths are immense.

The essential argument is that finance is a power relation that mediates the class struggle. The authors put it this way: “finance is not so much about forecasting the future but about disciplining the present” (113, italics in original). This is an important insight. Finance is a social means, or “technology” to control the class struggle (155-79), which however is very much an unseen (and typically unintended) consequence.

Interest bearing capital is a form of what Marx called “fictitious capital” in the sense that it takes its value from the process of capitalization (51, 150). Or as Marx explains it, fictitious capital emerges once the conditions for reproduction are relatively predictable (which requires the historical process of primitive accumulation and the necessary conditions of the commodification of money, land, and labor as argued in part eight of volume one of Marx’s Capital), whereby the use-value on money becomes its potential to generate profits, for which money becomes a commodity, i.e. capital generating capital is “fictitious capital.”

According to the authors, fictitious capital is fetishized in the sense that, although it is passive in the production process, it appears to be the active entity and obscures awareness of the real active entities in production (155). With the concepts of fictitious capital and fetishism, Marx wanted to draw attention to fact that the class nature of capitalism is made radically esoteric or ontologically obscured. In other words, financial assets are in effect structural representations of capitalist relations […], signaling and calling forth the proper mode of behavior required for the effective reproduction of capitalist power relations” (2).

Marx’s fictitious capital is captured in the circuit of capital formula:

What is of great importance is that a loan (otherwise, stock or bonds), i.e. money or “M”, can generate surplus value (M’, if and only if M’ > M). This is the very point that Proudhon (22-4) explicitly denied (claiming property is theft), and that many leftist economists fail to understand.

Mainstream accounts are not incorrect to understand financial markets as an institution to reveal and disseminate economic and business information (96-7). Rather than being incorrect, mainstream and textbooks accounts of money and finance are radically incomplete. Money is a unit of account, means of payment, and store of value. Certainly Marx explicitly accepts this in chapter 3 of volume I of Capital. However, other attributes of money are veiled by the empirical reality of capitalism.

Likewise, finance is “productive” capital at least in two senses (56). First, as stated above, finance reveals and disseminates economic and business information (96-7). Second, derivative markets are a way for “functioning” capitalists to overcome price fluctuations (115-6). A great risk for producers is the possibility that the price they want and need to achieve the profitability desired may change during the capital circuit:

Put simply, firm A borrows Mloan (note: the loan here can alternatively be company stock or a company bond) then takes this “capital” to purchase inputs C (i.e. labor power and means of production). The functioning capitalist then sets this capital in motion at P, i.e. the production process, to create a new use-value or output at C’. During the sales effort the hope is that the sale of outputs generate M’ such that M’ is greater than M (M’ > M), but also that M’ is greater than M”. M” is the borrowed money Mloan (= M), plus an additional amount of money, ΔMinterest (based on the interest rate and time interval of the loan), so that M’ > M”.

What many financial derivatives do (i.e. futures, forwards, swaps, options) is guarantee a price to the “functioning” capitalists. This can be radically important to the “functioning” capitalist. It removes the risk from the “value-in-process” time interval and the “anarchy of production” whereby it is very difficult to predict market conditions during the “turnover time” or time interval of the circuit of capital.

The authors are certainly correct to point out that this is a commodification of risk, and is highly “productive” in the sense that it encourages “functioning” capitalists to engage in producing whereby they might not otherwise had done so.

In brief the argument is that in a Marxian theory of surplus value, derivative markets are “productive” and 100 percent consistent with the logic of capital. This of course is the mainstream defense of derivatives. But the authors radicalize the analysis. Derivative markets and the extension of credit to households make financial markets highly liquid (72) and households dependent on financial markets, i.e. credit (and other financial market activity) for purchasing goods and service (118-9). These innovations and extension of credit intensifies exploitation and destabilizes the capitalist system. In short, “capitalist exploitation is destabilizing” which the authors dub “Marx’s ‘financial instability hypothesis’” (54).

The authors seem to believe if they can argue and demonstrate that derivatives are “productive” in a capitalistic circuit of capital, then they are not parasitic. If so I disagree. It is the case that financial derivatives generate surplus value, but this by itself does not mean that they are not simultaneously parasitic. Nonetheless the authors’ stronger point is greatly appreciated: even in absence of parasitic capital, financial derivatives (similar to credit more generally) give rise to an immanent socioeconomic instability.

The letter of Marx strongly supports the authors’ point. Marx argues in chapter 21 of volume three of Capital that, contra-Proudhon and other vulgar economists, credit money does have a use-value, that use-value is the fact that it potentially generates surplus value and profit. Thus, a capitalistic credit system presupposes the commodification of money, land and labor and the predictable reproduction of the system.

I accept the authors’ strong points that financial derivatives are productive in that they generate surplus value, and that financial derivatives do “commodify risk.” However, this does not mean that all financial derivatives are the commodification of risk. Futures, forwards, traditional swaps, and options can all be understood as the commodification of risk. However, what about asset-backed-securities such as the collateralized debt obligations, or CDOs? These were the mortgages that were bundled, sliced, and transferred from banks to investment brokerage firms. Then various investors, companies, households, could indirectly participate in the CDOs by purchasing stock in the companies, such as Goldman Sachs, that held them.

With CDOs it is not necessarily a purchase of risk, nor are they being sold necessarily to avoid or mediate risk. Instead, what is being purchased is an income stream. What is being sold is a loan; the income stream is being given up for portions of pennies on the dollar. In other words, for example, the bank sells a $300,000 loan at 7 percent interest, 30-year mortgage. In thirty years, 360 payments would be made, for a grand total of $718, 526, or $300,000 in principal and $418, 526 in interest payments. It is easy to why someone would pay, say $1000 dollars today, for an income stream of $418,526. But why would a bank sell for $1000 an income stream of $418,526? Very simple, because they get $1000, plus the $300,000, which they then loan out again. Thus, they get to both keep and eat their cake, because the bank simply loans the $300,000 to another borrower at 7 percent and they have both a $418,525 income stream and the additional $1000 (of course they didn’t just sell once but 1000s of times). This process is not the commodification of risk. Rather it is what Marx describes in chapter 21 of volume three of Capital, whereby the expectation of the relative stability of the “value-in-process”, or the expected stability and reproduction of the capitalistic system turns money itself into a commodity. What is for sale is simply the ability of money to create “an income stream.” What is for sale is not risk, but the power (and legal right) to exploit as an absentee holder of an “asset-backed-security.”

The authors go on to apply their insights to the analysis of the Euro area (181-222). In desperate brevity the authors argue that various and persistent imbalances within the Euro area are manifest from the neo-liberal agenda to make Europe an attractive area with favorable conditions for capital. This agenda has created rapid growth rates for the “peripheral” European nations, current account imbalance, financial account imbalances, etc., within and between Euro area economies. Ultimately the authors’ interpretation is that the Euro has imposed an intensified mode of exploitation on European workers, hence is best understood as an expression of Marxian class struggle. The final point being simple and provocative: Creating conditions for capital that are very favorable for the realization of surplus value has generated economic and financial imbalances, manifesting instability and financial and sovereign debt crises. “The only viable route for coping with emerging imbalances without violating the neoliberal nature of the EU is austerity” (219). Austerity and fiscal budget battles become the battle ground for the class struggle, while the neoliberal activities prior to austerity are the causes.

This is a provocative book with excellent Marxian insights. However, the book is not adequately edited, and the flow of the argument I found at times difficult to follow.

In my estimation the authors are too anxious to differentiate themselves from other Marxian and non-Marxian heterodox theorists. Of course this can be important. But too often the differentiation is remarkably superficial and obtuse. For example, the authors claim several authors including Wolff and Resnick (2010) support a “Malthusian version of underconsumption” (138, and also 241, n. 6).

Likewise, the authors maintain a number of Marxian theorists see the crisis as a function of long-term profitability. However, a number of these theorists, for example Foster and Magdoff (2009) hardly see the fall rate of profit as the cause, but as part of the structural dynamic of contemporary capitalism (139). They make the following claim (241 n. 7): “The key idea of this [long-term profitability] group is captured by Foster and Magdoff (2009: 108); ‘financialization is merely a way of compensating for the underlying disease affecting capital accumulation itself.” This hardly concerns long-term profitability, but for Foster and Magdoff stagnation concerns the unsuccessful reabsorption of surplus value into a system of expanded reproduction. This manifests massive contradictions quite similar to the authors’ analysis of the Euro area. Such ungenerous interpretations are perplexing and distract from the authors’ contributions.

These criticisms aside, the authors have made an important contribution to Marxian monetary theory and political economy. Their contributions will be welcomed and highly regarded.