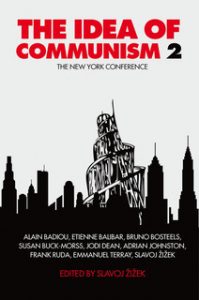 Slavoj Žižek
The Idea of Communism 2: The New York Conference

Although there is no clear sign that capitalism is drawing towards its Abendsonne, something novel does nonetheless seem to be appearing upon the horizon. Edited by the Slovenian philosopher Slavoj Žižek, this volume gathers together nine new interventions on the idea of communism. Each intervention is penned by a more or less reputed figure who, fundamentally dissatisfied with ‘the infernal self-propelling machine of Capital’ (Žižek, 178), views an actualisation of the communist idea as the imperative for the 21st century – a century which, for all intents and purposes, has yet to begin.

Of course, any contemporary embryonic attempt to actualise communism must tackle the serious task of reassessing its idea. Hence the purpose of the conference series from which this second volume stems: to determine the haecceity of the communist idea – this newness upon the horizon – given our conjuncture in late capitalism, and given the idea’s betrayal by past historical attempts which failed catastrophically to enact it.

Whilst varying considerably in the topics that they treat, there are a certain number of general features which serve to fasten the volume’s nine interventions together. At the heart of the volume pulsates a strong feeling that communists should not be made to feel ashamed – despite world-historical events of the past – for desiring a radical reorganisation of society in light of the present (dis)order of the world. But beyond this commendable relinquishing of the shackles of diffidence and of regaling ridicule, there is perhaps a more important fastening feature here, itself tied to the undertaking initially bringing about the volume in the first place. This is an undertaking of exploring the possibility for a new beginning for communism (vii). But where, or, more precisely, with what, does such a new beginning begin?

What can be garnered from the volume is that this exploring the possibility for a new beginning is no more than an exploration into the possibility for producing communist subjects, or communist forms of life: from what this subject ought to desire (Jodi Dean), ought to recall or remember (Frank Ruda), to the temporality it ought to live by (Alain Badiou).

Even if unwitting at times, this particular focus on producing emancipatory subjectivisations certainly makes sense. Indeed, one might be justified to think that it be acts of radical subjectivisations along the lines of these “oughts” that would set in motion the real movement which abolishes the present state of things. So what of these (perhaps axiomatic) oughts supposed to inscribe the flesh of a specifically militant subject?

Before anything else, the volume presents its reader with an abstract cover-image of the Russian Constructivist Vladimir Tatlin’s Monument to the Third International (Verso’s adopted symbol of the positive supersession of capitalism). Tatlin’s Tower – which aptly enough was never constructed – is seen as immanently emerging from, yet all-the-while transcending, the silhouetted skyline of a repetitive, exchange-driven, commodity-acculturated mega-city. In the volume’s sixth contribution, the American philosopher Adrian Johnston supplies an innovative disquisition into material being, proffering a re-worked, non-reductive Marxist philosophy of nature.

Johnston’s intervention serves as an explanation as to the importance of the above image of the monument in relation to a specifically communist subject – indeed, explaining how this or any other subject is materially possible at all, firstly, and, secondly, how such a subject itself ought to understand material being as material being.

According to Johnston communists ought to be transcendental materialists. That life, cities, monuments, ideals, that human consciousnesses exist at all; that all this we experience is, is so because, ultimately, material being makes way. For Johnston, such a claim entails insisting that more-than-material transcendences – “Spirit” in German Idealist parlance – immanently emerge from cracks and splits residing in material being itself (104). This move away from the determinism characteristic of classical dialectical materialism, with its ‘mechanistic, reductive, and/or eliminative metaphysics’ (107), toward a transcendental materialist account of the emergence of human consciousness, is important for two reasons.

First, Johnston tells us that this intervention fills a missing piece in Marxist reflection on the relation of matter and human consciousness. He argues persuasively that transcendental materialism – the name he gives to this re-evaluated Naturdialektik – acts to supplement a lack in historical materialism. In their tendency to stress continuity over discontinuity, Marx and Engels failed to show that the human being was a discontinuity internal to nature itself; that is, for Johnston both men failed to provide a truly ‘dialectical-materialist account of the immanent natural genesis of […] active human subjectivity’ (113). Transcendental materialism accounts for this discontinuity and its dialectical interaction with nature, and thus its an essence as subject-object of labour, by positing its possibility of existence as lying in a material being that is itself an internal production of discontinuities (116).

Second, with its utilising recent discoveries in biology and neuroscience such a move brings us closer to a much needed Marxist re-engagement with the natural sciences. The penchant to reduce the natural sciences to an incurable complicity with the ‘irrational rationality of fully administered worlds’ ultimately weakens Marxism’s hand, Johnston argues (133). Instead of critiquing from positions placed outside of fortressed gates it is imperative that communist subjects perform critiques of the natural sciences that are really worth their salt, immanently unlocking from within the potential of these sciences to interrupt naturalistic reductionisms which protract economic exploitation and intensify resignation (108-9). The importance of this restored quasi-naturalist Naturdialektik which historicises nature in a manner similar to the Darwin event, is accentuated in the volume’s seventh intervention.

We are told in Frank Ruda’s contribution that a communist subject ought not to naturalise impossibility, freedom, nor lives lived without an idea (146, 151). By turning to discussions of Plato’s Idea, Descartes’ cogito and Hegelian dialectics – so-called “impossible” truths, Ruda explicates his philosophical position. This is a position driven by what Ruda calls a meta-critical anamnesis, and is one which, he says, aims at ‘remembering communism.’ (166) In confronting the problem of freedom a meta-critical anamnesis holds that, contrary to human rights discourse with its naturalisation of the human animal’s freedom, freedom is in fact a-natural. Freedom for Ruda is not some-thing given; we are not born with it but rather it ‘demands a true choice, hard work, discipline and strict organization in pursuing its consequences.’ (151) The indifference a human animal may show for freedom can be avoided only if it is constantly re-called that freedom is a-natural and is thus some-thing which demands a de-cision. Indeed, a communist subject is one who ought to challenge such indifference by remembering that it is ‘in our nature to be able to do the a-natural, the impossible; that we are able to live under an idea.’ (155)

In the volume’s fifth intervention Jodi Dean reflects more politically upon this notion of freedom qua a-naturality, confronting the psychoanalytic category of desire and desire’s relation to the impossibility of collective emancipation. Indeed, a subtle shift in emphasis on whether or not the impossible is obtainable is witnessed in this intervention in contrast to Ruda’s. Through reading Benjamin’s ‘Left-Wing Melancholia’ (1931) and Freud’s 1917 paper on mourning, Dean suggests that leftists have only now begun to emerge from a sustained period of melancholic accommodation with neoliberalism, beginning once more to desire something like the impossible (87-9).

Desire for this impossibility is communist desire; it is a collective yearning for a “we”. But as a desire consciously ‘built around a lack’, it is one that ‘recognises the impossibility of reaching or achieving its object’, Dean says, and yet holds on to its object nevertheless, ‘refusing to cede it.’ (93) A communist desire thus ‘subjectifies its own impossibility, its own constitutive lack.’ (102)

The problem with Dean’s intervention is that it makes no attempt to differentiate communist desire from the structure of desire informing Ernesto Laclau’s post-Marxist theory of radical democracy. For example, like Dean, Laclau begins his political reflections from a Lacanian ontology of lack. Similarly, like Dean, Laclau views a subjectification which recognises the impossibility of the lack’s overcoming as constituting the true terrain of egalitarian politics.

That there is little to decide here between a communist desire and a radical democratic desire seems to be a stumbling block for the intervention, particularly when, in circuitous fashion, Dean equates radical democracy with capitalist drive tout court (87). (This problem is only compounded when it is added that, beyond this roundabout aside, substantial reference to Laclau is conspicuously absent from discussion, as is Martin Hagglund’s convincing critique of radical democracy and its Lacanian adaptations.) All this is not to suggest, however, that theoretical articulation of a communist desire is not warranted; only that such a desire needs further specification.

All in all, not only is The Idea of Communism 2 accessible to its readership but the wide range of topics covered lends a certain richness to the text. I would emphasise, however, that in chiefly focusing upon the production of militant subjectivities the volume is somewhat one-sided; it neither extends nor provides alternatives to, for example, Michael Hardt’s first volume attempt at a contemporary critique of political economy. The volume is therefore slightly wanting in reflection upon the material determinations currently in existence.

Nonetheless, this is a volume not about capitalism but rather about reactivating communism in the midst of this idea’s so-called complete inefficacy. And if ‘Impossible is no excuse,’ as Jodi Dean says (87), then with its underlying assertion of our capacity for – as Peter Hallward has expressed it elsewhere – autonomous self-determination in the name of an idea, then The Idea of Communism 2 is most certainly an important collection of reflections for rekindling the strains of the red flag.