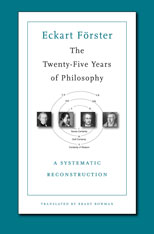 Eckart Förster
The Twenty-Five Years of Philosophy: A Systematic Reconstruction

The ‘twenty-five years of philosophy’ are those from 1781 to 1806: from the publication of the Critique of Pure Reason to the completion of the manuscript of the Phenomenology of Spirit. So what we have here is in a way another version of the ‘from Kant to Hegel’ narrative, one delivered with considerable scholarly sophistication and philosophical substance. The story Förster tells is in general terms the familiar one of how a sequence of philosophers in the 1790s and 1800s took issue with supposed inadequacies of Kant’s critical system, leading to the construction of the more radically idealistic systems of Schelling and Hegel. The real novelty in Förster’s account is the important role attributed to Goethe, in particular as a result of his Spinoza-inspired and Kant-inflected natural studies. Förster argues that Goethe’s work in this area was a considerable influence on Hegel during the latter’s Jena period, that is, up to and including the writing of the Phenomenology of Spirit.

The first half of the book is a remarkably deft presentation of the unfolding character of Kant’s critical system from 1781 to 1790, dealing with all of Kant’s main publications from that period, including the Metaphysical Foundations of Natural Science. Förster’s aim is of course to show why and how the post-Kantians were motivated to take Kant further and he therefore points up both a) the respects in which the critical system was felt to be inadequate, and b) the indications within the system itself of how these inadequacies could be overcome. It is here that Förster’s account becomes particularly interesting. We all know that the post-Kantians rankled at the limitations placed by Kant on human knowledge; that we cannot know things as they really are was felt to be unacceptable. But Förster is able to show us that there are two key ways in which Kant claims we are limited: firstly, we cannot know ‘things in themselves’, supersensible objects which are not in space or time; secondly, we cannot even know empirical natural objects insofar as they suggest purposiveness to us. In articulating both limitations, Kant adverts to the forms of cognition which would be able to comprehend such objects. With ‘things in themselves’, the alternative would be intellectual intuition, a generative form of cognition which in thinking something would at the same time bring it about. With organized natural objects, the alternative would be intuitive understanding, a form of cognition which would properly comprehend the interrelations of parts and wholes, but without having been responsible for producing them in the first place. For Kant, the point is that neither intellectual intuition nor intuitive understanding are possible for human beings; but the post-Kantians took them instead – but in different ways – as models for what human cognition ought to be able to achieve.

The more familiar strand in the story which follows is the one takes up the idea of intellectual intuition, most notably as developed in the philosophies of Fichte and Schelling. Förster’s suggestion is that this leads to over-determined responses to the inadequacies of Kant’s system, precisely in virtue of arrogating for human cognition generative powers which it cannot sustain. The more promising track is that suggested instead by Kant’s idea of intuitive understanding, and it is here that Goethe’s role comes to the fore. Goethe undertook his scientific studies, notably in botany and the theory of colour, in an attempt to attain what he initially took to be Spinoza’s scientia intuitiva, and then later recognized as also equivalent to Kant’s intuitive understanding. In Goethe’s hands, this took the form of trying to understand phenomena in terms of developmental transitions, as with the phases of growth – indeed metamorphosis – of a plant. Förster argues that Goethe’s aspirations and achievements in this regard then started to influence Hegel as the latter’s partnership with Schelling began to weaken, culminating with the Phenomenology of Spirit (completed in 1806, published in 1807).

The concluding chapters on Hegel’s evolving thought in the Jena period are particularly rich and will obviously be of most interest to readers of the Marx and Philosophy Review of Books. The main points here are as follows. First, Förster provides new evidence and arguments for the claim that Hegel originally intended to write a five-chapter introduction to his system called the ‘Science of the Experience of Consciousness’ and only subsequently decided to expand the work into the eight-chapter book published as the Phenomenology of Spirit. Second, Förster also argues – if very briefly! – for the integrity of the five-chapter ‘Science of the Experience of Consciousness’ in its own terms, that is, as successfully taking consciousness to the standpoint of ‘science’ (see 375-6 in particular). This is due to Hegel having learnt from Goethe how to comprehend developmental transitions and thus achieve a kind of intuitive understanding. Third, Förster then claims that Hegel however goes wrong in attempting to spin out a complete philosophical system from the standpoint of ‘absolute knowing’, rather than remaining true to the openness to concrete phenomena exemplified in Goethe’s nature studies; in short, Hegel regresses to the lure of something like intellectual intuition.

Förster’s aim in this book is to suggest that the idea of intuitive understanding, as elaborated in different ways by Goethe and Hegel, is the real legacy of ‘the twenty-five years of philosophy’, one however which has been overlooked even since then, largely as a result of the way in which Hegel himself reverted to an over-determined conception of philosophical science. Although Förster himself says nothing about subsequent developments, his account is surely very relevant to the various attempts made by subsequent Hegel-influenced radicals, notably of course Marx, to identify the ‘rational kernel’ within Hegel’s philosophy. And it is perhaps not too far-fetched to see Marx as in effect using the Goethean-Hegelian model of intuitive understanding in the Grundrisse and Capital. This could well be a very rewarding area for future research. In the meantime, I would strongly recommend The Twenty-Five Years of Philosophy to anyone interested in classical German philosophy.