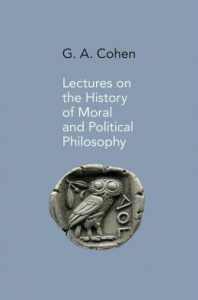 Lectures on the History of Moral and Political Philosophy is the third and final volume of the late G.A. Cohen’s previously-uncollected papers. The first volume, On the Currency of Egalitarian Justice, and Other Essays in Political Philosophy (reviewed 2011), provides an effective overview of Cohen’s views on egalitarian theories of justice—in particular, his concern that many such theories were not nearly egalitarian enough. The second volume, Finding Oneself in the Other (reviewed 2013), ably introduces the reader to Gerald Allan Cohen, the man; the writings collected here work well as a serviceable, if incomplete, biography. Lectures on the History of Moral and Political Philosophy offers yet another angle from which to approach its subject—not Cohen the egalitarian, or Cohen the man, but Cohen the critic. This Cohen is worth getting to know just as much as the previous two.

The final essay in this book is ‘G.A. Cohen: A Memoir,’ written by the volume’s editor, Jonathan Wolff. In this essay, Wolff praises Cohen’s massive contribution to political philosophy, comparing it to that of John Rawls or Ronald Dworkin. And yet what Cohen contributed was very different from what Rawls or Dworkin did. Cohen never produced a work like A Theory of Justice or Sovereign Equality. Instead,

Cohen considered himself more a reactive than an individually creative philosopher. In this his skill was unrivalled. His style is often that of an expert demolition worker: finding what might look like a rather banal difficulty, but probing and probing until the edifice collapses. Cohen knew exactly where to locate his criticism, and how to develop it to greatest effect. At first sight the criticisms can look pedantic or fussy, but as the arguments develop, something of great power emerges. Those who have the instinct to defend the views he attacks find themselves with a much more difficult task than they first assumed (342-3; see also 337).

Cohen’s strength was not the development of a systematic position, but critical engagement with the positions of others. A very different strength from that of Rawls, but no less valuable.

This critical engagement is on full display in Part One of the book, which is also the longest part. This section collects Cohen’s previously unpublished lectures on the history of political philosophy, including lectures on Plato, Hobbes, Locke, Hume, Kant, Hegel, and Nietzsche. As Wolff notes, Cohen’s approach here is fundamentally different from that displayed in Rawls’ two collections of lectures on the history of philosophy:

Rawls aims to give a fair and comprehensive overview of the figures he discusses, identifying their strengths, and, regretfully, pointing out their limitations, though generally assuming that great philosophers do not make obvious mistakes, and so reinterpretation is called for. Cohen, in contrast, essentially discusses those things that interest him. Cohen records … his engagement with the figures he discusses. Yet in doing so he locates, and provides his unique perspective on, some of the central concerns in the thought of the philosophers he engages with, almost all of whom can be convicted of mistaken arguments or positions that are flawed in particular ways (x).

This approach will not suit every reader. A novice reader might easily get lost here. But an experienced reader comfortable with the philosopher under discussion may well gain an epiphany or two about that philosopher, a new insight into either what the philosopher thought or why he was wrong to think it. And Cohen, unlike Rawls, is not reluctant to point out when a philosopher goes badly wrong.

Two examples will illustrate Cohen’s approach in these lectures. In his discussion of Plato, Cohen denies that the Republic properly qualifies as totalitarian. Totalitarian states are deeply concerned about the personal lives of their citizens, but Plato cannot be bothered to show that much concern about the non-guardian classes so long as they stay out of politics. Rather, ‘the Republic is a combination of totalitarianism for the guardians and authoritarianism for the masses’ (36). (Cohen’s treatment of the totalitarian/authoritarian distinction, while brief, is infinitely easier to understand than anything ever written by Hannah Arendt.) Later, Cohen ably catalogues the centrality of consent to Hobbes’ argument. In the process, he develops a devastating line of criticism. Hobbes holds that the subject is obliged to obey the laws of the sovereign. The subject has consented to the sovereign’s rule; this implies that the sovereign’s laws are effectively laws authored by the subject; and the laws authored by the subject are binding upon her. But Hobbes also believes that the sovereign is not bound by his own laws, even though he is obviously the author of them (98-102). Nobody ever said consent theory was easy. (In chapter 12, Cohen develops this argument further as part of a critique of Christine Korsgaard’s moral theory.)

Cohen’s lectures, however, very much follow his interests. Where his interest is lacking, it shows. Consider, for example, his treatment of Locke and Hume. Cohen took very seriously the central idea of Locke’s political theory—the idea of a social contract as a way of preserving people’s just holdings, holdings which stem from individual self-ownership. As a Marxist, Cohen regarded economic exploitation as a form of theft, whereby the capitalist unjustly appropriated some of the worker’s labor. (Some philosophers, notably Allen Wood, deny that Marx regarded exploitation as unjust; chapter 11 of this book reprints Cohen’s critical review of Wood’s position.) He seemed to believe, as Wolff notes, that something like self-ownership ‘underlie the Marxist opposition to exploitation’ (336). It was this belief that motivated his searching critique of Robert Nozick, who took the idea of self-ownership in radically different directions. And so Cohen had ample reasons to give Locke careful and sympathetic attention. Hume, on the other hand, was quite dismissive of Locke, especially the idea of a social contract as the sole source of political legitimacy. This leads Cohen to be equally dismissive of Hume; his lectures on the Scottish philosopher are uncharacteristically careless.

Even when Cohen displays genuine interest in a philosopher, the results can be vary quite a bit. Cohen’s fascinating exploration of Plato, Hobbes, and Locke is greatly helped by the clarity with which all three authors wrote. Even Kant, while difficult, is clear enough to subject to critical examination. (Cohen argues that Kant distinguishes the way in which the ‘moral realm’ is cut off from ‘the realm of desire’ in twelve distinct ways, which Kant treats as synonymous; see 153.) But what of philosophers not known for the transparency of their prose, such as Hegel and Nietzsche? Here Cohen seems content simply to explicate their positions, without asking any tough questions as to whether those positions are defensible. Cohen spends considerable time laying out Hegel’s master-slave dialectic, for example, but the closest he comes to evaluating Hegel’s argument is a rather lame entreaty not to dismiss the entire thought experiment out of hand (199). The reader is left to fend for herself much more here than elsewhere in the lectures.

And what of Marx? As Wolff notes, most of Cohen’s lectures on Marx (and also Hegel) have already appeared in print, usually after being developed into books (vii). Cohen’s previously-published papers on Marx have largely been collected into books as well. As a result, the papers on Marx collected in Part Two of this book seem like a bit of a grab bag. There are two early papers dealing with the different ways in which capitalists and workers are alienated under capitalism (chapter 8) and internal consistency of Marx’s concept of ideology (chapter 9), respectively. There is a response to Jon Elster’s critique of functionalist explanation in Marx (chapter 10). And there is the critical review of Allen Wood mentioned earlier (chapter 11). All four essays are excellent sources for the student of Marx, but they are mostly concerned with explication, not defense, of Marx’s views. Moreover, they do not relate together in any obvious way. And so the reader will not get a very systematic picture of Cohen’s Marxism from this collection; the definitive anthology of Cohen’s Marxist writings has yet to be produced.

What this collection provides, then, is a very idiosyncratic tour of the history of moral and political philosophy. The tour is very selective as to where it stops, and when it does stop it is equally selective in the sights it shows. And so it’s not a tour I’d recommend to a complete newcomer to the area. But for the experienced traveler in this intellectual terrain, the sights on the tour are, almost without exception, well worth the extended stop provided. One could do much worse for a philosophical tour guide than G.A. Cohen.