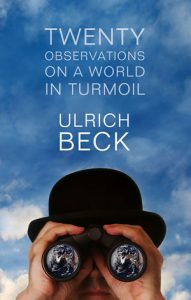 Ulrich Beck
Twenty Observations on a World in Turmoil

I’m genuinely not sure what to make of Ulrich Beck’s Twenty Observations on a World in Turmoil. On the one hand, the book collects twenty essays ‘published in leading European newspapers between 2009 and 2011’ (xi). This suggests that the book will offer a handful of (hopefully interesting) observations about world politics aimed at a mass audience. But on the other hand, at the start of the book Beck announces ambitions that are much less modest than this. Indeed, Beck promises in the book to introduce an idea that is nothing short of revolutionary—global domestic politics. ‘Weltinnenpolitik, “global domestic politics,” the concept I am introducing and developing, is much more than a political theory, a philosophical utopia (or dystopia), a governance programme or a state of mind: it is the reality of our times’ (viii). Sounds incredibly important to me. But wait—there’s more! ‘Global domestic politics,’ he continues, ‘is therefore a perspective, a political reality and a normative idea. And it is the critical theory of our times since it challenges the most profound truths which we hold dear: the truths of the nation’ (Beck’s emphasis; viii-ix). I was not totally sure I was prepared to handle an idea of such cosmic importance, but I proceeded to read the rest of the book nonetheless, anxious to learn just what ‘global domestic politics’ was and how it would revolutionize my understanding of the world. I was a bit disappointed.

The term ‘Weltinnenpolitik,’ or ‘global domestic politics,’ was apparently first introduced by Carl Friedrich von Weizsäcker in 1963. He used the term ‘in a philosophical sense,’ but Beck has different ideas. ‘I lend this word a new sociological meaning. The question one needs to ask is “What is global domestic politics?” rather than “What should global domestic politics be?”’ (ix) Elsewhere, Beck points out that in his book ‘“global domestic politics” does not have the meaning of a normative concept in philosophy and political theory but refers instead to a rampantly spreading, wild reality above, below and between the national borders which continue to dominate minds and institutions’ (139; see also 144). He displays nothing but contempt for normative theorizing about global justice; ‘I propose,’ he writes, ‘to distinguish between philosophical cosmopolitanism, whose spiritual home is cloud cuckoo land, and a “really existing cosmopolitanism”’ (84). Here Beck is clearly echoing Marx and Engels’ distinction between ‘utopian’ and ‘scientific’ socialism, the latter of which has the actual laws of history on its side. Of course, Marx and Engels wildly overstated their level of understanding of the direction of history; it’s 165 years since the Communist Manifesto was written, and we’re still waiting for that proletarian revolution they claimed was imminent. Could Beck be similarly overselling the power of his big new idea? Let us see…

Just what does ‘global domestic politics’ have to tell us about the ‘rampantly spreading, wild reality above, below and between the national borders which continue to dominate minds and institutions?’ As far as I can tell, Beck’s main point about this reality is that it exists. As the banking crisis demonstrated, the consequences of human activity cross national borders more than ever before. Awareness of this fact is growing, and so citizens increasingly enter into politics with an eye to influencing global affairs. A good example of this phenomenon, according to Beck, would be Occupy Wall Street. This movement, he writes, ‘might be the birth of a new “Weltbild”, a new world view—namely, global domestic politics—because such protests and projects are typically justified in the name of “humanity” and “the planet”’ (x).

And so global domestic politics seems to involve a hodgepodge of different agents interacting at different levels. Those agents must take into account both national and international institutions, of course. And presumably, that interaction may lead to changes in those institutions. But Beck’s attitude towards institutional change is extremely hard to figure out. In his examination of NATO’s police actions, for example, Beck writes that ‘To castigate this as a violation of international law (as parties on the right and the left of the political spectrum are doing) is not only blind to history but more than anything fails to recognize the interdependencies and obligations generated by global domestic politics’ (23). This just seems confused to me. It’s one thing to ask whether or not NATO’s actions are illegal under current international law; it’s quite another to ask whether or not current international law is adequate to serve the demands of an increasingly globalized world.

This might be what Beck has in mind, but then he also offers passages like the following:

Thus the ash cloud recapitulated the political didactic play presented over and again by the financial crisis and by the terrorist attack of September 11, mad cow disease and many other examples: it could be so much easier if people, interest groups and politicians abandoned the antiquated notion of national sovereignty and recognized that sovereignty can be recovered only through global domestic politics based on cooperation, consultation and negotiation. (79)

This passage suggests that the troubles caused by globalization do not demand new institutions at all; instead, they demand that nations recognize that they should, out of enlightened self-interest, work together with other nations. Nothing about creating new institutions here. Indeed, the very idea of ‘recovering sovereignty’ seems at odds with any call for the creation of new international institutions, given that such institutions could only restrict national sovereignty further. Perhaps Beck has in mind the creation of some kind of global sovereignty. Or perhaps Beck was simply going for a clever turn of phrase, without regard for how the resulting passage fits together with the rest of his argument.

These comments on Twenty Observations on a World in Turmoil may seem a bit churlish, uncharitable, or simply picky. But they are intended to highlight the central problem with the book. The twenty essays collected here offer some moderately interesting, if unexciting, reflections about various problems facing the international community. They are certainly the kind of essays one would expect to see appear as newspaper editorials written by a prominent academic. But they most definitely do not deliver what Beck promises in the introduction. This is not ‘the critical theory of our times.’ It is not ‘much more than a political theory, a philosophical utopia (or dystopia), a governance programme or a state of mind.’ Indeed, it is much less. The only overarching point being made here is that globalization is happening, and it is changing things—a point so banal and obvious it’s almost embarrassing to state. The problem with Twenty Observations on a World in Turmoil is not its modest contents, which are perfectly appropriate for a collection of newspaper editorials. It is the yawning chasm separating those contents from the book’s stated ambitions.