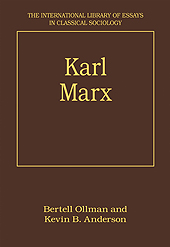 This collection of articles is an excellent source for contemporary Marxian social analysis. It is an anthology of thirty four articles addressing a wide range of topics. This collection of articles well illustrates the relevance and depth of Marxian analysis. It is an excellent reference. Its intended audience is primarily young theorists interested in the application of Marxian social theory.

The financial collapse of 2007-8 generated a resurgent interest in Marx. Marx is certainly a deep and fruitful resource for topics of political economy. One quickly discovers much more. Marx is a social theorist and philosopher par excellence. Marx develops theories about history and its movement (see 497-537). He had a deep interest in the relationship between social institutions and human motivation (see 346-401). He developed important insights into the human consciousness and how our beliefs are shaped and formed (see 3-130). He theorized about culture and religion (see 405-93). Marx understood that capitalistic-state politics and power offer us impressive inspiration for explaining phenomena such as imperialism (see 183-237), colonialism, slavery and race relations (see 541-63). His ideas have been further developed and extended to understand gender relations (see 565-605) and the relationship between human beings and the natural environment (see 609-51). Marxian social theory and philosophy is a perceptual shift, self-transformational, and (potentially) liberating.

Each of these articles was written in the twenty-first or twentieth centuries. Each article stands on its own and provides the reader superb scholarship and impressive insights. The real value of this volume is its totality. What the editors, Bertell Ollman and Kevin Anderson, have accomplished is a brilliant demonstration of the interconnections of social being. The fragmentation in academia is severe. Too often in social science various phenomena are isolated and the aim is to understand phenomenon independent of a greater totality. This anthology is a dazzling collage-like demonstration of how to approach social being in a more totalizing way.

The volume is more than 650 pages long, thirty four articles, and divided into eight parts. It will be impossible to do justice to each author. Neglected will be three essential excerpts from Marxian historians (497-537) (all of which are from classic books of Marxian history) and four articles on colonialism, race, and gender. All of which will surely be of great interest to many readers. Likewise, I will not be able to do justice to all of the articles on “culture” (395-401, 425-93), crime (375-84), and civil society (349-73).

Perhaps the best place to begin is Marxian ecology. John Bellamy Foster (609-21) argues against commentators who claim Marx was “anthropocentric and unecological” (619). Instead Marx was acutely aware that capitalistic organized production generates an “irreparable metabolic rift” between “human beings and the earth” (611). Marx’s historical vantage point was advantageous in witnessing the transition from feudalism to capitalism and early industrialization (609). Marx and Engels witnessed this ecological devastation of capitalistic social relations from the agricultural overproduction and soil-fertility deterioration, deforestation, desertification, climate change, the elimination of deer and other wildlife, the commodification of animals, pollution, industrial smog and wastes, toxic contamination, exhaustion of coal mines, industrial disease, and stunted growth of industrial workers (612).

Paul Burkett (623-51) argues the Marxist tradition has been attentive to sustainability of human development and economic production. The communistic vision has always beheld a view toward overcoming the “metabolic rift” between human beings and earth caused by capitalism (634). The “irreparable metabolic rift” is a significant part of the reason that capitalism is no alternative (625). Overcoming capitalism is to overcome its “anarchy of production” and tendencies of “overproduction”, crisis and ecological deterioration (637). Sustainable human development not only changes relationships in the workplace, but increases leisure-time (638) and promotes the possibility for greater awareness and understanding of the relationship between nature and human beings (645-8).

Immanuel Wallerstein (183-211) offers readers his thesis that the “underdeveloped” world is kept underdeveloped by the very mechanisms of international capitalistic relations. The “core” is instituted to dominate the “periphery” nations. This is an enormously important argument to begin to understand so-called “underdevelopment” and global poverty and inequality. David Harvey’s “new imperialism” thesis (213-37) complements Wallerstein’s core/periphery thesis, but additionally argues that international capitalistic competition has diminished U.S. hegemony. This has led to strategies of political and monetary manipulation, manifesting political unrest and war. Harvey warns “imperialism abroad cannot for long be sustained without active repressions, even tyranny, at home” (232).

If Wallerstein and Harvey remind us the economic is always necessarily political, and international relations always affect domestic relations, the other two articles in Part II demonstrate capitalistic political economy is necessarily all too personal. Martha Gimenez (155-9) argues unpaid-labor is becoming more ubiquitous through “self-sourcing.” The self-service phenomenon has been a way for firms to decrease costs, get more hours of work, and increases unemployment. Fred Perlman (161-82) splendidly argues everyday actions of survival simultaneously reproduce social relations of “daily life.” He impressively ties together the Marxian notion of reproduction, with alienation, commodity fetishism, exploitation, theory of surplus value, with the transformation of living activity into capital as a power-relation.

Part III turns to the issues of politics and the state. Michael Parenti (241-62) argues that the U.S. constitution was (and is) an “elitist document” designed to curtail and contain democracy and the “perpetuation of” bourgeois “class power” (255). Karl Renner (289-93) demonstrates the relationship between economics and the creation of legal norms. Franz Neumann (263-72) makes the connections between the rise of big powerful corporate firms and the rise of fascism as a political solution to the economic difficulties corporate capitalism generates. Vincent Navarro (273-88) argues that since 1980 neoliberalism has sharpened the class struggle between international dominant and subordinate classes. Inequality is emerging between “core” and “periphery” nations, and between the domestic-dominant-class and working classes. Moreover, contrary to the anti-statist ideology, the neoliberal state is more powerful and highly interventionist (273-6) with very specific alliances with dominant class interests (283).

Ernest Mandel (315-42) contends that revolution is a permanent condition of capitalism. Capitalistic social relations generate the necessity of revolutionary politics (315), helping to explain both the war-torn “third-world” (329) or “periphery” (197), and the 1989 revolutionary era state-capitalism of the soviet bloc (332-5). Mandel insists the revolutionary potential in developed Western capitalistic “core” (197) is much higher than typically thought (323-9, 335-8). Mandel’s article is well complemented by Raya Dunayevskaya (27-39) contribution. Dunayesvskaya argues Hegel was first to understand the permanent revolutionary ontology of the new emerging (capitalistic) social relations due to the “new negative [unsustainable] phenomenon – alienated labor” (33).

The Marxian classic political debate between Nicos Poulantzas and Ralph Miliband, concerning the role, function and class-alliance of the “state”, is reproduced (295-314). The debate well illustrates the difference between Poulantzas’s “structuralist” theory of state and Miliband’s “instrumentalist” conception of state. This debate also well illustrates unresolved philosophical debates within Marxism, concerning the ontology of capitalism and its political economy, and its necessary supporting institutional forms. It further brings into focus epistemology disputes concerning whether Marxism has a methodology.

The editors reveal their own position in the philosophical disputes with their philosophical selections in Part I (3-131). Underscored are the “primacy of dialectics” and the position of Georg Lukács (3-25) that Marxist theory refers exclusively to a method (xix). The Dunayevskaya selection highlights the role of crisis and revolution, or the ‘primacy of the pathological’ as the entry point of social theory. Bertell Ollman (41-89) examines Marx’s process of “abstraction” (55-87) and theory of “internal relations” (51-5) which are argued to underlie Marx’s “dialectic.” Peter Stillman (91-115) accentuates the crucial role of critique in Marxian social theory. Critique is not only a method for demonstrating the inadequacy of “vulgar” political economists, but also generates an ontological shift in our conception of social being. Thus, according to all these contributors, Marxian dialectics are not merely epistemology, but radically ontological.

The radical ontology of dialectics is brilliantly demonstrated in the book’s cultural and historical articles.

Lukács argues that capitalism obscures social reality through the process of “reification” and places commodity fetishism at the very core of Marxian social theory. For Lukács the process of reification transform workplace relations such that they come to resemble relationships between things (3-12), while commodity fetishism means that commodities begin to mimic human attributes and properties (12-16). However, as capitalism develops the reified relationships and commodity fetishism are not merely workplace phenomena, but penetrate into both the cultural and personal (i.e., psychic) spheres (20-3).

Capitalism, according to Erich Fromm (345-7), transforms the psychic characteristics of human beings and generates class specific orientation towards (social) reality, reminiscent of Lukács processes of reification and commodity fetishism. This is exactly the type of human social processes Ollman intends to examine with his theory of internal relations (51-5). Max Horkheimer and Theodor Adorno (405-23) argue that the cultural industry of capitalism diminishes creative imagination and generates a pro-capitalist conformist social orientation and obscures social reality. Fredric Jameson (437-53) contends the commodification of cultural and the dominance of the marketing-effort of capitalism flatten feelings making the “cultural logic of late capitalism” highly impersonal and manifesting social euphoria of mass purchase and mass consumption. Michael Yates (385-94) updates the psychological injury capitalism inflicts on individuals by focusing on the real sense of insecurity, anxiety and fear within US working class populations during the “boom” Bush-era economy just prior to the 2008 crisis. The fears and anxieties of the working-class are, according to Yates, “like indelible tattoos” on the psyche of working people and their children. “The dullness of mind and weariness of body produced by assembly line, store, and office do not go away after the union comes to town” (394).

This volume offers a totalizing conception of contemporary social being. What is most impressive is its demonstration of the relevance and urgency of Marx for understanding contemporary human dilemmas. It is not simply that capitalism is failing to function properly for more than 80 percent of the population, generating massive income inequality and poverty, and recurrent financial panics and socioeconomic crises. Capitalism is a master/slave-like power-relation that generates permanent underdevelopment, imperialism, political tension and wars, and is destroying the ecology with its “irreparable metabolic rift” between human beings and earth; it manifests a commercial, one-dimensional culture that impoverishes personal human development, creativity and imagination. Personal injury is endured by the psyche of adults and children alike. In short, this collection of Marxian social theory and philosophy luminously and fiercely demonstrates CINA, i.e. capitalism is no alternative.