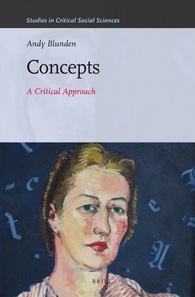 Andy Blunden is an independent scholar in Melbourne, Australia. In his previous major study, An Interdisciplinary Theory of Activity (Brill 2010), he presented a critique of Cultural-Historical Activity Theory. In his recent book, Blunden offers a critical review of different theories of concepts in cognitive and cultural psychology, analytical philosophy, linguistics and several other disciplines.

It is very difficult to provide one, even complex, definition of a concept; additionally, approaches to concepts have considerably evolved in time and across disciplines. Blunden notes in the Introduction that concepts are discussed within cognitive psychology, linguistics, philosophy, learning theories, history of science, to which one may add more recent developments in cognitive science, and neuroscience in particular. The author searches for some common threads, especially in psychology and philosophy; however, he also attempts to formulate his own, critical, approach. Blunden’s main aim is to ‘briefly review what has been established in the work of current researchers and by previous generations, with special attention to Robert Brandom, and then focus more extensively on two writers: Hegel and Vygotsky, finishing off with a brief summary of what I believe a concept is’ (1).

The book is divided into four, to some extent independent, parts: ‘Contemporary theory’, ‘Hegel’, ‘From philosophy to the human sciences’, ‘Vygotsky’, and a brief Conclusion. Such an organization of the material is neither fully chronological nor thematic, there is however, considerable overlap between individual chapters and parts.

Part One provides a selective overview of contemporary theories dealing with concepts, especially within psychology (from the classical theory, through analytical approaches, to the sociocultural turn), narrative theory, linguistics viewed in a very wide perspective, including the work of Piaget, Kuhn, and Wittgenstein, there is also a separate chapter devoted to the achievements of Robert Brandom and his analytic pragmatism.

Blunden observes that ‘a look into dictionaries soon makes it evident that dictionaries which simply provide definitions give the reader no real idea of the concept’ (17). One might question the possibility of explaining the meaning of ‘real idea’ without falling into circularity. On the other hand, contemporary corpus linguistics offers interesting new tools which might provide new insights into the linguistic makeup of concepts (and the usage of the very term). The introductory discussion of concepts mentions also the issue of categorization, and hence Aristotelian and post-Aristotelian approaches to categories, with reference to research conducted by Eleanor Rosch and contemporary achievements within cognitive psychology (prototypes, exemplars, ideals, ‘theory’ theory, semantic networks). Regrettably, Blunden does not devote more attention to cognitive linguistics, and it is cognitive linguistics which inspires different strains of research, especially stemming from George Lakoff’s theory of Idealized Cognitive Models (though there is a discussion of metaphors, with interesting critical comments on ‘embodied concepts’ vs. ‘neural structures’), and Ray Jackendoff’s Conceptual Semantics. Blunden might have also included here a discussion of Wittgenstein’s family resemblance theory (though he does mention Wittgenstein’s views on word meaning).

Chapter 3 looks at ‘Conceptual change and linguistics’ (including a brief discussion of scholars as diverse as Piaget, Kuhn, and Wittgenstein), whereas Chapter 4 is devoted to Robert Brandom, a leading proponent of analytical pragmatism. Blunden is concerned with Brandom, because the philosopher is ‘interested in what is distinctive about concept-use, rather than taking concept-use as simply a more developed form of the behavior of a trained pigeon. Consequently, he is more interested in how concepts function as premises for reasoning, rather than just as criteria for classification’ (61). At the same time Blunden voices criticism against Brandom’s theory: ‘in common with all analytical philosophy, he tries to address the problems of the human condition without venturing outside the narrow confines imposed by disciplinary boundaries, and substitutes for the important connections with other disciplines, uninformed guesses unworthy of science. Secondly, and most importantly, he has appropriated a version of Pragmatism which is blind to mediation’ (75). This criticism is not entirely fair: Brandom’s analytical pragmatism is not (predominantly) concerned with addressing the problems of the human condition (whatever that might mean within the context of pragmatism), similarly the issue of mediation seems to belong to a different theoretical tradition. As far as lack of connection with other disciplines is concerned, this again might be considered as a methodological choice rather than a flaw in the approach. Chapter 5 looks at some consequences of Brandom’s analysis for cognitive psychology.

Part Two is a self-contained presentation of Hegel’s approach to concepts, within a broad historical and philosophical context, with separate chapters on his logic (concentrating on the notoriously difficult Science of Logic) and psychology. Chapter 6 offers a critical overview of the ‘story of the concept’, with references to Descartes and Lakoff, Kant and Goethe, and various introductory comments on Hegel, who, according to Blunden ‘has presented a profound approach to the understanding of human life’ (112). Further on Blunden discusses in considerable detail the Science of Logic, Hegel’s book on concepts, ‘written as a book of logic, not psychology or sociology’ (113), and demonstrates that dialectical logic is the logic of concepts, understood as ‘actions organized around some universal artifact, word or symbol of some kind’ (115).

Inspired by Hegel, Blunden claims that ‘only a theory which takes concept to be a process is going to be able to capture the nature of concepts’ (133). Further sections of this part are devoted to other important features of Hegel’s philosophy, including ‘the genesis of the concept’ (in Chapter 8), and ‘the realization of the concept” (in Chapter 9), and his psychological investigations (in Chapter 10). Blunden concludes this part observing that ‘by the time he died in 1831, Hegel had resolved all the methodological problems in the science of concepts. He had developed a system of concepts which spanned the objective and subjective realms and a critical logic which allowed us to think in terms of processes rather than tick boxes. Hegel was one of the last great encyclopaedic thinkers whose system of philosophy spanned all the sciences of the time, integrating them into a single whole’ (178). Blunden blames the ultimate failure of the applicability of Hegel’s system on the specialization of sciences and the development of analytical science. It would be interesting to consider a detailed analysis of the legacy of Hegel as seen from the perspective of current cognitive science, with its inherent interdisciplinarity (or even ‘transdisciplinarity’) and focal interest in concepts.

Part Three, the shortest in the volume, is entitled ‘From Philosophy to the Human Sciences’, and offers two chapters, Chapter 11 on the critical appropriation of Hegel, and Chapter 12 on sources of cultural psychology. The former starts with a brief recapitulation of Hegel’s idealism, and moves on to Marx ‘who translated the arcane idealistic language of Hegel and his young followers into the language of practical life’ (189). Blunden also observes that Marx ‘understood that concepts are forms of activity, prior to their being brought to conscious awareness in theory’ (195).

Part Four is devoted to the work of the Soviet psychologist Lev Vygotsky, especially his investigations into concepts within developmental and experimental psychology. Blunden discusses Vygotsky’s idea of true concept, as applied to scientific concepts, noting that Vygotsky considered the concepts of Marxist social sciences as the paradigm of a true concept. Important sections of this part discuss methods for investigating concepts and the development of concepts (mainly in ontogeny), concepts within a system, concepts and activity, and concepts in material culture. As Blunden concludes, Vygotsky ‘has shown how our concepts are shaped by participation in the life of a real community’ (289).

After the critical review of earlier attempts, equipped with insights from Hegel and Vygotsky, and assuming that the human mind is an indivisible whole, Blunden provides in the Conclusion his own description of concepts. According to him ‘A concept is the sum of all meanings it produces, but the meanings have to be taken in the context in which they are produced. A concept may be realized in quite different meanings according to whether a person has to give an instant definition, recognize an object, use the concept to complete a categorization task, write an extended essay on the concept, evoke the concept in the intellectual action of some kind or is simply mistaken’ (292-3), the author further stresses that ‘every concept is a family of concepts, because the original social context passes and the concept takes on a life in other contexts and other projects […] Concepts exist only within whole systems of concepts’ (293-4).

The reviewed book offers an interesting addition to current multidisciplinary research devoted to concepts. Blunden provides a fresh reappraisal of Hegel’s achievement, a stimulating and critical, even if highly idiosyncratic, discussion of Brandom’s analytical philosophy in relation to cognitive psychology, and an important reexamination of Vygotsky’s psychology and its continuing influence on contemporary research. The concluding remarks sound like a (somewhat idealistic) manifesto with hints for further research: ‘A concept is the nearest thing human beings have to eternal life. To realize a concept and nurse it into the world is the best we can do. A concept means a change in social practice. Isn’t everything that happens in history, and goes on to become more than a footnote, marked by the launching of a new concept?’ (298).