Marx & Philosophy Review of BooksReviews‘Constellation: Friedrich Nietzsche and Walter Benjamin in the Now-Time of History’ reviewed by Élise Derroitte 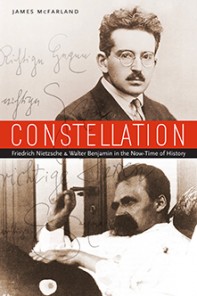 James McFarland
Constellation: Friedrich Nietzsche and Walter Benjamin in the Now-Time of History

Élise Derroitte is a Post-Doctoral researcher at the University of Louvain-la-Neuve. She is …

The ambition of this book is to reconstruct the intricate relationship between Nietzsche’s and Benjamin’s philosophies. It follows the temporality of the Benjamin’s and patiently reconstructs the Nietzschean influence on this author, and, more originally, provides an account of how Benjamin’s theories illuminate some of Nietzsche most influential ideas. The methodology, announced from the beginning, is a patient commentary of the affinities between both authors (xi), not the demonstration of Nietzsche’s univocal influence on Benjamin.

The greatest merit of the book is to confront the ambiguities of the reception of this relationship. The question of the paternity of the ideas that Benjamin appropriates has always been disputed in the history of his reception. From the constitution of the Gesammelte Schriften until now, the afterlife of Benjamin’s writings is torn between the different fields of analysis of his receptors. The reception of Nietzsche’s influence follows the same fate. Some see in the author of the Birth of Tragedy the initiator of Benjamin’s radical method while others consider Nietzsche to be a bourgeois thinker misappropriated by Nazi ideology. McFarland bypasses these sterile debates and deepens his investigation into the manner in which these philosophies illuminate each other. His research does not limit itself to the most famous and direct references to Nietzsche in Benjamin’s oeuvre such as the critique of the Birth of Tragedy in his Trauerspielbuch or the way the latter uses the notion of eternal return in the Arcades project. McFarland patiently excavates every mention and reference to Nietzsche’s thought in Benjamin’s work. He meticulously reconstructs the genealogy of its reception and, thus, his text contributes to the effort to enrich Benjamin’s contemporary philosophical interpretations.

The book begins with the influence Nietzsche has on the theories of the reform of education in Benjamin’s early writings. This period is certainly the moment where Nietzsche’s ascendancy is the more clearly felt in Benjamin’s works. The former is, in the latter’s imagination, the advocate of a culture of youth that will create new conditions of experience, and that will lead the creation of a new age of history. McFarland tells the story of Benjamin’s first commitment to the youth movement and his romanticism in the belief in the overcoming of the past through the creation of a new culture; romanticism that crashes with Heinle’s suicide in 1914. This anecdote marks the transition to Benjamin’s adult writings and the Trauerspielbuch.

This first chapter sets the tone for the rest of the book. McFarland’s main purpose is to underline the deep knowledge Benjamin has of Nietzsche’s work, not only as one of the figures of a time, but as a real companion for the critique of the twentieth century. The main regret we can have concerning the inscription of Benjamin’s philosophy in the Weimar period is that McFarland stays focused on the biographical description of this moment of Benjamin’s life rather than showing how this early production consists in a specific involvement he had with the debates on the reform of education. Benjamin’s positions against the Realschule, his romantic aspiration for transformation of culture and his critique of tradition are part of a larger debate that Marino Pulliero encyclopaedically documented (Pulliero 2005, 380-96). Nietzsche’s anthropology of the Übermensch is the support of this ideal of youth that will contradict the functionalization of the system of education.

McFarland’s interpretative preferences become clearer in the second chapter on philology, in which he discusses the relations between the Trauerspielbuch and the Birth of Tragedy. However, if Nietzsche remains a reference in Benjamin’s mind but he transitions from a harsh criticism of the ideal of youth he developed in his early writings to an intense denunciation of the war and the ideal of the redemptive hero. Even though Benjamin maintains the difference between the Apollonian and the Dionysian experience of the tragic, his conception of German baroque drama has, as a prerequisite, the precise idea that there is no such thing as a modern tragedy (Benjamin 1992, 101). By underlining the acquaintances Benjamin and Nietzsche have with respect to the method they use, McFarland tends to erase the profound disagreement Benjamin has in regard to Nietzsche’s aestheticization of the interpretation of tragedy:

The interplay of Apollonian and Dionysian energy remains equally confined to the aesthetic sphere, as appearance and the dissolution of appearance. Nietzsche’s renunciation of any understanding of the tragic myth in historical-philosophical terms is a high price to pay for his emancipation from the stereotype of a morality in which the tragic occurrence was usually clothed. (ibid., 102)

The radical difference between Nietzsche and Benjamin, which the debate on the tragic emphasises, is not an aesthetical one; it concerns their very conceptions of philosophical anthropology and their philosophies of history. When Benjamin interrogates the possibility of modern dramas, when he tries to develop what a modern experience would be, he actually takes a political position concerning modern life. The aestheticization Nietzsche proposes supports the specific anthropology of the Übermensch actualized in the figure of the tragic hero while the désoeuvrement of the baroque creature embodies Benjamin’s conception of modern mankind separated from its past and vigilant towards its future (ibid., 102).

McFarland’s interpretation favouring the similarities between the two philosophers is still in the background of the author’s comparison between the central concepts of ‘untimeliness’ (Unzeitgemäβheit) and of the now-time (Jetztzeit). This topic, at the core of the project of the book, fails to produce a real philosophical analysis of the difference between these notions. He ends his description of Nietzsche’s conception of untimeliness by saying that it is “the posture that will not write ‘now-time’” (130). When he explains that ‘untimeliness’ is a transformation of the relation the present has with respect to the past and future (121), McFarland does not mention how these two key concepts imply a different conception of the living experience (Erlebnis). Benjamin describes the moment of now-time to underline the modern difficulty to construct a collective experience. The now-time is not a time of the complete and redemptive immersion in living experience, it is not Benjamin’s concept of authenticity; on the contrary, it is the demonstration of the blockage of this experience for the modern creature whereas, in McFarland’s interpretation, untimeliness concerns an extended relation to the present that reopens the possibilities of transformation. The difficulty the reader has to differentiate these two conceptions of temporality is not an isolated instance in the book. This parallel reading of similar topics shared by the two philosophers rarely reaches a point where it proposes a comparative reading of these questions, presenting the specificities of each philosophical system and the possible affinities between them (as the author himself explains, in the presentation of his heuristic key at the beginning of the book, the references Benjamin makes to Nietzsche and his understanding “[do] not exhaust the relationship between them” (7)). The construction of the book often gives large space to methodological considerations for both authors rather than describing the content of crucial ideas that, though seeming to be philologically similar, name different realities with the same word. In terms of philosophy of history, Benjamin’s conception of dialectic at standstill is a superposition of different moments of time as they are lived by the subjects rather than a way out of time or the repetition of the past. The question of the eternal return, which Benjamin inherits from Nietzsche but also from Blanqui (233), is analysed as a philological methodology rather than as a political statement (235). McFarland thereby defines the dialectic at standstill as a quasi-synonym of the notion of eternal return, smoothing out all political conflicts and incompatibilities between these concepts (236). These considerations of method are important. It is interesting to see the relation between Benjamin’s criticisms of tradition, his notion of constellation, his attachment to fragmentary writings in resonance to Nietzsche’s use of aphorisms and asyndeton, his critique of Erfahrung and his concept of untimeliness. And certainly, Benjamin’s relation to philology is influenced by Nietzschean considerations. But the emphasis that is put on these methodological resemblances hides the specificities of these two philosophies particularly regarding their conceptions of the future, their anthropology, and their definitions of religion.

Finally, the most interesting comparison with respect to their philosophies of history is found in the way McFarland understands both philosophers as theoreticians of the pre- and afterlife of events (216, 235). The author mentions Benjamin’s search for an Ur-history (235) that resonates with the notion of immediacy of the dialectic image. In this manner McFarland highlights the specific deconstruction these philosophers reserve for a linear perception of history. The past is always rectified by its survival in the present and the future is included in every act of production. The present is thus a hybrid assembly of different ages of history that produces a fragmented and non-unified now-time.

Thus, of this extensive attempt to reconstruct the pre- and post-relation between Nietzsche and Benjamin, we could say, following Benjamin, that “it is an irretrievable image of the past which threatens to disappear in any present that does not recognize itself as intended in that image” (Benjamin 2003, 391). McFarland strives against this irretrievable image of Nietzsche but, in doing so, he also reconstructs the prehistory of Nietzsche’s reception by Benjamin, retaining only the method that favours a Benjaminian understanding, and not Nietzsche’s own conflicting political positions which, had they been saved, would have threatened the author of Zarathustra to disappear.