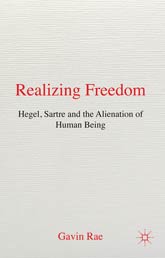 The topic of alienation features prominently in the writings of a number of philosophers influenced by Hegel. In the works of Marx, and especially his early writings, alienation is presented as a condition of estrangement from one’s true humanity, a condition in which one’s capacity to exist in a truly fulfilling and dignified manner is somehow frustrated. Such an understanding of alienation as a debased and less than fully human form of existence, or as a way of being which is untrue to one’s authentic humanity, is common to both Hegel, by whom Marx was greatly influenced, and Sartre, whose own philosophy is much indebted to Marx’s. In Realizing Freedom: Hegel, Sartre, and the Alienation of Human Being Gavin Rae examines, compares and critically assesses the respective Sartrean and Hegelian accounts of the conditions under which human subjectivity is either alienated from or authentic to its true way of being. According to Rae, Sartre presents an original and insightful account of alienation and authenticity which is nonetheless inferior to that offered by Hegel. As such, Rae aims to identify certain deficiencies in Sartre’s treatment of alienation and to argue for the superiority of Hegel’s approach to the same set of issues.

The first four chapters of Rae’s book are devoted to a study of Sartre’s theory of alienation and authenticity. The author’s discussion of Sartre focusses initially upon the phenomenological ontology presented in Being and Nothingness, and hence upon Sartre’s well-known distinction between the mutually exclusive and jointly exhaustive ontological categories of being-for-itself and being-in-itself. Rae resists any interpretation of being-in-itself as the undifferentiated unity of material reality in general, maintaining instead that Sartre’s use of the term as an ontological category is consistent with a plurality of entities which have inert self-identity for their mode of being. He also notes that being-for-itself, that mode of being distinctive of self-conscious subjectivity, is ‘condemned to be free’, due to its pre-reflective distinguishing of itself from any possible phenomenon towards which it may be intentionally directed. Rae goes on to explain, however, that while being-for-itself simply is the ontological freedom which follows from its pre-reflective self-distancing from all self-identical intentional content, it is frequently the case that individuals fail to keep faith with their ontological freedom and live instead in a manner which is, therefore, inauthentic. Hence, according to Rae, although our freedom is ontologically inalienable, we are often alienated from it at an experiential level.

Rae appeals to a related distinction between the for-itself’s reflective and pre-reflective self-understandings in order to account for the responsibility which being-for-itself has for its own alienation. Following Webber (2008), Rae maintains that being-for-itself is always pre-reflectively aware of its ontological freedom but may fail to keep faith with this self-understanding at an explicit, reflective level by identifying itself with a certain fixed identity, thereby denying its capacity to be otherwise and hence its ultimate responsibility for its actual way of being. Bad faith, the tendency of being-for-itself to flee the anxiety which comes from the recognition of its ontological freedom and self-responsibility, needn’t be the result of a deliberate self-deceit but is often the outcome of insufficient vigilance against the false comfort of apathetic resignation to one’s predicament. In either case, however, the responsibility for bad faith lies with the for-itself which remains forever capable of deciding to live in recognition of its ontological freedom.

Following a discussion of the intersubjective dimension of alienation, the threat to authentic being-for-itself which results from the objectifying ‘look’ of the other, Rae proceeds to offer an account of the Critique of Dialectical Reason, a work which, unlike many commentators, he interprets as complementing, rather than radically departing from, the position defended in Being and Nothingness. According to Rae, the Critique of Dialectical Reason elaborates upon the socially embedded and practically creative dimensions of being-for-itself which had been somewhat overlooked in Being and Nothingness. Ultimately, however, Rae concludes that Sartre’s treatment of non-alienated, socially embedded being-for-itself remains somewhat undeveloped in comparison to that offered by Hegel. Moreover, Rae complains that Sartre fails to explain the incentive for the for-itself’s decision to live authentically, renouncing bad faith and accepting the distressing anxiety which comes with the recognition of one’s ontological freedom. According to Rae, Sartre does not make clear what is to be gained by living authentically, especially when it means taking on the burden of anxiety, so Sartre’s obvious preference for authentic modes of being seems unmotivated.

The fifth to eighth chapters of Rae’s book present an account of how, according to Hegel, it becomes possible for Spirit, or historically located self-determining reason, to overcome its initial estrangement from a world of alien-seeming objects and ultimately to realise itself in a rational and harmonious community of self-determining agents mutually respectful of one another’s freedom. Whereas, according to Rae, Sartre dogmatically asserts, but does not argue for, his phenomenological ontology and its related accounts of alienated and authentic human being, Hegel takes the question of justification far more seriously and intends the Phenomenology of Spirit to rationally motivate the abandonment by consciousness of all alienating forms of self-understanding and its self-development into a non-alienated mode of being. The way to Hegel’s philosophical system is prepared by a phenomenological examination of the process by which Spirit comes to awareness of the self-undermining character of all forms of consciousness which fail to recognise the natural unity of the subject’s self-determining reason and its socio-historical being. Hence, for Hegel, the internal difficulties of alienated forms of consciousness motivate their transcendence towards an authentic mode of human being, the justification for which is therefore provided by the phenomenological process itself.

Following his account of the means by which Hegel intends, in the Phenomenology of Spirit, to lead consciousness to the kind of non-alienated perspective from which nature and society may be understood as accommodating to authentically human being, Rae proceeds to offer a survey of Hegel’s Philosophy of Right and its account of social relations mediated variously by abstract right, morality and ethical life. Contrary to once commonly-held views of Hegel as promoting either an uncritical conservative acquiescence in the inherited standards of one’s community or a totalitarian defence of unlimited state authority, Rae interprets Hegel’s socio-political philosophy as offering an account of the conditions under which the freedom of individuals may be fully recognised without the risk of social disharmony which arises with the selfish pursuit of exclusively private interests and the absence of a public commitment to the common good. Abstract right, the legal framework intended to guarantee certain universal and inviolable rights to private property and one’s own person, ensures the formal recognition of individual freedom but needs to be complemented by morality, the ethical concern to promote the freedom of others, in order that individuals do not simply insist upon their own interests and entitlements without regard for the social consequences of the pursuit of one’s self-interest.

Morality, however, is still not yet sufficient for the subject to identify with the good of its society in such a manner as to find fulfilment in the performance of social functions which contribute towards the realisation of the freedom of all. Rae devotes the final chapter of his book to providing an account of ‘ethical life’, the system of intersubjective relations between the members of a harmonious community of free individuals whose education into a tradition of public-spiritedness leads them to will the good of their community. Here the author delivers an account of the various social and political institutions which Hegel maintains are required for the harmonious co-existence of public and private interest consistent with the freedom of all individuals. Although Rae maintains that certain specifics of Hegel’s position on ethical life require clarification (such as the exact role of the monarch) or outright modification (such as the requirement that one marry and raise children of one’s own), Rae’s ultimate conclusion is that Hegel presents a more detailed and compelling account of the practical conditions under which individuals may live authentically as free subjects within a social world from which they are not alienated than is available in Sartre’s writings.

Although Marx is conspicuous in his absence from this book, the author explains early on his decision to limit his discussion to the theories of alienation offered in the works of Hegel and Sartre. The result is a highly readable, compelling and illuminating discussion of a set of issues both common and central to the philosophies of two of the most important figures of European philosophy since Kant. Realizing Sartre: Hegel, Sartre, and the Alienation of Human Being will be rewarding to researchers in modern European philosophy and shall provide an informative discussion of the Hegelian origins and Sartrean legacy of Marx’s own treatment of the problem of alienation.