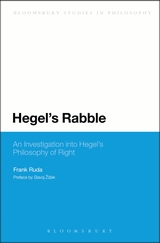 The biographical trajectory of the young Marx was undoubtedly altered by his encounter with Hegelian philosophy. The association he made with the ‘Young Hegelians’ while at university in Berlin precipitated a change in study from law to philosophy before contributing to Marx’s farewell to academia and entry into journalism, a move which forced him to deal for the first time with economic matters. The precise impact of Hegel’s philosophy upon the intellectual products of Marx’s subsequent labours has nevertheless been the source of much disputation. The challenge that Frank Ruda sets for himself in Hegel’s Rabble: An investigation into Hegel’s Philosophy of Right is to forge a new path in this well-trodden terrain. He does this by treating a marginal issue in the Philosophy of Right – the emergence of a rabble of paupers from the wealth of civil society – as a symptom of the limitations of Hegelian political philosophy as traditionally conceived. Such a reading exposes Hegel’s failure to fully grasp the contradiction of modern society as the starting point for Marx’s elaboration of the proletariat and with it the transformation of the relation between philosophy and politics.

The legacy of Hegel’s political thought has itself been far from uncontested. While its most notable impact has been that wrought through various Hegelian Marxisms, it has equally been derided as the source of fascism by the likes of Karl Popper. More recently, Francis Fukuyama made yet another use of Hegel’s thought in his glorification of capitalist democracy as the society at the end of history. Ruda’s work clearly fits into the first of these traditions which he extends by holding up the figure of the rabble as a prism through which to view the Hegel-Marx relation. This involves moving beyond the tired formulae of inversion which ‘have become part of philosophical doxa that obstructs and reifies that which is at stake in the transition from Hegel to Marx’ (2). Instead Ruda hypothesises an ‘irritation of philosophy by politics’ (3) that, being embodied in the figure of the rabble, is the discernible place within Hegel’s philosophy from which Marx’s concept of the proletariat originates. Ruda is not the first to notice the interconnections between Hegel’s description of the rabble and Marx’s writings on the proletariat. Works such as Shlomo Avineri’s Hegel’s Theory of the Modern State have already highlighted the uncanny Marxian inflections of Hegel’s discussion of the poor, both in his early writings as well as in his mature Philosophy of Right. The treatment of these echoes and reverberations in Hegel’s Rabble is far more systematic than those found in previous studies and it enlarges such scholarship in its use of the transition from the rabble to the proletariat to delineate a ‘Marxian transformation of philosophy’ centred on the axes of ‘subject, justice, equality’ (5). Such a reading rightly emphasises that, after Marx, philosophy can no longer preserve itself from the ‘peculiarly singular logic of politics’ (4).

Ruda’s initial aim is to outline the inadequacy of Hegel’s discussion of the rabble which comes down to his refusal to allow it to contain any determinations and his dismissal of it as a merely ‘negative understanding’ (59). The first six chapters develop the notion of poverty in Hegel’s Philosophy of Right and his discussion of the way in which a rabble may emerge. As Ruda notes, the problem of poverty in modern society is seen by Hegel, in proto-Marxian fashion, as a necessary product of the richness of civil society to which he proposes numerous measures varying from state intervention to charity. Hegel himself seems to have been unsatisfied with these solutions and, in a somewhat resigned phrase, notes that ‘The important question of how poverty can be remedied is one which agitates and torments modern societies especially’ (Hegel 1991, 267). It is this strangely un-Hegelian failure of the dialectic to resolve one of its own moments that attracts Ruda’s attention. But Ruda goes further in demonstrating the role of a ‘subjective operation’ which is necessary to convert this objectively produced substratum of the poor into a rabble. This is then followed by an examination of the different forms of rabble which may be found in Hegel’s work, the division between luxury- and poor-rabble being the most interesting.

In the remaining chapters Ruda moves beyond the explicit discussion of the rabble in the Philosophy of Right in order to uncover a genuine solution to the problem of poverty which Hegel was unwilling to entertain. To do this Ruda counters Hegel’s repression of the rabble with a spiralling of determinations that unveil its true potential. But, as Ruda says, ‘the problem that the poor rabble displays exceeds Hegel’s conceptual and philosophical categorisation’ (64), and so the first point of interest this raises is the source of these new determinations. Ruda’s detailed and thorough investigation suggests that they can be extracted from materials within the Hegelian corpus itself, even if one has to branch out into the more esoteric regions of the Philosophy of Nature to find them. However, it is clear that many of the determinations utilised in Hegel’s Rabble actually have their source in twentieth century, predominantly French, thought. Thus the rabble assumes the guises of Giorgio Agamben’s ‘homo sacer’, Alain Badiou’s ‘inexistent’, Jacques Rancière’s ‘part of no part’, and Slavoj Žižek’s ‘organ without a body’. Once constructed, this figure is used to demonstrate Hegel’s failure to fully embrace the rabble is due to its logical implication being nothing less than ‘a call for a sublation of the Hegelian state’ (166). Rather than confront this paradoxical self-sublation of his system, Hegel could only leave a marker of the place at which Marx would start his own attempt at a solution.

It is the borrowing of conceptual tools from contemporary philosophy which is perhaps the most problematic aspect of Hegel’s Rabble. This becomes especially clear in the coda when Ruda finally turns to Marx’s elaboration of the proletariat. We can now see that the reconstruction of the rabble has been presented in place of an exegesis of Marx’s works in which the transition from Hegel is effectuated such that Ruda repeats this transition himself before comparing notes with the young Marx. We thus find an exposition of some of Marx’s early works – in the main his ‘Introduction to a Critique of Hegel’s Philosophy of Law’ and the ‘Economic and Philosophical Manuscripts’, both from 1844 – in which it is claimed that Marx’s notion of the proletariat is, in its essential aspects, equivalent to the figure of the rabble outlined in the main body of Ruda’s text. What is surprising about this selection of works is the neglect it pays to Marx’s own paragraph by paragraph critique of sections from Hegel’s Philosophy of Right, to which Ruda seldom refers. Readers turning to this text may be surprised further that Marx himself did not zero in on Hegel’s discussion of the rabble and instead focused his critique elsewhere. In any case perhaps the bigger concern is the unproblematic reading into Marx’s writings of concepts generated by thinkers such as Žižek and Badiou who are often referred to as ‘post-Marxist’. Such a strategy can only present us with the conclusion that the young Marx was, in fact, a post-Marxist.

The reward for such a reconfiguration is the resurrection of Marx’s humanism, although, through Ruda’s reading, this becomes ‘an angelo-humanism, a humanism of impossibility’ (179). Ruda deploys such a term to both affirm the identity of contemporary thought with that of Hegel, inasmuch as he cites both Hegel and Badiou as its inspiration, while attempting to avoid the negative response that Marx’s humanism has sometimes received in certain philosophical circles. Marx’s notion of species-being is now seen as a process in which an unlimited set of new determinations can be appropriated in the perpetual creation of a human essence beyond the strictures of capitalist society. In such a process a ‘specific impossibility is converted into a possibility that has to be thought in the temporality of the future anterior’ (177). It is by highlighting the political project of realising what is dismissed as impossible that Ruda’s work may gain a contemporary political relevance.

The price we pay for this new conception is the obfuscation of the development of contemporary French philosophy from the numerous crises that have beset the Marxist tradition following the impasse of Stalinism. This is particularly strange given that the concepts Ruda draws on, such as Badiou’s ‘inexistent’, have been developed precisely to overcome the historical inadequacy of Marx’s own theorisation of revolutionary transformation. If Ruda’s reading of Marx is correct, it both removes the inadequacies of Marx’s writings that generated the conceptual framework which Ruda uses and at the same time, in vulgar dialectical fashion, it reduces such developments to the singularity of the young Marx, and ultimately to the one of the rabble. Such a reduction is itself symptomatic of the conceptual indebtedness which Ruda highlights of Marx’s proletariat to Hegel’s rabble. This diminishes the importance of the more familiar description of Marx’s discovery of the proletariat through his reading about, and later direct experience of, French workers struggling in the movement that would culminate in the 1848 revolutions. It is in any case not clear how such an emphasis on a conceptual undercurrent should ‘irritate’, as Ruda has aimed to show, a philosophical discourse which is nothing other than conceptual.

We can now return to the hypothesised Marxian transformation of philosophy. This in itself is a curious characterisation of Marx’s work given that he was more concerned to exit philosophy than to transform it. The question then remains as to why we should describe Marx’s critique of philosophy as its transformation, a question which is perhaps not answerable by looking only at certain works of the young Marx. Ruda’s claim that this transformation, if we accept such a term, centres on the notions of subject, equality, and justice is also questionable as it jars with Marx’s critique of such bourgeois categories. To make sense of this conception we need to ask a question that, though it remains tacit in Hegel’s Rabble, emerges as its guiding motivation: What figure of Marx can adequately mediate between Hegel and contemporary French philosophy? The answer is, in the end, a humanist Marx, but not in the human sense, rather in the angelic.