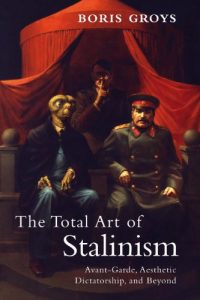 Boris Groys
The Total Art of Stalinism: Avant-Garde, Aesthetic Dictatorship, and Beyond

Verso’s edition of the Charles Rougle 1992 translation of Boris Groys’s The Total Art of Stalinism (originally published in German in 1988 as Gesamtkuntswerk Stalin) is a welcome reprint of one of the very few books that bucked the trend by tackling the subject of Stalinist culture in the heyday of glasnost and perestroika. In fact, very few scholars at that time inside or outside of Russia saw Stalinist culture as a worthy subject. Literature under Stalin was catered for by Katerina Clark’s The Soviet Novel: History as Ritual while architecture was dissected by Vladimir Paperny’s Culture 2 (written in the early eighties). Art under Stalin would have two contenders: Igor Golomstock’s book on Totalitarian Art was the volume arguably most fitted to the weltanschauung and research interests of western academia, bolstering the strategy of ring-fencing so central to the liberal discourse around civilization and totalitarianism. However, it was Boris Groys’s short tract on Soviet art, much more problematic for many at that time and attacked on many fronts, which would undermine most attempts to categorise it and yet prove to be one of those texts both long resistant to classification and still fresh a quarter of a century later. Groys, by paradoxically challenging the articles of faith of so many perspectives (whether liberal, social democratic or even Trotskyist) and highlighting the similarities between the Russian avant-garde and Stalinist Socialist Realism as well as debunking the myth of innocence of the early revolutionary avant-garde, takes the reader on a dizzying tour – led on by Groys’s delight in paradox – derobing them of their every previous certainty. What makes Groys’s account stand out is his attempt to provide an account which highlights continuities rather than breaks in the Soviet experiment. In fact while the title invokes Stalin, Groys clearly has set out to describe the space of art in the entire Soviet period. No conventional account of this subject it, at times, seems to mimic the gnomic excesses of Stalin’s Short Course in order to capture central features of the early Modernist avant-garde, Socialist Realism and Post-Utopian art trends from Moscow-based Conceptualism to the Sots-Art of Komar and Melamid.

In many ways Groys can’t be located as a ‘pure’ researcher in this field. Trained as a mathematician and linguist, Groys was actively and directly involved in the unofficial art scene of the Brezhnev period, striking up friendships with many of the artists whose work he describes in the final section of his tract. Not simply discordant with accepted academic or political perspectives of the time, it achieved something quite novel by breaking out in its entirety from Cold War geographical realities and separate western and Soviet styles of discourse, opening up radically new perspectives by turning its glance away from the established tropes about Socialist Realism. Explaining his choices, Groys clearly avoids the martyrological approach and what he calls the ‘body count literature’ (in vogue amongst both western academics and Soviet dissidents), arguing that if it is ‘morally permissible to write about aspects of Christian theology without mentioning the number of victims of the Inquisition or the Crusades, or to write about democracy and human rights without quantifying the number of citizens who lost their heads to the guillotine in the name of these values, then it must also be possible to write about the Soviet Communist project while leaving readers who are interested in the Communist body count to satisfy their curiosity by turning to the numerous books devoted to precisely such grisly calculations.’ (126)

In the place of body count literature and hagiographical accounts of early Soviet martyrs, Groys gives the reader a history not of the Soviet reality but ‘a history of the Soviet imagination’. (126) In this way instead of offering a history of twentieth century Russian or Soviet art he offers more an account of how society was reorganized aesthetically. He also briefly explains why and in what way Russian society had been ‘aesthetically far better prepared for revolution than the West … far more willing to organize all life in new, as yet unseen forms, and to that end allow itself to be subjected to an artistic experiment of unprecedented scale’ (5). Groys then goes on to find the common thread between the modernist avant-garde who welcomed the revolution precisely through their enthusiasm for remodelling the world according to their own whims and the new Stalinist Socialist Realism which transcended and discarded the lessons and the ethos of the avant-garde but remodelled the world by using certain aspects of the avant-garde vision. Groys wants to destroy the myth of an innocent avant-garde and doesn’t accept the idea of Socialist Realism as a return to traditionalism seeing in it instead as a kind of foretaste of post-modernism. While modernism in the West had been defeated in its project to restructure the context of everyday life, this “was accomplished in reality by Stalin” and whereas Western post-modernism had arisen through the defeat of the modernist avant-garde, the Soviet post-apocalyptic version had arisen from this belated victory of the avant-garde and the restructuring of the whole life environment under its own impulse. (109) As well as his attempt to describe the movement from modernism to Socialist Realism, in the third chapter, Groys turns his gaze towards the movement from Socialist Realism to the post-utopian artistic paradigm of the 1960s to the 1980s. Not only does he try to ‘describe successive paradigms but also the mechanism of their succession’ (13).

In fact, the section almost ignored in Groys’s tract when the book first appeared in the late eighties and early nineties is the one devoted to Post Utopian Art. This silence was one of the reasons why Groys’s small work had been so misinterpreted and why a reprint has been so necessary (but, to my mind, not sufficient). In many ways one’s vision of the early avant-garde period and the Socialist Realism period are clearer still if observed from the perspective of the Brezhnev period: in artistic currents at this time there emerged a space still much misunderstood (or simply ignored) by western art critics. Unfortunately, at that time Groys was still only able to offer an impressionistic view of this period. Groys subsequent writings accompanied the Russian version of this book (Groys 2003) but have sadly failed to be included in Verso’s reprint. Groys’s preface to the Russian edition gives us some further clues as to how he contextualises art paradigms from a more straightforward Marxist perspective (rather lacking in the 1988 edition) stating that “Both on the ideological as on a practical level the unofficial culture of the Brezhnev period can be evaluated in such a way as above all the formation of post-industrial, consumerist capitalism in Russia”. (Groys 2003, 17)

Groys’s major work can still remain almost as frustrating and irritating as it must have done over two decades ago when first printed in German as Gesamstkuntswerk Stalin in 1988 (a Wagnerian allusion missing in the English title). The central image that Groys had in mind (and which has since been adapted by scholars like Evgeny Dobrenko (2007) who sees Socialist Realism as a means to produce reality) was of Soviet reality being a ‘unified multimedia staging … a total work of art able to fully swallow and integrate within itself its spectator’ (Groys 2003, 10). In turning established views on their head, in delighting in resolving by paradox certain nagging doubts we have reading his text which lead us to suspect that he is simply taking us on a journey as surreal as he asserts Socialist Realism to be, in unnerving our every steadfastly held perception, we are left dazzled rather than clear-headed. Yet these defects in the work are also their greatest advantage because Groys manages to keep what Schwabsky (2009) called a “Sphinx-like neutrality” to Stalin. Groys himself makes this his own claim for superiority of his account to those of Paperny and Clark, saying that they mistakenly assume ‘that Stalinist culture somehow falls outside the historical process … this assumption suggests that, though these scholars may be critical of Stalinist culture on the conscious level, subconsciously they have been transfixed by its claim to have transcended history.’ (64) He returns to this theme in his criticism of militant anti-Stalinist art and literature (for example the village prose writers) favouring instead contemporary post-utopian art because the ‘latter uses the lesson it has learned to make this defeat (of Stalinism) obvious and final, overcoming the Stalin period by mythologizing and aestheticizing it … the art that continues actively and virulently to polemicize with and demythologize Stalinism fails, for it shares with Stalinism the inadequately articulated utopian impulse’ (114-15). Our failure to understand Groys’s exact relation to Stalinism is given another twist in his scattered but rather insistent comparisons of the new Soviet reality with the beginnings of Christianity. Here, for example, he speaks of Stalinism as a kind of established Church ‘sanctifying’ the original ascetic revolutionary forces:

The relationship between Stalinist culture and the avant-garde is similar to that between the established Church and the first ascetic sects: in both cases the blessings of the old world were first renounced after the victory, exploited and “sanctified” in the new age. (42)

All in all Verso are to be commended for offering this historically seminal text which demonstrates the aesthetic ramifications of the political as well as the dependence of the political on the aesthetic during the Soviet century. The break with nature that, for Groys, made the Russian Revolution far more radical than previous revolutions (including the French) building ‘the new society as a completely artificial construction’ (121), contextualises the need for such a text even though it seems to be written from a position strangely devoid of explicit Marxist concepts. In many ways, though, Groys’s paradoxical work deserves to be read in conjunction with a number of other authors. One of these is Mikhail Ryklin’s liberal yet suggestive tract Communism as Religion: Intellectuals and the October Revolution. It is Ryklin, the liberal, who depicts a more forceful historical distance between Lenin and Stalin which is surely more relevant once again in the present context (in 2009 he stated that ‘Lenin has been blackened, made a scapegoat. Stalin has been scrubbed clean’ (Ryklin 2009)). Moreover, the works of Mikhail Lifshitz now being reprinted once again in Russia offer another voice – one of those many marginalised Marxists (another example being the philosopher Evald Ilyenkov) – whose writings are only being rediscovered after the collapse of the Soviet Union. Voices which, like Groys’s, were dissonant then and are still dissonant now. Reading Groys in such company permits us to imagine alternative narratives while rescuing some of the debris from the historical storm that was the Russian revolution and its aftermath.