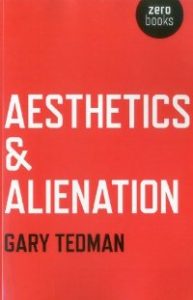 In Aesthetics and Alienation Gary Tedman aims to develop the ‘notes towards an investigation’ that comprised Louis Althusser’s I970 work Ideology and Ideological State Apparatuses. Althusser proposed that capitalism reproduces its conditions of production by non-repressive, ideological state apparatuses (ISAs), increasingly using the education system and other institutions to reproduce not simply technical skills of production in individual workers but also submission to the rules of the established ruling order and its ideology. He listed eight ISAs, including cultural and communications ISAs alongside the educational. They work by a process of ‘interpellation’ or ‘hailing’. Althusser gives one everyday example: a policeman shouts ‘Hey, you there!’ and I turn, and in doing so I become a ‘subject’. ISAs then effectively transform us from pre-ideological individuals to subjects (when we do not turn, we are no doubt subjected to repressive state apparatuses). Tedman is concerned “that a concept of feeling is missing from [Althusser’s] argument” and wants to import “subtle human qualities” into a broadly Althusserian account. (42)

Tedman’s main contention is that our submission to ‘hailing’ is an affective response, and so requires appropriate affective techniques to be effective in delivering the Althusserian, ideologically replete subject prepared to labour or manage under capitalism. The thesis relies on a series of arguments by extension – that affective responses refer us to the idea of the ‘aesthetic’ (loosely characterised as activities dealing with human feelings and sensibilities); that professional art is especially concerned with the aesthetic level of practice; and that art therefore operates as an aesthetic state apparatus (an ASA).

Tedman’s argument is particularly vulnerable at two points and counter-arguments here challenge the claim for the centrality of an art ASA explaining capitalism’s ability to reproduce its conditions of production. First, what we mean by an affective response and its relation to aesthetic experience. Second, what is involved in art making and appreciation and how it is related to cultural and communications apparatuses.

First, Tedman’s category of ‘aesthetic’ encompasses all affective responses and so fails to discriminate between features of experiences that are simply pleasurable or desirable, or have a distinctive emotional quality, from aesthetic responses. The latter are distinctively evaluative, so that while an aesthetic experience may be ‘hailed’, still it requires hailer and hailed to evaluate the object of the experience. Typically we distinguish between pleasurable activities like sport, drinking and eating, fashion and so on, and our aesthetic experiences of objects that sustain critical discussion around aesthetic concepts like ‘graceful’, ‘balanced’, ‘tight-knit’. Indeed Tedman slips between a view of ASAs as encouraging the simply ‘human animal’ aspects of human existence, which he lists as the pleasures of eating and drinking and so on (55), and a view of them as manipulating ‘aesthetic techniques’ like ‘architectural design’. (60) Throughout the text Tedman conflates and confuses sensory and aesthetic experiences, leaving it difficult to assess the credibility of the claims that ASAs effectively ‘compel false ideas about our working lives’ (51), since we ordinarily understand our aesthetic responses to objects and situations to be at least qualitatively different from, for example, a thirst quenched. (Tedman’s defence of his ‘loose categorisation’ of the aesthetic as embracing all art, sensuality, emotion and sexuality, design and issues of beauty is the specious one that any tighter categorisation would necessarily lead to theory of beauty, and thus falsely identify the conditions for something being beautiful).

This leads to the second difficulty. Tedman lists art colleges, advertising agencies, university design departments, schools of design, the fashion industry and so on as the state apparatuses tasked with ‘assignments’ to deal with the ‘raw feelings of alienation’ that our quotidian working lives engender. (53) Aestheticians working in these art ASAs are particularly skilled in sublimating feelings of alienation and disaffection in workers through the creation of a ‘hypnoidal kitsch’ culture, typically using techniques of ‘repetition and sentimentality’, so the argument goes. (64) But is this a strictly aesthetic level of activity? Tedman stipulates an idea of the aesthetic and the practice of art and related institutions rather than providing detailed examples and sustained analysis. So the task of the art ASA is to ‘refine everyday aesthetic life into an official Aesthetic’ (175); and its main activity is the production of kitsch to divert our felt sense of alienation into consumption. (184) Much more than that, Tedman seems unable to provide. We need to say two related things in this regard. It is right – there is a strong prima facie case at least – to argue that state apparatuses work to create individuals that function essentially as efficient workers and consumers; but that practice is neither exclusively nor essentially aesthetic. For example, if we examine kitsch art, we can agree with Tedman about its qualities and effects without a necessary commitment to his art ASA thesis. Rather, like the gallery cleaner in Tedman’s example throwing out the art mistaking it for rubbish, we might dismiss kitsch as ‘rubbish art’ (as he does too). (190) The serious point being made here is that our affective responses to artworks might open up the realm of aesthetic concepts and evaluations based on how an object has been made. Such a focus on making might then reveal, rather than hide, workers’ own felt sense of the alienating effects of their work. The thesis that kitsch art is ‘hypnoidal’ and pervasive both misses the possibilities for affective responses to artworks that are aesthetic and disalienating, and that the state apparatuses producing ‘sophisticated kitsch’ in general are better analysed in terms of communications and marketing strategies involving 24/7 digital technologies.

To reiterate, Tedman’s strategy broadly supports both Althusser’s scientific account of the state apparatuses that transform us into subjects and reproduce capitalist conditions of production and a belief that feelings are of greater determinacy than ideology in effecting societal reproduction. But the idea of an aesthetic state apparatus only gains credence – seemingly explaining how people are ‘fooled’ by tradition and custom amenable to ruling ideologies, since ‘emotional attachments are effective over long periods on our daily lives’ (46) – by the false step of conflating a wide range of physiological and emotional hailings and responses (‘interpellations’) with the ‘aesthetic’. But with this false move, an examination of a reasonable intuition about ideology and affective states skews into a discussion of art aesthetics. So, for example, Tedman draws on Walter Benjamin’s arguments in The Author as Producer as supporting the contention that state apparatuses operate aesthetically, especially where Benjamin “considers the material (aesthetic) form of the interpellation, the sensual mediation of the idea”. (162) But Tedman offers no quotes from Benjamin and does not attempt systematically to develop Benjamin’s argument in support of ASAs. Indeed Benjamin’s answer to the question he sets himself – what is the relation between a work of art’s political tendency and the relations of production in a society? – might be argued to support a view that the ways things are made (with aesthetic interest even, that is with an interest in a product’s authentic creativity, design and workmanship) allows works to transcend ruling ideological considerations. Aesthetic evaluation of a product in terms of how it is made, in other words, might reveal the maker as a mere ideological ‘operative’, but equally it might reveal him or her otherwise. But Tedman only very briefly contemplates a positive account of artful or aesthetic making. And this is part of a more general problem, wherein individuals as subjects are effectively never more than the loci of state-directed interpellations. The idea of self-generated aesthetic interest and experience free of state ideological influence is difficult to entertain in an all-embracing scientific schema. Tedman quotes a long dictionary entry for ‘Play’ in all its various meanings to support the view that “art at bottom is play”, but the idea is not developed as a proto-aesthetic activity contrasting with feelings of alienation that might then ground an alternative account of their relations. (238) Tedman is reluctant to investigate these thoughts further, given the Althusserian, anti-humanist view he is trying to develop. The fear of a humanistic account (expressed throughout the text) is that it effectively counters the account of individuals as ‘subjects’ by allowing the possibility of individuals flourishing as ‘humans’. But the latter idea does not necessarily imply the idea of a fixed human essence; we have a shared neurophysiology but our adaptive responses to situations vary. We can envisage then – indeed we live through – alienating conditions of production that are ameliorated by state institutions (broadly conceived beyond mere government) using all kinds of psychological, emotive and art-related techniques. But unless we collude (unwittingly even) in a narrow view of the aesthetic, we can still conceive of disalienated, aesthetic lives, and develop them where we can, the best we can.

Finally then, Tedman’s reluctance to develop a positive account of the aesthetic relates too to the absence of any constructive dialectic with theorists other than Althusser. Any serious examination of the relations between the aesthetic and alienation, and of the role of art institutions, should engage (and this represents no more than some first thoughts): the ideas of English socialists associated with the Arts and Crafts movement and beyond, from William Morris to Herbert Read; Jean-Paul Sartre’s account of bad faith and alienation in terms of the exemplary, authentic choices of artists; Jacques Ranciere on the relationship between art, aesthetics and politics, especially the notion of the ‘distribution of the sensible’; and properly engage, rather than caricature and dismiss as little more than propaganda, philosophical aesthetics (especially ‘institutional-artworld’ theories and the Everyday Aesthetics thesis) more generally.