Marx & Philosophy Review of BooksReviews‘Value in Marx: The Persistence of Value in a More-Than-Capitalist World’ reviewed by Matthijs Krul 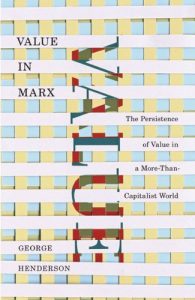 George Henderson
Value in Marx: The Persistence of Value in a More-Than-Capitalist World

George Henderson’s Value in Marx is touted as a work on Marx’s value theory that not only elucidates its contents, but goes beyond traditional readings of Marx to forge new ways of thinking about value and social relations. Now, anyone familiar with the vast literature on Marx’s economic thought will recognize that as a familiar claim, more often promised than actually fulfilled. This book, however, is an exception to that rule. While showing an awareness of the considerable literature on applications of value theory to real world historical and political phenomena, it develops theoretical insights which have hitherto remained underappreciated or ignored within Marx’s conception of value itself.

Most of the book is dedicated to the working out of Henderson’s central thesis, one that I have found increasingly important but that is rarely remarked upon even in sophisticated commentaries on Marx’s value theory: namely, Marx’s double use of the concept of value. In one sense, value is the familiar concept specific to capitalism, in the sense of ‘capital in motion’, measured by socially necessary labor time. This value has been written about extensively since Marx by a range of commentators from David Harvey (against whose work Henderson seems to be reacting) to Andrew Kliman, Michael Heinrich, Ben Fine, and a host of other Marxist economic and social thinkers. This sense of value is also the basis for most applications in Marxist economics. Whatever the many disagreements on the meaning of value in this sense, and on the problematics of Marx’s value theory (such as the transformation of values into prices), all the commentators agree that the value Marx speaks of in Capital is value in capitalist society only. It does not apply beyond these specific constraints, and the law of value Marx develops describes only the laws of motion of capitalism as a mode of production.

However, there is behind this a more hidden, occasionally intruding different sense of value: value as a transhistorical concept, and it is this that George Henderson is interested in. As he notes, in many discussions of value in the restricted sense, Marx suddenly interrupts his narrative in Capital with some reflection on the ‘society of associated producers’, the socialist mode of production of the future. These interruptions, Henderson argues, are not just often oddly placed and appear as it were to burst into the technical-scientific narrative of describing capitalism itself, but they also seem to rely on a sense of value that goes beyond the merely capitalist. Indeed, as this book aims to show, for value as a category in capitalism itself to make sense and yet to make room for the possibility of transitioning from this type of society to a society of associated producers, it is necessary that it be something that has a more transhistorical nature than merely that of immanent laws of motion of this particular society. It is necessary that it points beyond itself. To my mind, it has long been an oddly neglected element of historical thinking about value, as opposed to thinking purely in terms of the laws of capitalist economics, that Marx uses value in a transhistorical sense as well.

While Henderson often uses playful (and sometimes irritatingly vague) philosophical language, and constantly seems to draw out his point only to recoil from the consequences of his own thought, I think the central argument of the book can be summed up quite clearly: that is, the value in capitalism that Marx describes in Capital is itself merely a special case of a more general sense of value, namely the necessity for any society whatever to organize a division of labor and to coordinate the production and exchange of goods such as to effectively reproduce that society. This Marx also seems to call value, of which the value of Capital is only the case relevant to capitalist society. To understand this, however, requires constantly very clearly distinguishing in which sense value is being used, and therefore the domain to which its use is properly confined. Henderson himself does not always succeed at this, sometimes apparently conflating the two senses, which generates contradictions in this text.

One also need not share all his judgements on the more philosophical elements of this work, especially when he discusses the implications of Marx’s suggestions about the nature of value in the society of associated producers and its relation to the ‘realm of freedom’ conquering the ‘realm of necessity’. The last third or so of the book is dedicated to working out some of the vague notions that Marx presents on this subject, and while intriguing, seems to me to put more weight on a few dispersed sentences and comments than they can properly carry. Nonetheless, Henderson here also makes a more significant theoretical move, beyond merely (re)discovering the transhistorical element in any value theory. He suggests, somewhat following Postone and other writers, that the point of the society of the associated producers would be not just to make value transparent, in other words to make the division of labor and the production and exchange underlying any society a consciously planned and collective effort, but also to reduce this element to a minimum.

He also suggests, provocatively, that in capitalism itself value never manages to fully realize itself. It is a kind of elusive entity only asserting itself through the operation of the everyday phenomena: price always deviates from value, the credit system and hoarding show that money cannot fully represent value in a direct way, and Marx’s discussion of the ‘labor chit’ proposals of the Ricardian socialists shows that an attempt at making value immediate and transparent within capitalism would actually work worse than the present money form, which works precisely because value is never quite directly present in its own form. Henderson concludes from this that the society of the associated producers would render clear the transhistorical content of value precisely by abolishing its indirect, hidden nature as it is in capitalism: the reduction of necessary labor time and thereby achieving the realm of freedom (at least to some extent) would be the result. In this sense, capitalism could be seen as ‘the failure of value production’, whereas the socialist society of the future would realize value, in both senses of the word.

Henderson’s book contains a considerable wealth of insights on the tension between the specific and the general, the capitalist and the transhistorical nature of value despite its comparative brevity (fewer than 150 pages of text) and its often postmodern twists and turns of language and narrative. Marx’s famous irritated response to Kugelmann in 1868, reacting to the demand of the critics that he ‘prove the existence of value’, was precisely to point out that value as an objective, transhistorical category is completely trivial once understood: any society must reproduce itself and achieve a division of labor and a system of commensurability of goods that allows this to take place. But the significance of this letter for locating his value theory in Capital in a wider perspective has often been overlooked. For myself, the historical consequences of understanding Marx’s value theory for capitalism, as being a specific case of a more general law, have been a concern since I became aware of the distinction, but Henderson has at least as productively oriented this thinking towards the future. For Henderson, the persistence of value at the transhistorical level shows how capitalism is a system never quite fully complete or consistent in itself, and how rendering transparent this transhistoricity would both require and make possible a socialist society.

It also provides him with material for philosophizing about the opposition between necessity and freedom that would characterize such a society. After all, if on the one hand the transparency of the social reproduction of society is the basis for considering the associated mode of production superior, but on the other hand such labor is to be minimized to maximize creative free time, this produces an odd internal tension. Henderson suggests, perhaps overinterpreting Marx’s loose comments on the persistence of Greek art, that such a universal limit extending beyond its own time and place as classical art represented for the Enlightenment thinkers could also be the goal of a socialist society. That is, the dichotomy could be overcome by the people in such a society choosing to express themselves in ways that make transparent the limits of what even a socialist society could do.

Overall, this, then, is the ‘persistence of value in a more-than-capitalist world’: the reminder that capitalism is nothing if not historical, an epoch in human history with a tremendously vigorous, exploitative, and most of all opaque dynamic, but nonetheless one which is only one species of a whole genus of human attempts at living together to produce and exchange the means of our existence in one form or another. The historical, anthropological, and political implications of thinking about value in this way are not to be underestimated, and Henderson is to be commended for bringing it once more to our attention, even if his way of doing so is sometimes exasperatingly circuitous.