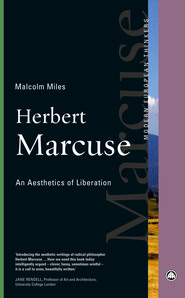 The period of Herbert Marcuse’s greatest influence on the left is well in the past. He was key in the Frankfurt School and one of the most prominent intellectuals associated with youth, student, and countercultural revolts of the 1960s. Many studies of his work appeared up until the mid-1980s; a few more followed the publication of his Collected Papers, which began in 1998 under the editorship of Marcuse scholar Douglas Kellner. Malcolm Miles’s recent introductory text, part of the Modern European Thinkers series from Pluto Press, is then a welcome opportunity to reassess this long-marginalised philosopher and his perspectives on art and politics.

The main body of the book begins and ends with separate chapters on Marcuse’s final major work, The Aesthetic Dimension, from 1977. Miles, there, emphasises the consistencies within Marcuse’s body of writings over the decades, particularly the ‘validation of aesthetics’ (6), the critique of Marxism’s traditional conceptions of art, and the critique of Soviet doctrines of socialist realism. The middle chapters have a more chronological trajectory and step through significant shifts in Marcuse’s life and thought, as well as in the political situation, from the 1920s to the 1970s. The book concludes with a chapter applying Marcuse’s ideas to twentieth and twenty-first century artists and their works.

Marcuse’s titles best-known during the high period of his prominence – such as Counter-Revolution and Revolt – are not the only ones featured in the book. Included as well are texts unpublished or difficult to access in the English language during that high period – such as ‘Society as a Work of Art’, from 1967 – many of which are now compiled in the Collected Papers.

There were, over time, changes as well as continuities in Marcuse’s aesthetic theories. One of Miles’s central arguments is that those changes can best be understood in terms of their changing historical contexts: from the failure of most European revolutions in the 1920s; to the Great Depression in the 1930s; to the upheavals of 1968; to the subsequent Nixonian reaction and neoliberal offensive of the 1970s. There is thus a recognition of the shifting political valences of Marcuse’s shifting thought on art (whatever its putatively timeless or universal qualities).

For instance, Marcuse’s essay ‘Some Remarks on Aragon’, from the mid-1940s, examines works written during the Second World War by Louis Aragon and Paul Éluard. Miles contention is that Marcuse reads Aragon’s romantic novel Aurélien and Éluard’s love poetry, despite the seemingly depoliticised character of their two respective genres, as enabling, ‘in conditions of terror, the remembrance of freedom’; this remembrance must, in the situation of the time, be ‘found in a literature of intimacy, such as love poems’ (70). That kind of work provides ‘an oblique reflection of the immediate reality in narratives located in the scenes of private life’, for within ‘the conditions of the Nazi occupation of France, politics was abolished’ (73). This obliqueness is underscored by the fact that one of Éluard’s poems Marcuse is scrutinising, Liberté or Une seule pensée (A Single Thought), was cleared by government censors – who missed the work’s encoded political meanings – for open publication in France; it was later clandestinely air-dropped in bulk over the country by Allied forces as literary ‘propaganda’.

A second instance is Marcuse’s perspective, during the upsurges of the 1960s, that ‘the most Utopian, the most radical possibility of liberation today’ is ‘an aesthetic reality – society as a work of art’ (101). Miles contends that the aim of this aesthetic reality would be to fracture, in Marcuse’s Freudian terms, the repression and deferment of pleasure; that deferment, a foundation of the existing order, is ‘like a voice over the shoulder saying wait until tomorrow’ (99). ‘In 1967, the message was that we want the world and want it now’ (99).

The counterculture’s new sensibility can be viewed as an instance of such an aesthetic, particularly the politicisation of the personal. Traditional left politics of ‘deferment’, of long-term projects for high-level change, such as the insurrectionary overthrow of the capitalist state, were eschewed, along with the attendant relegation until ‘after the revolution’ of a large set of putatively superstructural oppressions. This allowed for a molecular politics which could be immediately and directly applied to the spheres of everyday life, one outside any orientation vis-à-vis the state or other major institutions: feminism; sexual liberation; intentional and experimental communities; a ecologically-sensitive rejection of consumerism; the free university movement; de-schooling; and consciousness raising, for example.

Marcuse viewed such a subjective potential as based in the long-term objective conditions, not limited to the decade: the ‘affluent’ society, as well as the development of technology and forces of production. However, his aesthetic is also clearly influenced by the optimism of the 1960s.

A third instance is Miles contention that, contrary to some critical interpretations at the time of its publication, The Aesthetic Dimension is hardly defeatist. Marcuse proposes, not that ‘aesthetics is a substitute for politics in a period of despair’, but instead that ‘aesthetics is politics, taking a world of fiction – or imagined reality – as an oblique route to real change’ (10). According to Miles, this ‘presents a viable strategy in the circumstances of the 1970s’ (11), a decade in which ‘new realism was necessary [given] the failure of revolt in 1968’ (128). The difficulty is how such imagined worlds are actualised; the separation between the realm of being and the realm of art enables the envisioning of a different world, which Marcuse underscores in 1977, but also can disable intervention in that realm of being.

That disabling is more apparent in Marcuse’s earlier theory of affirmative culture, advanced in the 1930s: ‘[i]f bourgeois art is characterised by displacement of the idea (or the ideal) of freedom to an inner realm … then the idea of a free society is a beautiful illusion by which … the dominant society’s mechanisms of social and economic ordering [are] untroubled’ and thus affirmed (46-7). This does not fit well into a continuity – that of the validation of aesthetics – hypothesised by Miles of Marcuse’s work as a whole, as Marcuse’s later thinking has a more positive assessment of art’s liberatory potential.

Miles is non-committal on the viability of a number of Marcuse’s theses. Characteristic is his response to the query ‘can a representation of freedom displaced through art remind the spectator of a really possible freedom?’: ‘I leave the question open’ (53).

Of Picasso’s Guernica, a paradigmatic case of politicised art, Miles worries about its ultimate ‘co-opt[ation] into the narrative of modern art’, a ‘system of signs … operat[ing] as another form of affirmative culture’ (152). He thus registers the concerns of much current art theory, particularly that of the critique of institutions: museums, galleries, and apparatuses for the production of art. Simultaneously, Miles argues that, for Marcuse, ‘even in bourgeois art there is a truth content which has meaning beyond the circumstances of its class character’ (130); and, to go even further, ‘[h]ow it is received depends, after all, on … the spectator’ (152). There is a disjunction between the two approaches – the former materialist, and the latter idealist.

An extended encounter between those approaches would be needed, including questions such as: how audiences, the vast majority of whom are not part of the art world proper or an apparatus of art production, read works; and whether such interpretations are strongly structured by a material apparatus for the reception of art, or whether they can be autonomously driven by political concerns from outside that apparatus; and whether, in the present strategic conjuncture, a political decision to simply subtract a left understanding of art from those material restrictions is useful. Miles is not able to do so in the concluding chapter’s limited discussion. Such an confrontation could have further strengthened Miles’s thesis concerning the political valences of Marcuse’s shifting aesthetics, which are, certainly post-1968, dependent upon art being comprehensible outside its original circumstances, whether class or institutional.

Of German artist Joseph Beuys, Miles points out ‘Beuys’ claim that everyone is an artist’ and the implication ‘that everyone has a creative imagination, and can hence imagine new social as well as aesthetic formations’ (153). There is a similarity here to Marcuse’s 1960s-era ideas. Strikingly, Miles does not confront the now-commonplace scepticism of such ideals as legitimating and materially enabling the neoliberal capitalism which ensued; a capitalism which is characterised by, among other things, creative ‘knowledge-based’ labour and its attendant subjectivities adapted to the necessary dynamism, flexibility and heterogeneity. Once again, such a confrontation could have further strengthened Miles’s thesis concerning the political valences of Marcuse’s shifting aesthetics: the approach (society as a work of art) which made sense in the 1960s becomes politically problematic afterwards, given its assimilation into developing neoliberal capitalism; therefore, a new approach (aesthetics as an oblique route to real change) is required.

Drawing on the most current and most comprehensive collections of his writings, and richly detailing the historical backdrop to the movement of his thinking, this book is a valuable introduction to Marcuse on aesthetics. For today’s left, Marcuse demonstrates the possibilities for a dynamic understanding of art and politics based on the demands of changing strategic conjunctures. Marcuse, further, offers theoretical resources rather different from the dominant frameworks for understanding art and politics, and Miles’s contribution is an invitation to critically reexamine those frameworks in light of the Arab Spring, the Squares movement in Europe, Occupy, and other openings that have arisen since 2011.