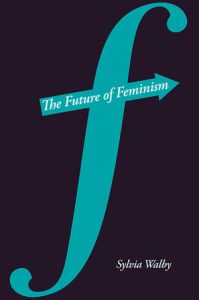 Sylvia Walby
The Future of Feminism

The Future of Feminism concerns more than the challenges, possible contributions, and stakes for feminism in moving forward. Although Sylvia Walby identifies and discusses challenges for feminism’s future development, one of the book’s central purposes is to rebut claims arising from a variety of sources (including academia and popular media) that the feminist movement has ceased, dispersed or become ineffectual. This is how the book begins, and much time is dedicated to explaining recent feminist enterprises and successes, as well as some current configurations that the feminist movement takes. Because of this, a significant portion of the book will have more to offer for individuals who are either unfamiliar or only passingly familiar with feminism, who are searching for an explication of feminist goals and activity and/or some account of feminism’s current status, than it will for individuals who are already consciously engaged with feminism. The section of the book that an individual who already identifies as feminist (or else is strongly sympathetic toward feminist goals) is apt to find most interesting – discussion about feminism’s future – will be more rewarding or more disappointing depending on her/his perspective as to whether capitalism can be successfully regulated in the interests of the population.

Walby’s contention is that not all major feminist projects are given the label ‘feminist’ and that several now occur in an institutionalized context – as such, these ‘institutionalized forms are less recognizable as feminist by those who are accustomed to thinking of feminism as merely visible protest’ (2). She rejects self-definition as a necessary condition for individuals/groups and their projects to count as feminist, because this excludes those that have goals associated with feminism (e.g. equal pay for equal work and protections for women against domestic abuse) but do not adopt the term for (at least) one of various reasons (3). To cling to such a stringent definition of feminism is one of the mistaken grounds for concluding that feminism has largely disappeared. Walby considers having the goal of reducing gender inequality as an alternative condition for being feminist, but also rejects this for being too exclusive as a necessary condition, asserting that there are ‘significant numbers of women’s organizations which do not have the goal of “reducing gender inequality”, but rather of “advancing the interests of women”’ (4). Hence, she counts as feminist those agents and activities that are aimed at reducing gender inequality or toward advancing the interests of women (5). It should be noted though, that Walby aspires to avoid reductionism and essentialism concerning gender, contending that there ‘is no simple, monolithic, timeless category of “woman”, whose “interests” would be obvious’ (123). How then does one determine what the interests of women are, which are supposed to be advanced? Her answer appears to be that this gets determined through negotiation and consensus (27). Here she points to the UN Platform for Action as ‘the most influential listing of feminist issues’, claiming that it ‘has been accepted as a global standard by feminists around the world’ (30).

Much of The Future of Feminism is spent either explaining some aspect of feminism or has an empirical orientation (e.g. reviewing recent changes to how gender relations have been structured within different contexts and at different levels of analysis). The second chapter describes and rejects various positions regarding feminism’s demise – for instance, the view that feminism has been superseded by `raunch culture’ (19-21). The third chapter explicates various feminist groups and their activities within the institutional domains of economy, polity, violence and civil society (31). The fourth chapter explains different organizational forms that feminism currently takes, for example as NGOs or as components of ‘epistemic communities’ (55-7, 63). The purpose of these chapters is to illustrate the continued existence of the feminist movement in spite of the fact that it has become less visible to the popular imagination, and in virtue of the numerous examples she discusses, to this end Walby is successful.

When it comes to feminism’s future, where Walby examines particular challenges for feminism, the discussions have some insight to offer but nevertheless fall short in some respects. The first of the challenges that Walby considers involves gender mainstreaming, which she describes as ‘a new form of feminist strategy, which engages with existing configurations of power institutionalised in the state’ (80). The challenge here that arises for feminism pertains to performing gender mainstreaming in a manner that will successfully promote feminist goals (80). While Walby provides an informative discussion, she spends little time considering one of the most daunting worries about gender mainstreaming that she herself points out. This is the concern that interactions between feminist individuals/groups and established institutional powers will result in the abandonment of important feminist components, including radical ideas and demands, if these individuals/groups become drawn and assimilated into the status quo (9, 57, 80). She focuses her discussion on aspects of and potential difficulties for gender mainstreaming that, while having implications for its successful implementation, do not directly speak to the fear of individuals or agencies becoming more focused on the promotion of personal or partisan interests at the expense of women’s advancement, or that those enmeshed in these powerful institutions will come to adopt perspectives that are too uncritical of dominant practices and/or too parochial for feminist aims. While the other things that Walby attends to are worth addressing, it is disappointing that she does not give extended discussion to this worry, forgoing a discussion of examples and possible solutions and/or responses in moving forward.

The second of the challenges for feminism that Walby considers is neoliberalism, since neoliberal contexts are hostile toward the women inside them for various reasons (157). She describes, for example, how neoliberal countries have ‘a less developed regulation of men’s violence against women than social democracy has’ (115). An additional and major reason that Walby views neoliberalism as a threat to feminism, however, is because she attributes the cause of the financial crisis to neoliberalism (117, 157). She successfully demonstrates how the financial crisis and its aftermath has had gendered dimensions, discussing (for instance) how the cutting of public services as a response to financial deficit has disproportionately affected women due their being more dependent on these services (118). Combined with other examples, such as how reductions in budgets can lead to cuts in public programmes aimed at reducing violence directed at women, Walby indicates that such financial crises interfere with feminist goals (158).

That feminism should be opposed to the spread of neoliberalism is a point well taken. Where the discussion falls short though is Walby’s treatment of capitalism, and the taken for granted position (in this text at least) that it is not the nature of capitalism that lead to the financial crisis, but rather that the crisis is ‘a consequence of the excesses of neoliberalism’ (157). Within the scope of this book, there is no serious engagement with Marxist literature on the cause(s) of the financial crisis, and Walby accepts the possible success of social democratic regulation of capitalism, without addressing Marxian criticisms concerning its feasibility and longevity. This lack of critical engagement with Marxian economics will no doubt grate with Marxists. Not addressing concerns regarding the long-term feasibility of regulating capitalism will also be disappointing for anti-capitalist feminists who agree with Walby that gender inequalities are not reducible to class inequalities but form a complex interaction (110, 113). For instance, if capitalism is in fact an inherently unsustainable economic system (regardless of the form through which it is expressed in relation to the regulations imposed on it via state power), then in light of the problems financial crises pose for feminist prospects, opposing the spread of neoliberalism will not be sufficient. But discussion along these lines is absent from the book, thus presenting a vision of feminism’s future that uncritically limits it to co-existence with capitalism in a more social democratic climate or in a more neoliberal climate. A brief critical observation on Walby’s discussion of the third challenge for feminism echoes this criticism. This third topic concerns the intersection between feminist projects and certain other political projects, with the challenge being the formation successful coalitions (10, 125). Consideration of the possible intersection between feminist projects and Marxist projects, and the possible advantages and/or drawbacks of coalitions between feminist and Marxist advocates, is missing from the discussion.

Individuals who have a vague notion concerning feminism and/or its current standing in the world will find an informative discussion in The Future of Feminism with the potential to enhance their understanding. The later discussions regarding feminism’s future development have some merit as well, but readers who are more optimistic about the long-term feasibility of regulating capitalism in the interests of the population will find more to appreciate than those who do not share in that optimism, and it will be understandable for individuals in the latter group to take issue with their concerns being glossed over in this book.